In an erratic day of trading that saw natural gas futures swing between gains and losses several times, the prompt month eventually finished in the red despite the potential for a surge in freezing temperatures and robust heating demand in late January. 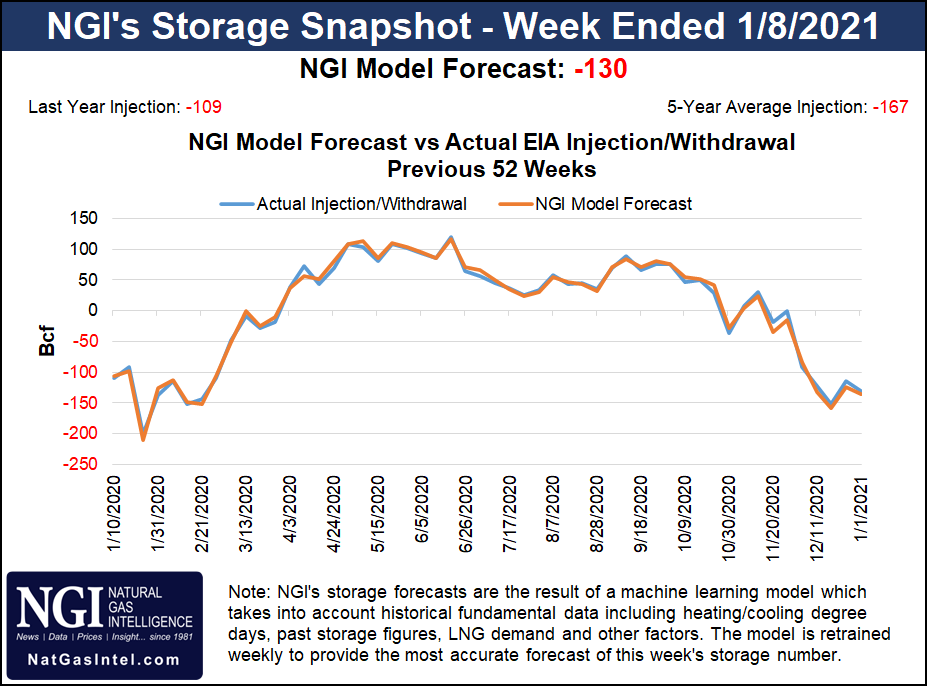 NGI’s Spot Gas National Avg., meanwhile, shed 8.0 cents to $2.845 amid mild temperatures across most of the country Wednesday and expectations for continued comfortable conditions through the end of the trading week.

The Global Forecast System (GFS) early Wednesday extended milder trends for Jan. 23-27, a period during which forecasters expected frigid air to sweep down from Canada and spread across broad sections of the Lower 48. While both domestic and European models still pointed to a significant cold snap, the GFS trended warmer again at the midday run, shedding expectations for the deep freeze to extend very far over the southern and eastern portions of the country.

“This ‘kicking the can down the road’ as far as when we can finally see cold” across most of the United States “definitely has promoted skepticism in whether or not it ever does verify,” Bespoke Weather Services said. The firm added that its outlook still showed “notable cold at least in the central and western” portions of the country before January ends.

Aside from weather uncertainty, other key drivers trended in the favor of gas prices. Lower 48 production has held steady this week, shy of 90 Bcf and below year-earlier levels, while export volumes propped up overall demand. U.S. LNG climbed above 10.6 Bcf on Wednesday after briefly dipping below the 10 Bcf level a day earlier. LNG volumes had hovered near or above 11 Bcf all of last week as a brutally cold start to winter and waning domestic supply in northern Asia bolstered demand for American gas.

“The global LNG market remains on fire,” EBW Analytics Group analysts said, noting a harsh winter blast forecast for Europe, as well, along with a shortage of LNG tankers.

“With Asian temperatures expected to moderate next week,” EBW said, “the focus may soon shift to the European market.”

So far this winter, LNG deliveries to Europe have averaged 5 Bcf/d less than year-ago levels. However, “with Europe about to face its coldest weather in years, one trader reports that his firm has already drawn down its gas in storage to zero,” EBW analysts said. “If weather conditions are as cold as expected, European hub prices could spike sharply, with some market observers predicting end-of-winter heating-season storage could sink to as low as 1.15 Tcf, 900 Bcf below year-ago levels. Bullish sentiment among securities analysts is continuing to increase.”

In recent days, analysts at both Tudor, Pickering, Holt & Co. and Goldman Sachs predicted that mounting demand for U.S. LNG could drive the American benchmark Henry Hub to the $3.50 level before 2021 ends. Raymond James & Associates Inc. was more aggressive, predicting that futures could reach $4.00 by the end of 2021.

The U.S. Energy Information Administration’s (EIA) latest Short-Term Energy Outlook released this week showed researchers expect prices at Henry Hub to rise to an annual average of $3.01 this year and an average of $3.27 in 2022.

A day ahead of EIA’s storage report for the week ended Jan. 8, a Bloomberg survey found estimates ranging from withdrawals of 120 Bcf to 141 Bcf, with a median of a 129 Bcf decrease.

NGI modeled 130 Bcf withdrawal for this week’s report, which would be on par with the pull that EIA reported for the week ended Jan. 1. That withdrawal reduced inventories to 3,330 Bcf, though stockpiles remained above the year-earlier level of 3,192 Bcf and above the five-year average of 3,129 Bcf.

Meanwhile, the coronavirus continues to wreak havoc in many regions of the country as more than 4,300 people died of the disease Tuesday, a daily record, even as the United States is releasing more vaccines in an effort to quickly inoculate Americans 65 and older, the cohort most vulnerable.

In Washington, DC, lawmakers in the House impeached President Trump for a second time, accusing him of inciting the violent mob that rampaged the U.S. Capitol last week.

Analysts at ClearView Energy Partners LLC said the near-term fallout from the political acrimony is likely to be even more intense partisanship in the months ahead. The frictions could “harden ideological battle lines” and ultimately impact the energy sector in the form of more regulatory scrutiny.

“Federal law also gives the president’s party,” which in President-elect Joseph Biden’s case, is the Democrats, “majorities on most of the independent commissions that also implement federal policy. By tradition, most of these institutions have functioned as bipartisan, apolitical bureaucracies. In recent years, however, we have seen glimmers of partisan resource linkages at the Federal Energy Regulatory Commission and the Nuclear Regulatory Commission, among others. Acrimony could accelerate that trend.”

Next-day cash prices tumbled on Wednesday as high temperatures climbed into the 40s in regions including the Upper Midwest and Great Lakes, which are often frozen in mid-January. Forecasts called for continued relative warmth over the next two trading days and through most of next week.

Maxar’s Weather Desk said over the next six to 10 days, “the period averages on the warm side of normal in the Midwest and East, while “warming temperatures and unsettled conditions are associated with low pressure tracking through the South at mid-period.”

Against that backdrop, spot prices declined in every region on Wednesday.