Natural gas futures forged ahead Monday, rebounding from a 7% drop the previous week, as forecasts for colder air late this month and early next galvanized bulls. News Monday that a key export facility was another step closer to reopening after a fire last year added to the momentum. 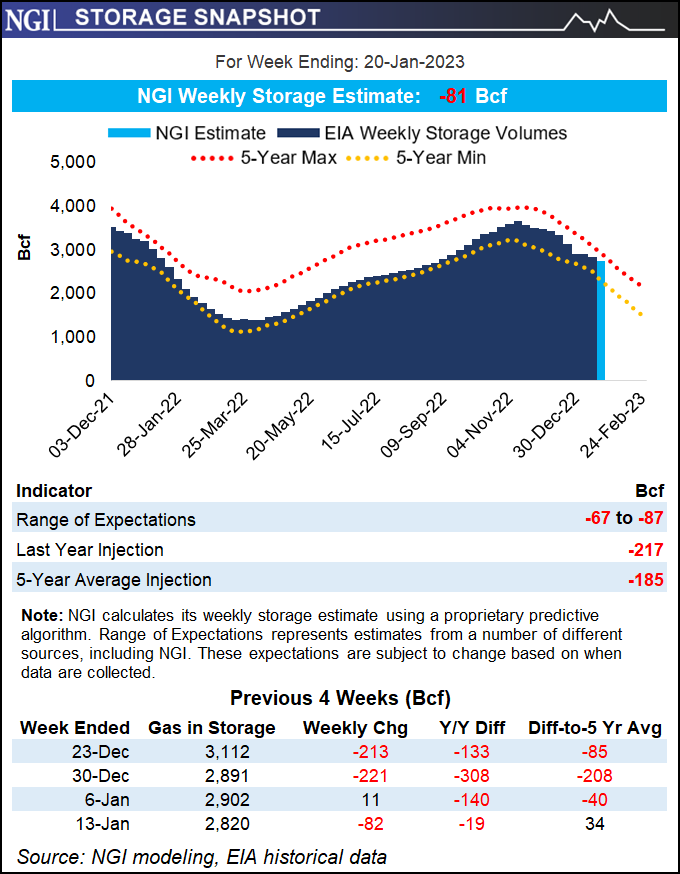 Production remained strong – and near record levels – at around 101 Bcf/d. However, while the benign weather that weighed on markets last week was expected to persist a few more days, a turn colder is on the horizon.

NatGasWeather said data over the weekend trended “sharply colder” for the period starting this weekend and continuing through Feb. 5.

“A frosty system will sweep across the Midwest Friday to Saturday. It’s this Midwest system that opens the door for a series of frigid shots over Canada to advance aggressively into the northern and central U.S. Jan. 29-Feb. 5,” bringing low temperatures ranging from the 20s down into the negatives, the firm said.

The outlook for this period “is now easily frosty enough to be considered bullish,” but “it would be more impressive if the South and Southeast were colder instead of remaining relatively comfortable,” the firm added.

The subfreezing air is projected to retreat to “cover just the northern tier Feb. 6-8 for moderating national demand,” according to NatGasWeather.

EBW Analytics Group senior analyst Eli Rubin noted the weather shift, too, though he also emphasized that rallies so far in 2023 have proven short lived, given robust output and mostly mild weather to date.

“Natural gas has struggled to sustain nascent gains in recent weeks — and a similar bearish pattern reversion may prevail later this week,” Rubin said. “Even impending cold weather may not curb oversupplied conditions.”

The U.S. Energy Information Administration (EIA) most recently reported an inventory decrease of 82 Bcf for the week ended Jan. 13. That was far from the five-year average draw of 156 Bcf and the year-earlier pull of 203 Bcf.

The decrease for the Jan. 13 week lowered inventories to 2,820 Bcf but left stocks above the five-year average of 2,786 Bcf. It followed a rare January injection of 11 Bcf reported a week earlier.

Looking ahead to the next EIA storage report on Thursday, analysts are generally expecting another weak draw relative to recent years. Early estimates for the week ended Jan. 20 submitted to Reuters landed at an average decrease of 78 Bcf, reflecting continued mild weather.

NGI modeled a decline of 81 Bcf. That compares with a withdrawal of 217 Bcf a year earlier and a five-year average decline of about 185 Bcf.

“Suffice it to say this Thursday’s report will come nowhere near seasonal norms,” analysts at The Schork Report.

Analysts said the looming bout of winter may need to extend deep into February for bulls to maintain any momentum, absent the timely return of the Freeport LNG export facility in Texas.

Management of the liquefied natural gas plant is targeting a late January relaunch, aiming to quickly build up to 2 Bcf/d of capacity. Freeport would pull that gas from domestic supplies and offset recently soft U.S. heating demand. On Monday, executives at the facility said in a regulatory filing repairs were completed and they were seeking federal approval to begin the restart process.

Given a spate of regulatory hurdles, however, which delayed restart plans late in 2022, the market is skeptical about the timing. Rystad Energy’s Emily McClain, vice president, said that, without enduring cold or Freeport’s restart this month, “a material bullish impact is unlikely” this winter.

Long term, however, she and other analysts expect Freeport, as well as new LNG facilities slated to come online beginning next year, to play outsized roles in driving demand for U.S. supplies of natural gas. Given Europe’s rapidly fading reliance on Russian gas, the continent is projected to call for U.S. LNG to fill that void for years to come. Demand from Asia also is steady.

With the help of LNG, Europe was able to bolster its gas in storage for the current winter, relieving historically strong pricing pressure over much of 2022, RBN Energy LLC analyst Lindsay Schneider noted.

However, she added, “that’s not to say gas prices are low, as they are still well above historic norms and high enough to incentivize LNG imports and the development of future LNG capacity…The global gas market is fundamentally bullish.”

Spot gas prices sailed higher across the Lower 48 on Monday amid fresh signs of wintry weather reaching some areas this week and much of the country by the end of the month.

NatGasWeather said there were hints of winter to start the week, with a snowstorm exiting the Northeast Monday and rainy conditions developing over the South, including Texas.

However, the firm said, overall demand was expected to prove modest until the coming weekend, when a more impressive round of cold air is forecast to envelop the Midwest and Rocky Mountains. The freezing air is then projected to spread to the East next week, driving strong national demand.

NatGasWeather also noted the potential next week for wellhead freeze-offs that could interrupt production.

In the meantime, AccuWeather forecasters said rainy conditions this week in the South could present a wildcard. Meteorologist Mary Gilbert said as the storm passes over the southern and central United States starting Tuesday, it could cause drenching rainfall and severe weather around the Gulf Coast, and potentially heavy snow in the southern Plains that could cause power outages.

“Robust atmospheric energy tracking across the Southwest early this week will set the stage for a potent storm to take shape over the southern and central United States,” Gilbert said.