Natural gas prices rebounded Friday from a loss the day earlier as volatile weather forecasts shifted back to expectations for a severe winter chill in late January that could drive a surge in heating demand. 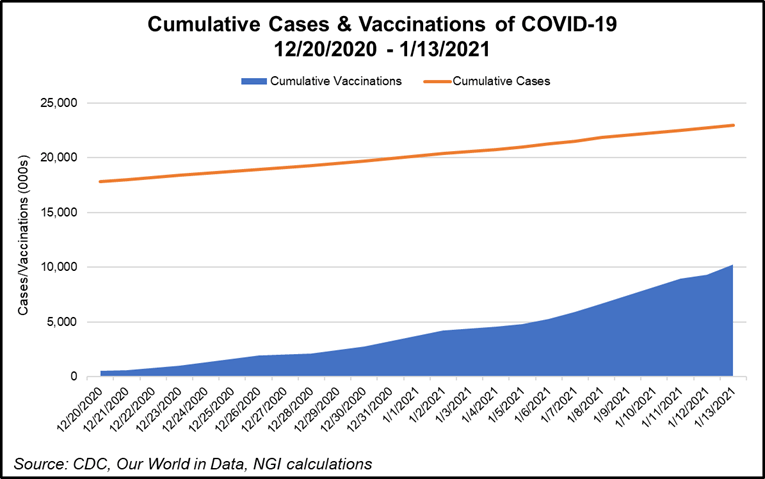 The February Nymex gas futures contract climbed 7.1 cents day/day and settled at $2.737/MMBtu on Friday. The advance more than made up the 6.1 cents lost a day earlier, when weather outlooks had tilted warmer. March gained 6.6 cents to $2.696.

“We finally see a colder pattern arrive here as we head into late month” focused on central and western portions of the Lower 48, “but with some cold bleeding eastward” under a North Atlantic Oscillation block in the Atlantic, Bespoke Weather Services said.

“Because the strongest cold looks to focus back from the Plains to the Pacific Northwest, it’s not an extreme pattern to the cold side in terms of national demand, but it’s easily the coldest we have seen all season long,” the firm added. “We continue to believe this can give us a couple of colder weeks before potentially moderating after the first week or so of February.”

Forecasts call for frigid air moving into the Northwest and Plains during the final week of January, with low temperatures ranging from well below zero to the 30s, then pushing east.

Robust U.S. LNG export levels over most of January add to the demand side and are providing additional support for futures, analysts said. LNG volumes, fueled by strong north Asia demand amid an unusually cold start to January, eclipsed 11 Bcf on Friday and hovered near record levels, NGI data showed.

Expectations are mounting that the combination of lofty export levels with intensifying domestic heating demand would result in steeper storage withdrawals in coming weeks.

The U.S. Energy Information Administration (EIA) on Thursday reported a withdrawal of 134 Bcf from natural gas storage for the week ended Jan. 8. That topped the year-earlier pull and the midpoint of analysts’ estimates.

A Bloomberg survey ahead of the EIA report landed at a median estimate of a 129 Bcf decrease. NGI modeled a 130 Bcf withdrawal. EIA recorded a 91 Bcf withdrawal for the comparable year-ago period. The agency reported a 130 Bcf pull for the week ended Jan. 1.

Based on historical degree day correlations, the latest EIA report indicated the market was about 3 Bcf/d undersupplied, according to analysts at Tudor, Pickering, Holt & Co. (TPH).

Looking to the next storage report, TPH analysts issued a preliminary forecast for a 175 Bcf draw.

Meanwhile, markets more broadly are looking ahead to the potential of widespread vaccinations bringing an end to the coronavirus pandemic as soon as the spring, a development that could pave the path for stronger economic growth and greater commercial energy demand.

President-elect Joseph Biden said he would ask Congress to approve $1.9 trillion in funding to help American households and businesses weather the shocks of a pandemic that continues to hamper the U.S. economy this winter. Biden’s plan includes $1,400 per person in direct payments as well as funding for virus testing and vaccine distribution.

Some economists have argued the additional stimulus is needed to bridge Americans from the depths of winter to a post-pandemic economy.

U.S. consumers cut their retail spending by 0.7% in December from the prior month – usually a strong month because of holiday gift-buying – the U.S. Commerce Department said Friday. It marked the third consecutive monthly decline. Employers also slashed 140,000 jobs last month, according to the U.S. Department of Labor.

The slumps in spending and employment emerged as virus outbreaks increased in the fall and early winter. Cases continue to climb. The United States recorded more than 229,000 new infections for Thursday, according to data compiled by Johns Hopkins University. It was the 10th straight day the figure exceeded 200,000.

“The pandemic surge will restrain overall economic improvement in the near term,” said Raymond James & Associates Chief Economist Scott Brown. “Many of the lessons of the 1918 pandemic — debate about masks and social distancing — have been repeated in this pandemic. One result is promising: When the 1918 pandemic had passed, people were eager to make up for lost time. We can expect rapid growth once vaccines are widely distributed. Until then, it looks like more of the same.”

Spot gas prices advanced Friday after a bout of harsh winter weather in the upper reaches of the central United States.

Blizzard conditions blanketed much of the Upper Midwest late Thursday and into Friday, and forecasters said the weather system, bringing both rain and snow, was expected to extend from the Great Lakes to portions of the East over the weekend.

Price gains generally were much more modest in other regions. In the Rocky Mountains, CIG picked up 5.5 cents to $2.635, while in Appalachia, Columbia Gas gained 5.0 cents to $2.580.

Friday’s overall gains aside, looking ahead to the third week of January, temperatures were expected to be above normal outside of the northern Plains and interior West, NatGasWeather said Friday. “With high pressure ruling most of the rest of the United States,” national heating degree days “will be much lighter than normal.”

The forecaster noted that gas prices may have to wait until late January and the anticipated widespread surge in cold to generate and sustain upward momentum.