The Fayetteville and Marcellus shales continued driving gains for Southwestern Energy Co. in the second quarter, giving it cause to increase its capital expenditures for those positions and a new venture in Colorado’s Niobrara formation. 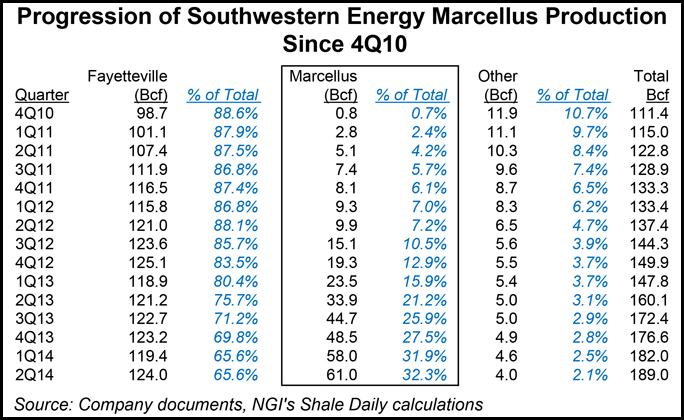 The company set a record in the second quarter, producing 189 Bcfe, up from 182 Bcfe in the first quarter and 160 Bcfe in the year-ago period (see Shale Daily, May 5). That exceeded the high-end of its quarterly guidance, and with Fayetteville and Marcellus wells performing better than expected, Southwestern’s full-year guidance has been increased from 740-752 Bcfe to 758-764 Bcfe.

While the Fayetteville in Arkansas and Oklahoma, where the company has been active since 2004, remained the clear breadwinner, producing 121 Bcf last quarter, Southwestern’s Marcellus program in northeast Pennsylvania is gaining ground. Production there was 61 Bcf, nearly double the 34 Bcf it churned out in 2Q2013.

“In the Marcellus, it’s obviously the best economics we have in the company and we try as best we can to put as much capital in that direction,” CEO Steve Mueller told analysts during a conference call to discuss earnings last week.

COO William Way added that “the cost per stage of frack has dropped rather significantly. We are seeing faster drilling times as we ramp up activity and get into the more manufacturing type mode that we enjoy in the Fayetteville Shale. So your drilling times have gone from 16, 15 days down to 11, 12 days, which is putting a lot of downward opportunity for us to capture on just the days to drill.”

In all, the company placed 23 Marcellus wells into sales last quarter. It has also included $50 million for drilling and lease renewals across 162,000 net acres that it acquired from Chesapeake Energy Corp. in northeast Pennsylvania last year (see Shale Daily, April 30, 2013). Ongoing tests in that acreage, combined with the efficiencies Southwestern has gained in the Marcellus, could find it placing 120 wells into sales there next year, about 20 more than it planned this year, Mueller said.

After the company acquired 306,000 net acres in northwest Colorado to target the Niobrara formation in March (see Shale Daily, March 5), it was unclear exactly how much capital it could dedicate to the program through December. With year-over-year production up 20% through the first six months of this year, Southwestern said it would increase its capital budget from $2.3 billion to $2.4 billion. The Niobrara asset will now receive $280 million, with five vertical wells planned for this year.

The company also said last week that it had agreed to acquire another 74,000 net acres in Colorado from an undisclosed buyer for $31 million.

Southwestern placed 126 operated wells online in the Fayetteville last quarter, where eight rigs will run for the remainder of the year with the bump in capital. More notably, seven of those were among the top 10 highest rate wells the company has tied-in since it started operations there. The Allison Trust well set a company record in the formation with a 24-hour test rate of more than 14 MMcf/d.

Net income was $207 million, or 59 cents/share, up from $190 million, or 54 cents/share in 2Q2013. Like other operators with a heavy presence in the Northeast, Southwestern said it took a hit on commodity prices.

Including the effect of hedges, the company’s average realized natural gas price was $3.77/Mcf, down from the $3.87/Mcf in 2Q2013. Mueller, though, said he sees demand for natural gas strengthening sooner rather than later.

“We feel better about gas price, too. It’s always a discussion point this time of the year, and especially in the heat of the summer, there is always the debate raging about what the gas price is going to be in the future,” he said. “We believe that most of the numbers point to the fact that this gap between supply and demand is continuing to narrow. We remain encouraged that we’ll be in a $4 world long-term, and we think that could happen late this year or early next year.”

With additional acreage in the Marcellus, Southwestern also said last week that it had reached an early agreement with subsidiaries of DTE Energy Co. to provide additional firm capacity to the Millennium and Tennessee Gas pipelines on the Bluestone gathering system in Susquehanna County, PA (see Shale Daily, May 16).