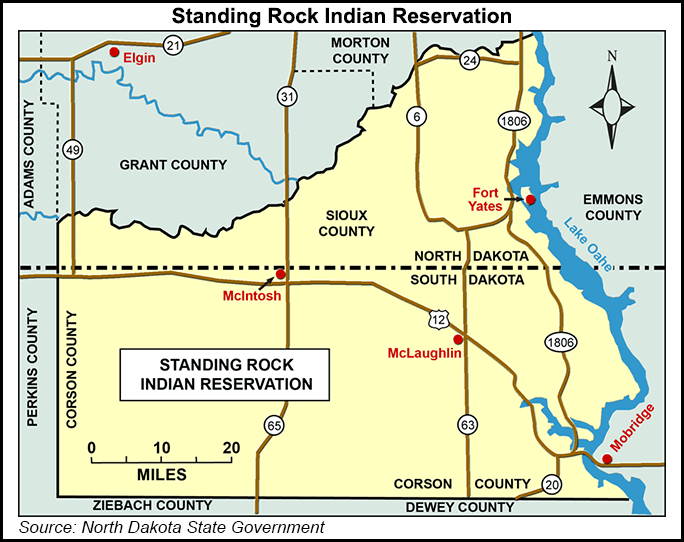 Backers of the $3.8 billion project were denied a request for a temporary restraining order (TRO) by a U.S. District Court for the District of Columbia judge. At the same time, the federal government proceeded with a new environmental review of the project.

More legal matters are set to unfold next month before Judge James Boasberg, who has sided with the four-state project for moving to market about half of the Bakken Shale’s daily production in North Dakota, only to be overruled the Obama administration. Ultimately, some analysts think the incoming Trump administration will free up the final construction if the court does not provide that pathway.

ClearView Energy Partners LLC, which monitored Wednesday’s TRO hearing, still concludes that there are “multiple paths ahead” for obtaining the elusive easement from the U.S. Army Corps of Engineers (USACE) to allow pipeline construction under Lake Oahe, a dammed portion of the Missouri River in south-central North Dakota.

Opponents of the project, led by the Standing Rock Sioux Tribe, whose reservation runs adjacent to the pipeline route near the lake, are banking on the more detailed environmental impact statement (EIS) on the entire project being required, causing months of delay. Boasberg’s TRO denial allows the EIS process to get started.

Separately on Wednesday, the U.S. Court of Appeals for the District Columbia Circuit dismissed the Standing Rock tribe’s months-old appeal of Boasberg’s ruling against issuing a preliminary injunction to halt DAPL’s construction.

The project, whose principal sponsor is Texas-based Energy Transfer Partners, sought the TRO to protect its ongoing cross-claim arguing that it should be allowed to finish the project based on obtaining an OK from the USACE last July granting the easement needed under the Minerals Leasing Act and as part of the Rivers and Harbors Act.

Last Tuesday, the USACE published a notice in the Federal Registerof its intent to prepare an EIS for the project. Previously, the federal Corps had fast-tracked DAPL without a full environmental review, tribal consultation or public input, according to the Sioux and various opposition groups aligned with the Native Americans.

It can be argued that nothing will have changed, as ClearView’s Christine Tezak did in an analysis released Wednesday, if DAPL wins its cross-claim and motion for summary judgment next month. The Native American tribes would surely appeal in the courts, but Tezak thinks it is not clear that those appeals would be successful.

The Trump administration also could grant the easement based on the record leading up to the earlier granting of the easement for crossing under the body of water.

While the USACE again issuing the easement would make DAPL’s cross-claim moot, Tezak said such action by the Trump administration likely will generate more lawsuits. “We view continued legal proceedings as likely given the project’s status as a cause celebre and the representations of the tribes in court [Wednesday] and in their briefs.”

Nevertheless, she said ClearView expects that DAPL may be able to complete construction and enter the facilities into service while legal proceedings are ongoing.

In North Dakota, tribal officials reported that clashes between protesters and law enforcement continued on Wednesday. The state Supreme Court partially granted a petition from the tribes to allow non-North Dakota licensed lawyers to more easily represent the estimated more than 600 protesters now facing criminal charges for their activities in opposing the pipeline construction last fall.