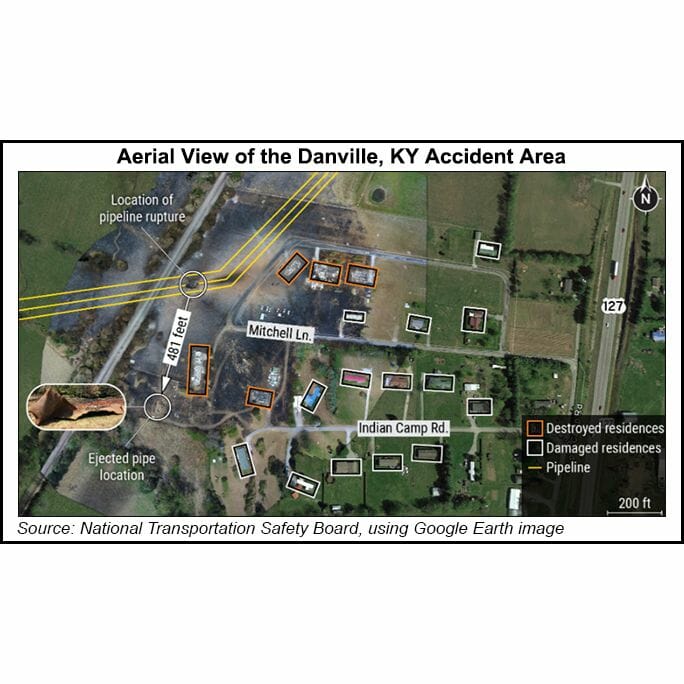 Investigators concluded “that the combination of a pre-existing manufacturing defect – known as a hard spot – together with a degraded pipeline coating and ineffective cathodic protection, led to hydrogen-induced cracking at the outer surface of the pipe.”

Cathodic protection, aka CP, is an electrochemical method for controlling corrosion of pipelines and other metal surfaces.

According to NTSB, Enbridge’s integrity management program contributed to the accident by failing to accurately assess the 30-inch diameter pipeline’s condition or estimating the risk from interacting threats.

NTSB said its accident report concluded that “Enbridge underestimated the risk posed by hard spots because its processes and procedures were inconsistent” with Pipeline and Hazardous Materials Safety Administration (PHMSA) guidance, as well as “industry knowledge of hard spot threat interaction.”

To compensate for increased external corrosion, Enbridge and previous owners of the system increased CP voltages on the affected pipeline segment, noted investigators.

“PHMSA will be reviewing and responding to these recommendations promptly,” a spokesperson told NGI. Pipeline failures like the Tetco incident “are not acceptable.”

Underscoring that, PHMSA “shares…NTSB’s commitment to preventing pipeline accidents,” the spokesperson said. The representative added the two federal entities have “a long history of cooperating and collaborating” on advancing the safety, reliability, and environmentally sound performance of U.S. pipelines.

“PHMSA continually seeks to leverage and evolve its oversight program, including changes to pipeline safety policies and inspection and enforcement approaches,” the spokesperson said.

A major tenet of “PHMSA’s oversight program is that pipeline operators must know and understand their pipeline systems and use appropriate technologies and procedures to address risk to prevent pipeline failures, while considering the inherent limitations of technology,” according to the spokesperson.

“PHMSA prescribes in detail the factors that must be addressed to mitigate risk and conducts inspections to ensure adequate measures are taken and carried out effectively.”

In addition, PHMSA’s research and development investments seek “to bring to bear the best expertise in the world to help improve technology, especially to improve detection methods relevant” to the Tetco accident.

“Enbridge takes these recommendations very seriously,” a spokesperson told NGI. “For more than three years since the incident occurred, we, in coordination with PHMSA and the NTSB, have worked diligently to understand the contributing factors to this incident and have made tremendous strides to change our procedures, processes and conducted extensive inspections in an effort to make our pipes safer than ever.”

The spokesperson said Enbridge is “leveraging technology, data and independent expert guidance to ensure the effectiveness of our pipeline integrity management programs across all of our assets. And we’ll share these findings with our peers to focus on enhancing industry best practices and continuous improvement.”