Exploration and production companies, as well as oilfield service operators, are paying education, housing and transportation costs to lure experienced and novice workers to the swollen oil and natural gas fields of the Permian Basin. 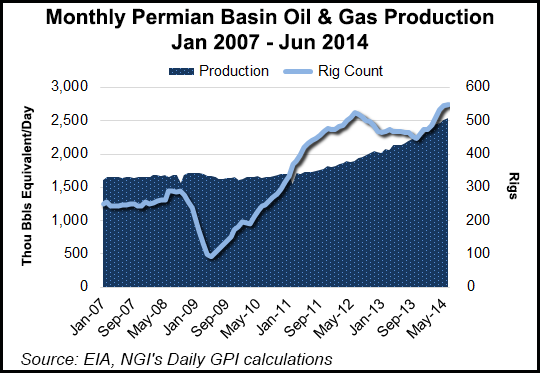 The empty, windswept plains of West Texas and southeastern New Mexico, where tumbleweeds the size of SUVs roll down the highways and blinding dust storms stretch for miles, belie the growing prosperity of the region’s rural, mile-wide communities, with some fast food workers making $20/hour and motel rooms going for $400 a night.

“Having studied the industry for a number of years, we were not surprised at the magnitude of the impacts from our researchers’ point of view,” Ewing said. “However, what stands out to us is the greater importance the oil and gas industry plays in the overall stability of the Permian Basin’s economy.

“The Permian is an important driver of not only the region’s economy but the nation’s,” and it will be for a long time into the future, Ewing said. In 2013 alone, he estimated that the industry across the two states had created and sustained more than 546,000 jobs, with an economic output of $137.98 billion. It also created more than $71.1 billion to the gross state products combined of Texas and New Mexico.

Those numbers likely already are higher as Permian producers increased their capital expenditures for 2014.

From a “business skills perspective,” said Ewing, “two areas of knowledge stand out to me as particularly important” to the area’s recent resurgence in new jobs growth: production processes and energy finance. Financiers have moved in, he said, allowing more firms to give perspectives on value.

That in turn has opened the door to educational opportunities.

“What I am hearing…is that companies are working directly with local development corporations to retain and attract workers,” said Ewing. “The implication is that more workers are needed, and specific programs put in place to bring in and attract workers from other regions.

“The other issue I am hearing is that there is a need for college educated workers in the oil and gas industry, especially with respect to those pursuing a career as a landman and also those involved with accounting…”

“The larger metropolitan statistical areas [MSA] in the region have lower unemployment rates than state and national averages,” he said. For instance, the preliminary end-of-year 2013 unemployment rate for New Mexico was 6.3%, and for Texas it was 6.0%.

Texas Tech researchers defined the Permian as the area stretching from Hale County, TX north of Lubbock to the Rio Grande Valley and into parts of southeastern New Mexico. It includes the Permian’s Delaware and Midland subbasins, as well as several known resource plays within the subbasins including the Wolfberry, Spraberry, Bone Spring, San Andres, Clearfork, Cline and Wolfcamp formations.

The economic impact, however, is felt not only in drilling and exploration, but also in all the ancillary industries that provide support.

“Ultimately, economic impacts derive from the exploration, drilling and production of oil and gas, which require a multitude of support activities for oil and gas operations,” researchers said. “These core activities, in turn, lead to a number of noncore but very critical midstream supply chain activities, such as pipeline, transportation, refining and equipment manufacturing.”

The “secondary effects” of oil and gas drilling and exploration impact not only suppliers to the industry but also wholesale, retail, real estate and housing and financial services.

Ewing pointed out some of the fascinating findings from the research. For instance, hotel rooms in the Midland-Odessa, TX area are going for $400, or more, per night. Trailer parks, even in neighboring towns like Snyder, Andrews and Seminole, have no vacancies because oilfield workers have moved in.

People have left careers they’ve trained or earned degrees for, or both, for the high-paying oilfield jobs. Fast-food workers today are earning close to $20/hour. There are shortages of other types of positions, such as school bus drivers, who have found much higher paying positions driving for energy companies.

However, the impact goes well beyond that, according to Ewing. Because of the way the industry functions in the area, he and his team concluded the region’s economy is becoming more stable and the growth sustainable.

“The more recent performance of the industry is linked to greater economic stability,” Ewing said. “Moreover, the research indicates the economics of the industry and region are sustainable. However, that is dependent on infrastructure and capital formation keeping pace.”

“The bottom line is, the economic engine that drives so much of this is just hitting on all cylinders,” said PBPA President Ben Shepperd.

“It can be a win-win,” for the entire area, said Ewing, “provided that the infrastructure can keep up with the potential growth needs of the industry and that the regulatory environment does not become too burdensome on growth and expansion, with respect to capital formation, transportation and midstream activities, to name a few.”

The Permian report marks the second one Ewing has helped produce this summer for the petroleum industry. In July, he was commissioned for a report on the economic impact the Texas oil and gas pipeline industry has on the state (see Shale Daily, July 21).