BP plc said Thursday it would appeal a U.S. district court ruling that found it grossly negligent for the April 2010 Macondo well blowout in the deepwater Gulf of Mexico, a ruling likely to cost billions in Clean Water Act (CWA) penalties. Contractors Halliburton Co. and Transocean Ltd. also were found negligent, but the court said their share of liability was “considerably less.” 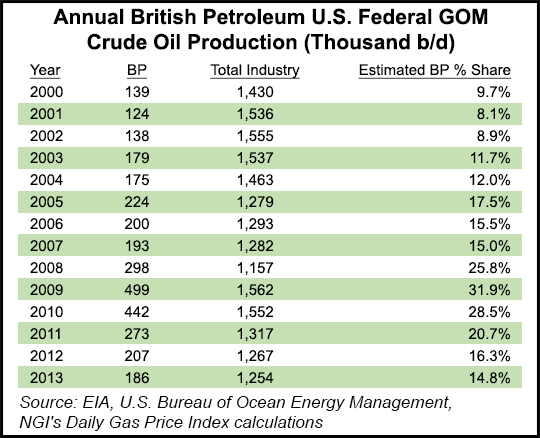 U.S. District Court Judge Carl Barbier of the Eastern District Court in New Orleans, who is overseeing the multidistrict litigation (MDL), issued a 153-page report of his findings and conclusions covering phase one of MDL 2179, which began Feb. 25, 2013 and concluded April 17, 2013. Phase two, which began Sept. 30 and concluded Oct. 18, was divided into two segments: source control, issues pertaining to the conduct or omissions relative to stopping the release of hydrocarbons; and quantification, regarding the amount of oil actually released into the Gulf. Phase three begins in January to determine the amount of oil spilled.

The well blowout and platform explosion killed 11 men and spewed oil into Gulf waters over a four-month period in the worst U.S. offshore disaster in history.

Phase one centered around the liability of operating subsidiary BP Exploration & Production Inc. and its contractors. It addressed fault determinations relating to the loss of well control, the ensuing explosion and fire that destroyed the Deepwater Horizon platform, the sinking of the platform, and the initiation of the release of oil from the Macondo well.

The Macondo well was in deepwater, adding “certain complexities not found in shallower waters or onshore,” Barbier said. “Furthermore, the high pressure and high temperature characteristics of the geological formation into which the Macondo well was drilled added complexity that is not present in all deepwater wells.

“These features increased the chance that a blowout, explosion, and oil spill would occur, which, in turn, further raises the standard of care.” BP’s well site manager accepted the negative pressure test, but it was misinterpreted, “for which BP bears most of the blame,” Barbier said.

As the well operator, BP “was ultimately responsible for interpreting the negative pressure test and declaring it a success or failure.” Even though BP’s well site leader on the rig later would “tell investigators that the results looked ‘squirrely’ to him…A reasonable company man…would have concluded that the test was a failure and that it needed to be reconducted based on the anomalous pressure reading.”

The court identified “several instances where Transocean’s conduct fell below the standard of care,” including “the drill crew’s misinterpretation of the negative pressure test” and its failure to properly maintain the blowout preventer.

“However, BP had a hand in most of these failures. With respect to the misinterpretation of the negative pressure test, BP was ultimately responsible for its interpretation, not Transocean…”

Barbier concluded that Transocean’s conduct “was negligent,” but its “share of liability is considerably less than BP’s.”

Regarding Halliburton, it had two failures, said the judge. One concerned cement and the other concerned well monitoring. With respect to the cement, “Halliburton’s conduct is egregious” before the incident and post-incident for destroying computer simulations.

“Nevertheless, because the court ultimately finds that the unstable foamed cement was not the cause of the blowout, no legal fault is allocated to Halliburton for these failures,” Barbier concluded. “Halliburton’s failure concerning well monitoring was relatively small when compared to others’ failures, and it was failure shared by Transocean’s drill crew.”

Based on the findings, Barbier found that BP was subject to enhanced civil penalties under the CWA. The court also found that BP subsidiaries, as well as Transocean and Halliburton, each are liable under general maritime law for the blowout, explosion and oil spill.

Following the ruling, BP said it did not believe the findings by the court were supported by the evidence at trial.

“The law is clear that proving gross negligence is a very high bar that was not met in this case,” said a spokesperson. “BP believes that an impartial view of the record does not support the erroneous conclusion reached by the district court.

“The court has not yet ruled on the number of barrels spilled, and no penalty has yet been determined. The district court will hold additional proceedings, which are currently scheduled to begin in January 2015, to consider the application of statutory penalty factors in assessing a per-barrel Clean Water Act penalty.”