It appears every time someone utters the word “Freeport,” the natural gas market gets itself into a tizzy. This time, though, the latest development in the wake of the LNG terminal’s explosion earlier this summer did nothing to alter its planned restart and thus should have had little influence over prices. 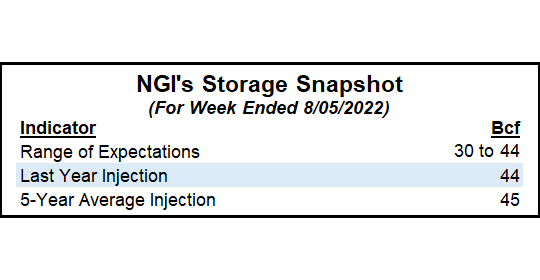 On the contrary, Freeport’s removal of its force majeure declaration following the June incident at the liquefied natural gas (LNG) facility helped send the September Nymex gas futures contract up another 36.9 cents to $8.202/MMBtu. October futures jumped 36.8 cents to $8.193.

With cooler weather starting to hit some key U.S. markets ahead of more widespread mild temperatures later this month, some downside in prices was likely midweek based on the latest weather models. Both the American and European models trended cooler, with any significant heat relegated to the West on into Texas.

There was some bullish momentum, however. For example, wind generation has fallen to “very low” levels as heat continues in the South Central United States, according to NatGasWeather contributor Andrea Paltrinieri. Power burns, he said, spiked to 47-48 Bcf on Tuesday, with wind generation expected to remain low through next week.

Het Shah of Analytix.AI said U.S. wind output currently was running around 32,000 GWh, a massive decline from the 43.4 GWh average seen both of the prior two weeks. Wind generation for the same week last year was sharply higher at close to 50,000 GWh, but lower at around 30,000 GWh in 2019, according to Shah.

Nevertheless, it was the details surrounding Freeport’s force majeure removal that likely jump-started the otherwise sleepy market, Shah told NGI. “My assumption is that the retraction of the forced majeure filing (and blaming human error), limits the investigation and lets them start up soon. So I believe the market is putting more confidence in the early-October start-up.”

That said, it takes little to drive huge swings in either direction. “The market is quite illiquid relative to last year – I think a function of traders being stopped out” and trading exchanges raising margin requirements, Shah said.

Meanwhile, bears have failed to crack the 50-day moving average, ICAP Technical Analysis’ Brian Larose pointed out. This suggests that “another attempt at lift-off” cannot be ruled out from here. If bulls are unable to quickly find their footing, though, he pegged gas prices at “$7.372, $7.258, $7.016, $6.888 and $6.611 as the steps to the downside we will be focusing on next.”

NatGasWeather said Wednesday’s rally put September prices back to higher on the week despite the weather data trending cooler for the next 15 days. With the European model forecasting national cooling degree days near normal the next 13 days, including a few days below normal, the pattern simply isn’t nearly as ominous as it’s the past few months.

“This suggests prices are higher the past few days due to factors other than weather, potentially production not being quite as strong compared to last week, or due to power burns overperforming due to light wind energy generation,” NatGasWeather said.

Alternatively, it could be for other reasons, according to the forecaster. Trader positioning ahead of Thursday’s storage report or the “news/non-news regarding Freeport LNG” also could have driven up the market.

“Essentially, a mix of bullish and bearish factors in play again, but with bulls winning the battle and spiking prices back over $8.00,” NatGasWeather said.

Looking ahead to the Energy Information Administration’s (EIA) weekly inventory report, estimates midweek were clustering near a 40 Bcf injection for the week ending Aug. 5.

Spot gas prices were mixed on Wednesday, with ongoing heat in the southern United States keeping upward pressure on demand, but heavy rains on the East Coast and in the Southwest and Rockies driving loads lower.

The National Weather Service (NWS) said a slow-moving surface front currently extends from the Mid-Atlantic region, back through the Ohio Valley, and into the lower Mississippi Valley and southern Plains. As the front continues to sag slowly south through the evening, very moist air ahead of the front will support showers and thunderstorms capable of producing heavy rainfall. This potential for heavy rainfall includes areas in the Ohio Valley and central Appalachians that have been recently impacted by very heavy rainfall amounts and flooding.

Showers and storms are forecast to continue across parts of the region into tomorrow before a secondary cold front sweeps across the region by late in the week.

“In addition to drier weather, this front is expected to bring seasonal to below-average temperatures into much of the eastern-third of the Lower 48 by Friday,” NWS forecasters said.

In Appalachia, Texas Eastern M-3, Delivery cash fell 6.0 cents to $7.415 for Thursday’s gas delivery, which was in line with the modest losses seen throughout the region.Price decreases on the West Coast were much more pronounced. In particular, Southern California posted stout declines at the SoCal Citygate, which fell 81.0 cents day/day to average $10.210 for Thursday’s gas day. The SoCal Border Avg. was down 75.0 cents to $9.595.