With bearish production pressuring prices, the natural gas futures market brushed aside another leaner-than-expected build from the Energy Information Administration (EIA) Thursday that showed deficits growing as August approaches. In the spot market, Southern California and Desert Southwest points continued to trade at elevated levels as conditions in the region remain hot; the NGI National Spot Gas Average finished even at $2.91/MMBtu. 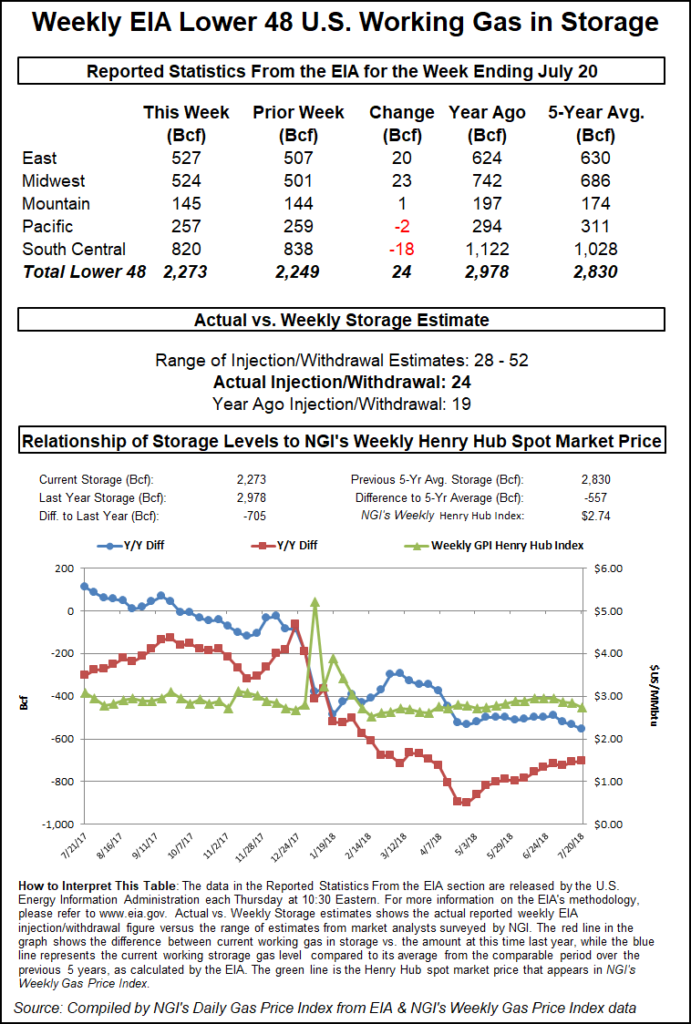 Over the course of trading Thursday prompt month prices “got up to roughly $2.80 but simply couldn’t hold it, notwithstanding the fact that we’re looking at weather” that would have been hot enough to rally the market in previous years, according to Powerhouse CEO Al Levine. This is “a function of the market’s inability to see beyond” bearish production data.

“If you were a bull,” the market making new highs earlier in the week offered “some hope that prices could move higher, but that has not been the case, and I can tell you that this is having an effect on the volume of trading as well” with production limiting upside risk for traders, Levine told NGI. “…How do you justify to your boss that you’re locking in winter supply when every month the price comes down to meet the current price instead of moving up to the futures price?”

Another bullish miss from the weekly natural gas storage report failed to spark much of a rally as the market continues to count on production replenishing stockpiles once summer heat subsides.

EIA reported a 24 Bcf injection into Lower 48 gas stocks for the week ended July 20, lower than most estimates and well below the five-year average 46 Bcf. Last year, EIA recorded a 19 Bcf injection. Last week’s EIA report covering the week ended July 13 also missed to the bullish side of estimates at 46 Bcf, as surging production has kept a lid on prices but can’t seem to shrink deficits.

Prior to the report, consensus estimates had the market looking for a build about 10 Bcf higher than the actual figure. A Bloomberg survey had produced a median 36 Bcf injection, with a range of 28 Bcf to 52 Bcf. Intercontinental Exchange EIA Financial Weekly Index futures came closer to the mark, settling Wednesday at an injection of 25 Bcf.

Bespoke Weather Services said the figure came in about 9 Bcf below its estimate, largely because of a “massive draw” reported for the South Central region.

“We had been looking for a small implicit revision from last week’s very tight print, but instead today’s print seemed to confirm last week,” Bespoke said.

By region, the South Central saw an 18 Bcf withdrawal for the period, including 16 Bcf pulled from salt and 2 Bcf pulled from nonsalt. The Pacific also posted a w/w withdrawal of 2 Bcf, while 1 Bcf was refilled in the Mountain region. The Midwest and East saw injections w/w at 23 Bcf and 20 Bcf, respectively, according to EIA.

“The natural gas market continues to shake off very bullish EIA data even as production levels sit off highs, seemingly complacent that we will have sufficient production this winter to cover any potential storage shortage that significant heating demand could bring,” Bespoke said. “Though this level of complacency appears increasingly risky, it does not appear the market will suddenly begin caring about storage unless we begin seeing production miss growth estimates.”

Turning to the spot market, locations in California and the Desert Southwest continued to trade at elevated levels Thursday amid an ongoing heat wave in the region, though day/day (d/d) changes were mixed. After several consecutive d/d losses since Monday’s record highs, SoCal Citygate rebounded Thursday, tacking on 78 cents to average $15.80.

The National Weather Service (NWS) forecast “dangerous heat” to “persevere into Friday as temperatures across the Southwest, California and parts of the Pacific Northwest continue to be well above average. Areas in the Southwest and Southern California can expect high temperatures near and above 110 degrees. This heat is expected through at least Friday — where excessive heat warnings and heat advisories are issued.”

Utility Southern California Gas Co. (SoCalGas) was forecasting total system demand of around 2.6 million Dth/d for Friday, down from estimated demand of roughly 2.8 million Dth/d Thursday. With total receipts capped at just under 2.6 million Dth/d amid ongoing pipeline constraints, the utility was anticipating a storage withdrawal of nearly 200,000 Dth for Thursday.

Meanwhile, SoCalGas and San Diego Gas & Electric Co. notified shippers that a system-wide curtailment watch issued earlier in the week was ended as of Thursday morning.

Intercontinental Exchange (ICE) next-day indices showed power prices falling off sharply for Friday and Saturday delivery, with Palo Verde Peak down more than $127/MWh d/d to just under $100/MWh, while SP15 prices in Southern California were down nearly $117/MWh to around $107/MWh. Next-day power indices at these hubs traded above $300/MWh on Monday when SoCal Citygate spiked to nearly $40/MMBtu, according to ICE.

Genscape Inc. analyst Joe Bernardi noted a new unplanned curtailment that began Wednesday and was expected to last through Thursday affecting about 100 MMcf/d of SoCalGas receipts from PG&E at the Wheeler Ridge interconnect.

Amid the recent heat-driven spike in the spot market, August bidweek traders have begun to price in some upside risk at the volatile SoCal Citygate. As of Day 2 of bidweek Thursday, fixed price trades at the Southern California point were averaging $9.59, more than double the $3.93 averaged during July bidweek, NGI’s Bidweek Alert shows.

Meanwhile, SoCal Citygate August forward prices have increased by a whopping $2.44 over the past week, according to NGI’s Forward Look. While the most dramatic increases along the SoCal Citygate forward curve were seen at the prompt month, which surged to $10.203 as of Wednesday, the rest of the strip also posted substantial gains, Forward Look data show.

In the Northeast, prices at Algonquin Citygate climbed 14 cents to $2.96 as Radiant Solutions was calling for modestly warmer temperatures in Boston Friday. The forecaster called for highs to climb from the low 80s Thursday into the upper 80s to close out the work week, with temperatures averaging about 6.5 degrees warmer than normal to add a few cooling degree days.

A mid-August start-up for Transco’s Atlantic Sunrise expansion “seems reasonable” based on insights gathered from a flyover of the project conducted last week, according to Genscape analysts Colette Breshears and Laura Munder.

Based on the flight photos, “well over 90%” of the Central Penn Line South “has been completed, with miles of right of way in the process of restoration and revegetation,” Breshears and Munder said. “Holding up the mechanical completion of the pipeline are several road, wetland and stream crossings, with at least one wetland still waiting for the initial welding (which is followed by ditching, lowering in, backfilling and hydrotesting).

“…Observations of the brownfield construction along Transco’s Leidy Line show a completely finished right of way — not even any concentrations of machines indicating recent heavy work,” the analysts said. “Large portions of this section are also in the process of revegetation, indicating it has been complete for a while now. The last section of the pipeline,” the Central Penn Line North, “appears to be fully completed, with the only machinery present around construction and staging yards, which are sparsely populated with supplies. Revegetation in areas is quite advanced.”