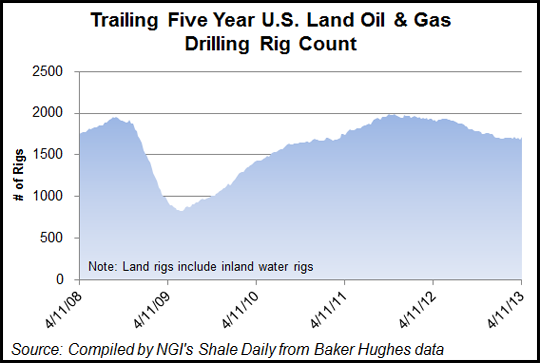 The first quarter earnings season for the energy sector kicks off on Friday with reports from Baker and Schlumberger, followed by Halliburton on Monday.

The most important question is, “What’s going to happen to U.S. onshore activity?”

Varying trajectories in publicly available rig counts from Baker, SmithBits and Rig Data, “weak actuals,” which are down 3-5% from the fourth quarter, as well as lackluster 1Q2013 results in interim reports “all point to rightful market speculation” on improving NAM margins/volumes than many analysts estimate for the rest of the year.

“The generally directionless U.S. land rig count doesn’t mean the same 1Q2013 progression for all players,” noted TPH. “We expect wide variability in results just like what occurred in 4Q2012,” when pressure pumping revenues were down from 3Q2012 by as much as 31% to up as much as 16%. This variability is being driven by customer/region-specific issues, contract rollovers, work-scheduling variances, etc., issues that are (and will continue to be) tough to calibrate quarter-to-quarter.”

Schlumberger, Baker and Halliburton will “set the oilfield service macro tone for the rest of oil service earnings season. We don’t expect any over-the-top bullish commentary,” but those providers should “reiterate their anticipation of margin expansion (for them) through this summer.”

High on the list of topics for land drillers and well servicing companies is the outlook for currently idle high-quality rigs to get back to work. TPH analysts don’t think it will happen in the next few weeks “particularly given the recent pullback in West Texas Intermediate oil price to the sub-$90/bbl level, so we’re bracing for further flattish/choppy U.S. land rig count activity this spring.”

Analysts said that Helmerich & Payne executives recently noted that competitors were “pricing aggressively to regain market share,” which “shouldn’t have been surprising, but it certainly garnered market’s attention…”

In the second half of the year, engineering and contracting (E&C) investors’ attention should focus on U.S. “petrochemical renaissance timing,” along with the global liquefied natural gas (LNG) project outlook in North America and East Africa, as well as increasing U.S. refining projects, said the TPH analysts.

“We believe the group can move back toward historical multiples as North American petchem, LNG and refining projects begin to hit backlog and U.S. investors become more comfortable that those large projects actually materialize.”