With a long-term strategy less tied to commodity prices than global energy demand, ExxonMobil is keying its 2020 plans to a string of opportunities in the Permian Basin, deepwater Guyana discoveries and two big natural gas export projects overseas. 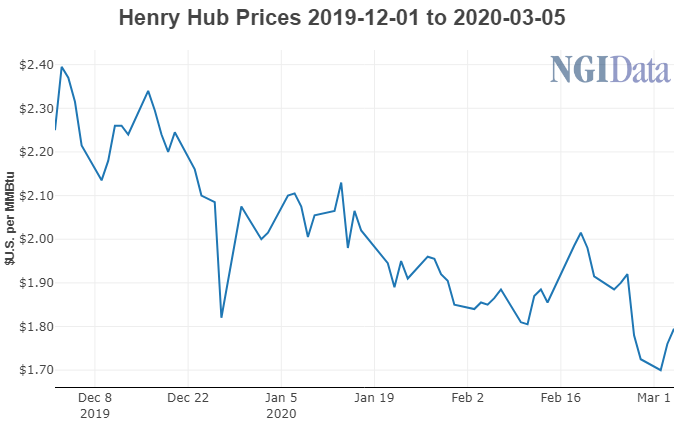 CEO Darren Woods on Thursday was joined by members of the management committee at the New York Stock Exchange (NYSE) for the annual analyst meeting. The event coincided with the 100th anniversary of the NYSE listing by an ExxonMobil predecessor company.

The anniversary offered “important context for viewing the current challenges that we see in today’s market,” Woods said. “Today, oversupply is driven by industry investments in some of these growth markets that have exceeded demand. And we have a very challenging short-term margin environment, which is now being compounded by the growing economic impact of the coronavirus that we’re seeing around the world. That is creating a lot of uncertainty, particularly in the near term, and I would say, particularly here on Wall Street.

The “longer-term horizon is clear,” Woods said. Demand for oil and natural gas has not abated, and as the world’s population grows, the need for fossil fuels will continue. With its deep pockets and organic opportunities, the Irving, TX-based operator is able to shift priorities while still improving cash flow.

PNG and Mozambique are not set to add to the bottom line before the mid-2020s, Hansen said, but government discussions continue.

In the shorter term, the slump in Henry Hub natural gas prices doesn’t justify increasing capital expenditures (capex) in the North American segment of the business, Chapman told the audience. The revamped strategy likely will reduce output from its key onshore projects in the Permian.

“We are adjusting our execution pace,” and spending because of the “current business environment,” Chapman said. The plan is to maintain a “strong pipeline of opportunities,” because “at its core, this is in an extraction-depletion business.”

To ensure it’s pulling the most from its facilities, management has reassessed where capex will be spent this year.

“I’ve said before not all volumes are equal. And with the price of Henry Hub at that low of a price, of course it makes sense to pull back capital in that segment of our business,” Chapman said. ExxonMobil has invested considerably in Permian natural gas infrastructure to ensure there is takeaway to the Gulf Coast for petrochemical projects, as well as exports.

“Our main focus on these assets continues to be on cost control and reliability,” Chapman said. “Each asset that we have in our upstream portfolio is charged to maintain or reduce unit operating expenses despite falling volumes.” ExxonMobil is now leveraging “new industry benchmarking data to further stretch our organization.”

“We are effectively executing our growth strategy that will lead to sustained improvement in shareholder value,” Woods said. “Using the strength of our balance sheet to invest through the cycle is a key element of our strategy.

“We are taking advantage of a favorable cost environment and investing in advantaged projects — underpinned by the long-term fundamentals of growing demand. The strength of our portfolio and our financial capacity enable us to continuously evaluate our priorities and the pace of investments while preserving value, which is critical in current market conditions and near decade-low commodity prices and margins.”

Capex is set at $30-35 billion annually through 2025, consistent with previous guidance. For 2020, the company plans to invest up to $33 billion, “depending on the progress of individual projects.”

In the Permian, the outlook for production volumes overall is higher, and the company remains on track to exceed 1 million boe/d by 2024. A “capital-efficient” development approach is to be applied at scale in the Permian, Hansen said, using cube development, which assesses multiple shale/tight layers simultaneously. Cube development reduces capex and the surface footprint, he noted.

ExxonMobil also is “evaluating the pace” of near-term development activities in the Permian “in response to market conditions…” Permian well cost and performance has improved, supported by integrated capacity expansions at refineries and petrochemical operations in Texas and Louisiana.

Guyana, where estimated gross recoverable resource from the Stabroek Block has increased to more than 8 billion boe, will continue to be a top development this year. ExxonMobil and its partners started oil production at the Liza field in December, with production in Guyana expected to reach more than 750,000 b/d gross by 2025.

The company is upgrading its portfolio, progressing its longer term $15 billion divestment program. The long-term growth plans “are rooted in efforts to meet the world’s increasing demand for reliable and affordable energy, while reducing emissions and risks associated with climate change,” Woods said.

Population growth and an expanding middle class will increase energy demand, which will require massive investments in oil and natural gas even in the more stringent low carbon scenarios, he said.

Investments in technologies to reduce emissions also are necessary, he said. The company is targeting commercial transportation, power generation and high-energy industrial processes, because they produce 80% of energy-related emissions. Current technologies are insufficient to achieve deep reductions, said the CEO.

“ExxonMobil is committed to being part of the solution,” said Woods. “We’re investing in new energy supplies to improve global living standards, working on technologies that are needed to reduce emissions and supporting sensible policies, such as those putting a price on carbon or regulations to reduce emissions of methane.”