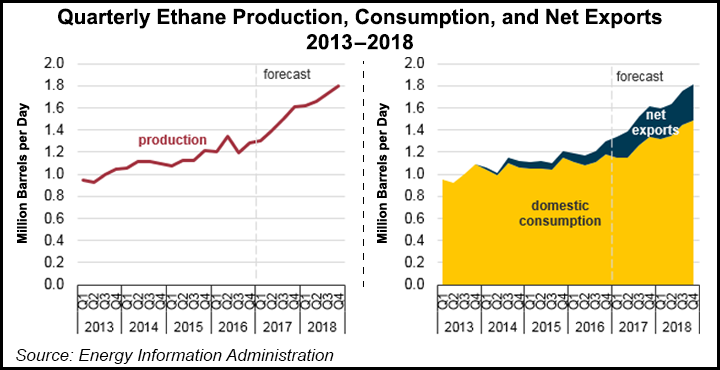 “With the completion of the project in Baytown, we are on the verge of fully realizing one of ExxonMobil’s most significant U.S. Gulf Coast investments,” said ExxonMobil Chemical President John Verity. “Our new ethane cracker will allow us to economically meet rapidly growing demand for high-performance polyethylene products around the world while continuing to sustain economic development and create jobs for decades to come.”

The project has created an estimated 10,000-plus construction jobs and 4,000 related jobs in the Houston area since construction began in 2014. Once operational, the facility is expected to support 350 permanent jobs, $870 million/year in regional economic activity and $90 million/year in local tax revenues.

The Baytown chemical expansion project is a key component of ExxonMobil’s Growing the Gulf initiative, in which it is planning close to a dozen new or expanded projects.

In addition to the Baytown cracker, ExxonMobil and joint partner Saudi Basic Industries Corp. have proposed a petrochemical complex near Corpus Christi, TX, to include the largest capacity cracker in the world, a 1.8 million ton/year facility. A final investment decision has not been made.

Most of ExxonMobil’s planned chemical capacity investment in the Gulf Coast region is focused on supplying export markets, including Asia, with high-demand products, which should contribute to strengthening the U.S. balance of trade.

Recent changes in the U.S. corporate tax rate “also create an environment for increased future capital investments in projects such as these, and will further enhance the company’s competitiveness in global markets,” executives said.

“The U.S. chemical industry is rapidly expanding along the Gulf Coast due to abundant supplies of domestically produced natural gas, as demonstrated by the investments ExxonMobil alone is making,” Verity said. “This expansion will not only increase the nation’s existing manufacturing and export capacity, but also further stimulate economic growth and create thousands of full-time jobs.”

ExxonMobil in the past five years has contributed $2 million to the Community College Petrochemical Initiative, a training program offered by nine Houston-area community colleges to provide technical skills to high school graduates, returning military veterans and others.