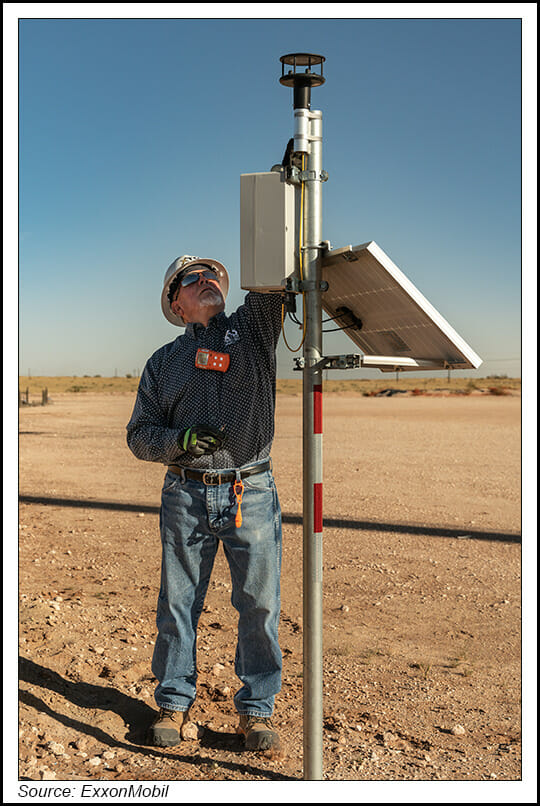 The Irving, TX-based supermajor was producing 500,000 boe/d in the Permian at the end of the third quarter, accounting for more than 40% of the company’s U.S. net production.

“The company plans to electrify its operations with low-carbon power, which may include wind, solar, hydrogen, natural gas with carbon capture and storage, or other emerging technologies,” the firm said. “ExxonMobil plans to expand its methane detection programs utilizing satellite surveillance and a network of ground-based sensors for continuous monitoring, and aerial flyovers that identify leaks for rapid repairs.”

By the end of this year, ExxonMobil plans to reduce flaring volumes across its Permian operations by more than 75% versus 2019, and to eliminate all routine flaring in the basin by the end of 2022. “The company is also securing alternative natural gas delivery points across the basin to minimize non-routine flaring,” management said.

The net zero goal for Scope 1 and 2 emissions “is one of the most ambitious and wide-reaching in the Permian Basin,” said ExxonMobil’s Bart Cahir, senior vice president of unconventional. “Throughout the value chain, our people are working hard to help reduce the greenhouse gas emissions associated with the products that enable modern life.”

According to management, ExxonMobil is on track to exceed its 2025 greenhouse gas emission-reduction plans announced in December 2020.

Those plans were unveiled a week after activist shareholders called for an overhaul of the company’s strategic goals with a focus on climate.

ExxonMobil said its Permian plans are aligned with the Global Methane Pledge spearheaded by the Biden administration and the European Union.

The company added that, “To validate its emissions-reduction efforts, ExxonMobil is working with an independent validator, non-profit MIQ through a pilot program initially focused on Poker Lake facilities in New Mexico.

“Through the program, natural gas will be certified based on a series of factors including methane intensity and will be marketed to customers early next year.”

The certification process could be expanded to other production areas based on demand, management said.

Achieving the climate targets “will require the support of well-designed policies and advances in technology that increase availability and reliability of carbon-neutral power in the region, including wind and solar,” ExxonMobil said. “Through long-term purchase contracts, the company supports the development of wind and solar power generation.”

The supermajor plans to hold annual capex steady in a range of $20-25 billion for the six-year period, while bumping up expenditures for carbon-reduction projects.