Natural gas will continue to gain market share through 2040, as anticipated, and with a big assist from renewable/low carbon fuels, will help reduce by half the carbon intensity over that period, ExxonMobil Corp. said Monday in its annual energy forecast. 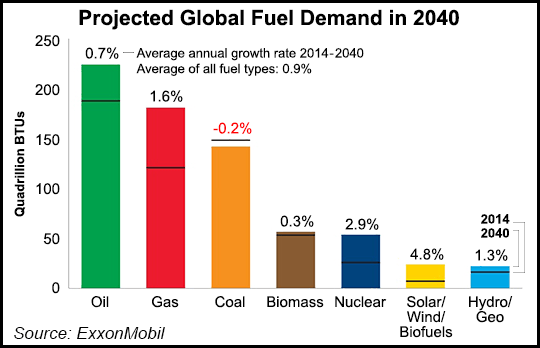 The trend for gas share moving higher has been forecast by ExxonMobil and its peers for several years, boosted by the expansion of unconventional resources in North America. The upward trajectory for gas demand and supply remains strong, the oil major said in the 2016 edition of The Outlook for Energy.

Between 2014 and 2040, gas is expected to meet about 40% of growth in global energy demand, with consumption up by half to 2040. Oil still is expected to be the leading fuel, while coal continues to lose market share. Meanwhile, nuclear and renewables likely will account for nearly 40% of the growth in global energy demand, and by 2040, they should make up nearly 25% of supply, with nuclear alone representing about one-third.

“ExxonMobil’s analysis and those of independent agencies confirms our longstanding view that all viable energy sources will be needed to meet increasing demand,” said CEO Rex W. Tillerson. The annual forecast is used “to help understand future energy supply and demand, which can aid decisions by individuals, businesses and governments that together will affect the future of energy.”

The annual forecast, developed by ExxonMobil’s economists, engineers and scientists through data-driven analysis, examines energy supply and demand trends for about 100 countries, 15 demand sectors and 20 different energy types. The anticipated outlook is followed around the world, similar to annual forecasts issued by BP plc, among others, as well as global energy agencies and government experts (see Daily GPI, Nov. 10, 2015; Nov. 3, 2015).

“We expect oil to remain the world’s largest energy source, essential to transportation and as a feedstock for the petrochemicals industry,” economists said. Global demand for oil and other liquids is projected to rise by about 20% from 2014 to 2040. Coal, currently the world’s second-largest fuel, is expected to see global demand peak around 2025 and then begin to decline, led by the industrial and power generation sectors, as businesses improve energy efficiency and switch to fuels with lower carbon emissions.

North America will not only be exporting natural gas worldwide, but it may emerge as an oil exporter.

“Through 2040, there are likely to be significant shifts in the global trade balance,” the forecast said. “One of the biggest will be seen in North America, where liquids production is projected to climb by almost 40% through 2040 on growth in tight oil, oilsands and natural gas liquids (NGL). North America, which for decades had been an oil importer, is on pace to become a net exporter around 2020. The United States should have the capacity to become a net liquids exporter around 2025.”

Conventional oil deposits continue to account for most of the world’s production, but “we expect most of the growth through 2040 to come from technology-driven supplies including tight oil, NGLs, oilsands and deepwater production. These supplies are projected to represent 40% of global liquid production by 2040, up from 25% in 2014.”

Significant growth is seen from tight oil, particularly from North America, with shale and tight rock formations expected to account for about 10% of world liquids production through the forecast period.

“Most of this oil will come from North America, the birthplace of the tight oil industry,” the outlook noted. “Around 2010, U.S. producers took the same techniques that had unlocked shale gas — horizontal drilling and hydraulic fracturing — and applied them to tight oil, with tremendous success. In fact, U.S. crude output has risen by about 75% since 2010.” Tight oil “is now an established, globally competitive source of liquid supply. Unlike some conventional or more complex projects, tight oil production also can adjust relatively quickly to changes in demand.”

As well, NGLs, also mostly from North America, are expected to account for almost 15% of global liquids supply by 2040 from 10% two years ago. Deepwater production is seen increasing by around 70%, with the U.S. Gulf of Mexico a key supply area.

The annual outlook is projecting:

“Our forecast is used as a foundation for the company’s business strategies and to help guide multi-billion dollar investment decisions,” said ExxonMobil’s William Colton, vice president of Corporate Strategic Planning, which develops the outlook. “For many years the outlook has taken into account policies established to reduce energy-related carbon dioxide emissions.” The Conference of Parties (COP 21) accord reached in December “set many new goals, and while many related policies are still emerging, the outlook continues to anticipate that such policies will increase the cost of carbon dioxide emissions over time” (see Daily GPI,Dec. 14, 2015).