ExxonMobil is shutting in 100,000 boe/d in the Permian Basin and dropping the rig count to 15, down 75%, but some oil and natural gas demand appears to be gradually increasing worldwide, a sign that Covid-19 may not suppress consumption for too long. 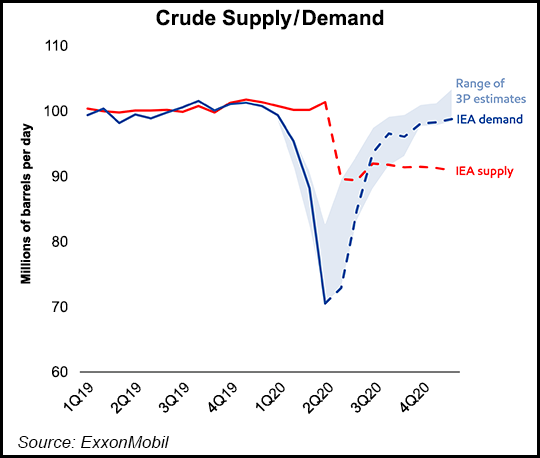 CEO Darren Woods offered a bit of optimism during a conference call on Friday to discuss first quarter results and lay out near-term plans. The outlook for the supermajor remains fuzzy, but the coronavirus pandemic is not going to last forever, he said.
Admittedly, “we’ve never seen anything of what the world is experiencing today,” Woods told investors. “While we manage through these challenging times, we are not losing sight of the long-term fundamentals that drive our business. Economic activity will return, and populations and standards of living will increase, which will in turn drive demand for our products and a recovery of the industry…”

Still, the unprecedented decline in demand has led to “uncertainty on the timing of the recovery. We’re planning for a slow one,” as companies gradually return to work and people’s confidence improves, leading to an increase in fuel consumption.

“We expect it to be in the higher end of the range,” Woods said. The announced production cuts by the Organization of the Petroleum Exporting Countries and its allies “are insufficient to offset the loss in demand…”

With rising global inventories and low market prices, an “increasing number of shut-ins” is anticipated before supply and demand are back into balance, possibly later this year, Woods said.

“Industry shut-ins could make that happen faster than projected, depending on supply and demand…We don’t expect to see a market response until inventories are worked down…It’s going to be a challenging summer and sloppy second half of the year.”

There are glimmers of demand growth in Asia, particularly in China, where Covid-19 initially was detected.
“We hope we’re surprised with a quick recovery,” and “cautiously optimistic,” given signs that China has begun to recover. Demand is “slightly above the same period last year…It’s too early to tell if the initial rebound will be sustained or even relevant to other recoveries around the world. Nonetheless, we find that somewhat encouraging…

“Economies will recover. However, in the short term, we are compensating for a significant loss in demand.”

The Irving, TX-based supermajor in early April reduced capital expenditures by 30% to $23 billion from $33 billion. Operating expenses for the year were cut by 15%.

Given the challenging market conditions, global production overall is coming down from “economic shut-ins and market-related curtailments,” Woods said. At this time, the estimated impact to 2Q2020 is reduction of around 400,000 boe/d.

Also in the upstream, natural gas production is forecast to be lower because of seasonal demand, with an expected impact of 100,000 boe/d.

In addition, ExxonMobil is reducing “small capital projects at most of our sites,” and it is “pushing out” liquefied natural gas export plans for one of two Mozambique projects, said the CEO.

Last month he indicated the Permian would take the biggest hit to spending because it is considered a short-cycle development where capital can more easily be ramped up or down. Permian production in 1Q2020 totaled more than 350,000 boe/d, up 56% year/year or 126,000 boe/d.

“Over the course of the year, we expect to ramp rigs down by about 75% in the Permian and end the year at approximately 15 rigs,” Woods said. “Our remaining development activity will be focused on Poker Lake,” which is in the Permian Delaware sub-basin.

“Since most of 2020 production is locked in with the work already completed, reduction in capital spend will primarily affect 2021, when we expect volumes will be down 100,000-150,000 boe/d from our previous estimates,” he said.

The impact of reduced spending in the Permian this year should reduce output by around 15,000 boe/d. “A much larger production impact will be associated with shut-ins,” estimated at “roughly 100,000 boe/d. The duration of these shut-ins will obviously depend on the evolving price environment.”

Wells to be shuttered are mostly in early stages, i.e. those with higher production rates.

“Depending on how the market evolves, we have the flexibility to bring more wells back on and ramp up in the unconventional space,” Woods said. “The short-cycle gives us a lot of flexibility and a lot of value too…We feel very good about the ability of that resource when it is online to compete in a low price environment. The challenge today is to get to that position…”

ExxonMobil posted a 1Q2020 loss of $610 million (minus 14 cents/share), driven by a one-time $2.9 billion impairment from market-related writedowns because of low oil and gas prices. In 1Q2019, net profits totaled $2.35 billion (55 cents). Earnings from oil and gas production fell 91% year/year.

To minimize risks presented by Covid-19 and maintain operations, ExxonMobil has implemented enhanced cleaning procedures and modified work practices at sites around the world. The company also is maximizing production of isopropyl alcohol to manufacture hand sanitizer, and polypropylene to make protective masks, gowns and wipes.

Manufacturing operations in Louisiana also were reconfigured to produce medical-grade hand sanitizer. Community relief efforts were stepped up around the world to support food banks and provide fuel, meals, and masks for healthcare workers and first responders. In addition, ExxonMobil is supporting efforts to redesign and accelerate reusable face mask and shield production.