As anticipated, ExxonMobil Corp. and its Saudi Arabian partner agreed Wednesday to develop a world-class ethane steam cracker on the Texas Gulf Coast near Corpus Christi, a facility that if given final approval would be able to produce 1.8 million metric tons/year (mmty) of ethylene. 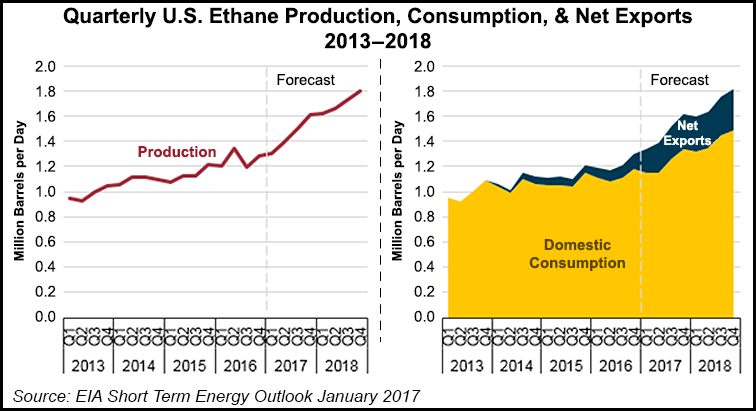 The proposed project, jointly owned by Saudi Basic Industries Corp., aka SABIC, is to be sited in San Patricio County in South Texas, feeding a monoethylene glycol unit and two polyethylene units. The cracker, which as planned may be the largest in the world, is one of 11 projects ExxonMobil has announced as part of its 10-year, $20 billion Growing the Gulf initiative.

“This decision represents a significant milestone for both the local community and the state of Texas,” said ExxonMobil Chemical Co. President Neil Chapman. “We wish to thank local and state officials who have been instrumental in the site selection process, as well as everyone in the community who attended meetings to learn more about the project and provided us with constructive feedback. We will continue listening to local residents and businesses and look forward to continuing to work together.”

Following months of at times contentious debate and public protests, leaders in the rural Coastal Bend county last month said they would welcome the steam cracker. The Gregory-Portland Independent School District Board voted 6-0 to provide tax abatements to the project for more than 15 years, which followed a tax break agreed to by the San Patricio County Commission.

ExxonMobil Chemical is one of the largest petrochemical companies worldwide, with more than 90% of its chemical capacity integrated with large refineries or natural gas processing plants.

With the site selection completed, the partners now plan to apply for the necessary air and wastewater permits from the Texas Commission on Environmental Quality. Each company would make a final investment decision about the facility once the required permits have been granted.

SABIC, which operates in more than 50 countries, ranks among the world’s top petrochemical companies, and is a market leader in producing polyethylene, polypropylene, advanced thermoplastics, glycols, methanol and fertilizers.

Texas Gov. Greg Abbott said with ExxonMobil and SABIC’s decision to pursue permits for the proposed facility, the state “has shown the business world that our state is the place where innovation and ingenuity thrive. This decision by SABIC and ExxonMobil is a tremendous win for not just San Patricio County, but for the entire state of Texas. This record-breaking project illustrates that our business climate is exactly what leading and growing companies are seeking when investing in their future.”

The announcement “is a shining example of how abundant natural gas — made possible by the shale revolution — is helping Texas to reclaim its standing as a manufacturing powerhouse,” said Todd Staples, president of the Texas Oil & Gas Association. He congratulated leaders in San Patricio “for helping to keep Texas competitive and landing these great jobs and local investment.”

The ethane cracker, if built, would join a bevy of South Texas infrastructure projects in San Patricio and adjacent Nueces County — greenfields and expansions — centered around a surfeit of U.S. natural gas and oil output, particularly from the Permian Basin and Eagle Ford Shale.

The Port of Corpus Christi, the nation’s sixth largest, is in the process of extending and deepening the La Quinta Ship Channel to make way for more trade, including liquefied natural gas (LNG) exports, expanded petrochemical deliveries and continuing support for an already extensive Gulf of Mexico oil and gas business.

One of the biggest projects underway is by Corpus Christi Liquefaction LLC, a subsidiary of Cheniere Energy, which is developing an estimated $13 billion LNG export terminal with production capacity of up to 13.5 mmty. Trains 1 and 2 are underway, and the third train is permitted.

Among the many pipelines scheduled to terminate around Corpus Christi, which is in Nueces County, is NAmerico Energy Holdings LLC’s newly formed Pecos Trail Pipeline Co., a 468-mile intrastate gas system originating in the Permian. As well, DCP Midstream LP and a unit of Kinder Morgan Inc. are building the Gulf Coast Express Pipeline Project to carry gas from the Permian to Agua Dulce, which is near Corpus in Nueces County.

In addition, Buckeye Partners LP earlier this month said it would hold a binding open season in 3Q2017 for the proposed South Texas Gateway, an oil pipeline that would carry Permian crude to Corpus for refining and export. As well, Epic Pipeline Co. LLC in March began offering capacity for a proposed crude/condensate pipeline that would run from the Permian to Corpus.