ExxonMobil is backing off ambitious goals to increase spending and is slicing the book value of some of its assets, particularly the U.S. dry natural gas portfolio, by up to $20 billion. 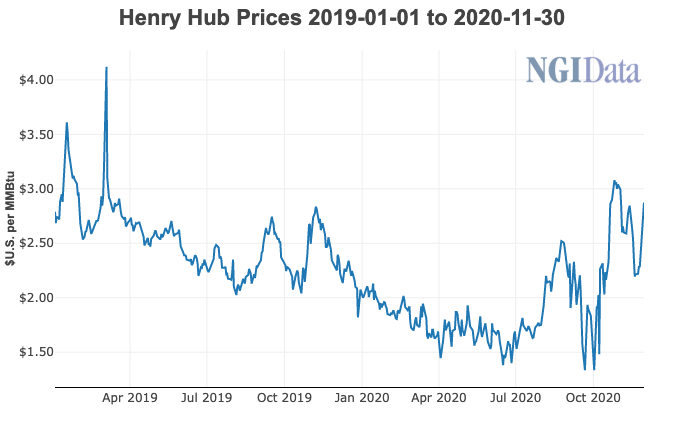 Following an annual strategic review by the board in late November, the Irving, TX-based energy giant on Monday said it has revised its capital spending outlook and production forecast to 2025.

“As part of the planning process, the company assessed its full portfolio to prioritize assets with the highest future value potential within its broad range of available opportunities in order to optimize resources within current levels of debt and operating cash flow, as well as identify potential asset divestment candidates,” ExxonMobil stated in a Securities and Exchange Commission filing.

“This effort included a re-assessment of dry gas assets, primarily in North America, which previously had been included in the company’s future development plans.”

ExxonMobil in late October had warned the North American assets were facing a writedown of $25-30 billion and could be for sale.

Under the board’s revised plan, ExxonMobil “no longer plans to develop a significant portion of its dry gas portfolio, including a portion of the company’s resources in the Appalachian, Rocky Mountains, Oklahoma, Texas, Louisiana and Arkansas regions of the U.S., as well as resources in Western Canada and Argentina.”

ExxonMobil instead plans to prioritize “near-term capital spending on advantaged assets with the highest potential future value, including developments in Guyana and the U.S. Permian Basin, targeted exploration in Brazil, and chemicals projects to grow high-value performance products.”

There is to be an “increased focus” to monetize the “less strategic assets to grow the portfolio of potential divestments, including certain North American dry gas assets, contingent on buyer valuations.”

A lot of the Lower 48 gas-rich portfolio was acquired in 2010, when ExxonMobil slapped down $43 billion to buy XTO Energy Inc. When the deal was announced, Henry Hub was trading above $5.00/MMBtu; when it was completed in June 2010, gas prices were averaging $4.80/MMBtu.

Impairing the gas assets is expected to result in a one-time charge to 4Q2020 results of $17-20 billion after taxes. No material future cash expenditures are forecast related to the impairments. ExxonMobil also took a $2 billion writedown on the value of the U.S. gas assets for 4Q2016.

Since taking over in 2016 from Rex Tillerson, CEO Darren Woods has pushed to expand spending and production plans. Enthusiasm for the Permian, the company’s No. 1 Lower 48 play, has not wavered, but oil and gas prices have proved fickle. Then along came Covid-19, which upended the entire energy complex, as consumption faltered and the energy transition accelerated.

In October ExxonMobil said it would reduce U.S. staffing levels by about 1,900 through “voluntary and involuntary programs” primarily at the management offices in Houston.” The supermajor employs about 70,000 people worldwide, including an estimated 16,000 people in the Houston area.

On Monday ExxonMobil also said it would lay off by the end of 2021 around 300 people across the Canadian affiliates Imperial Oil Ltd., ExxonMobil Canada Ltd. and ExxonMobil Business Centre Canada ULC.

“The workforce reductions result from insight gained through reorganizations and work-process changes made over the past several years,” management said of the Canadian staff cuts. “The impact of Covid-19 on the demand for ExxonMobil’s products has increased the urgency of the efficiency work.

“Canada remains an important market for ExxonMobil; however, further actions are needed at this time to improve costs and ensure the corporation and its affiliates manage through these unprecedented market conditions.”

“Continued emphasis on high-grading the asset base — through exploration, divestment and prioritization of advantaged development opportunities — will improve earnings power and cash generation, and rebuild balance sheet capacity to manage future commodity price cycles while working to maintain a reliable dividend.”

Priorities going forward include leveraging cost savings realized in 2020 “that are on track to exceed announced reductions of $10 billion, or 30% of capital spending and 15% of cash operating expenses.

“Key to ongoing expense management are business line reorganizations and efficiencies that include global workforce reduction of 15% by year-end 2021.”

The focus is on preserving “the long-term value of the company’s investment portfolio by offsetting costs associated with project delays.” The company still expects to double earnings by 2027.

The business environment during the fourth quarter has shown signs of improvement, “despite the resurgence in Covid-19 cases and accompanying economic restrictions,” Woods said.

“Prices and margins for many of our businesses have improved from the third quarter and when coupled with continuing efforts to reduce spending and capture additional efficiencies, quarter-to-date cash flow has improved versus our plan assumptions,” he said.

ExxonMobil is far from alone in writing down the value of its portfolio. BP plc and Royal Dutch Shell plc each took massive impairments for 2Q2020. Equinor SA in 3Q2020 impaired $1.38 billion in the U.S. segment.