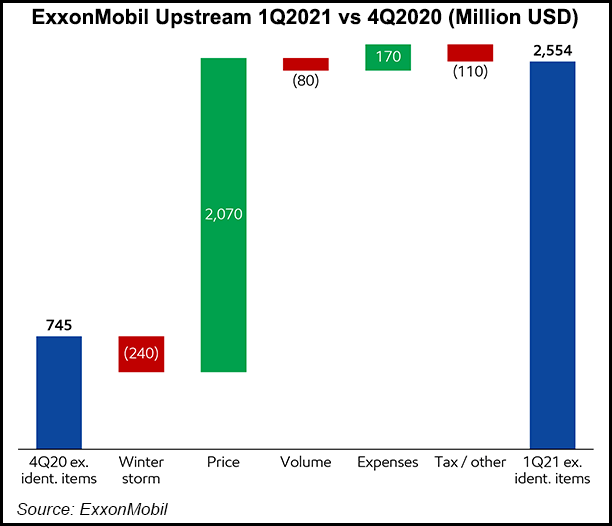 On the pricing front, natural gas realizations improved by 33% in the quarter, with average oil prices up 42%.

“We made a lot of progress over the course of a challenging year,” CEO Darren Woods said during the quarterly conference call Friday. “The positive results…reflect not only last year’s work, but the work we started years ago, work that has positioned us to take advantage of market improvements.”

The “successful response to the unprecedented challenges of 2020 has its roots in two critical initiatives started years earlier,” he told investors. “The first was our focus on developing an industry-leading portfolio of advantaged Investments to recapitalize our businesses and increase capacity to generate earnings and cash.

“Prioritized investments in these opportunities last year are paying dividends this year and will continue to well into the future.”

Another initiative completed in 2019 involved restructuring the businesses, which today is providing “a clear line of sight to the market, increased ownership for earnings at all levels and improving the speed and quality of decision making across the corporation. Importantly, it helped our people better relate their work to our bottom-line results.”

Because of the structural changes, “we’ve permanently reduced operating expenses, capturing $3 billion in 2020 versus 2019 with further efficiencies in the first quarter and more expected through the year. In total, we expect to achieve $6 billion of annual savings by 2023 versus 2019.”

ExxonMobil’s portfolio opportunities, he said, are “the best we’ve seen in 20 years. Ninety percent of our upstream investments are in resource additions over the next five years.”
The prospects are led by the Permian Basin, as well as a plethora of offshore discoveries in Guyana, which are now at 19, and in Brazil.

In addition, a massive ethane cracker and chemical complex in South Texas near Corpus Christi “is ahead of schedule, with the projected start up in the fourth quarter.” ExxonMobil is building the 1.8 million metric ton/year facility in a joint venture with Saudi Basic Industries Corp.; it initially was set for completion in 2022.

“We expect to complete the project for about 25% less than the average cost of a Gulf Coast steam cracker,” Woods said. “This facility is a key development in our plan to grow sales of high-value, performance products by 60% through 2027.”

Total production jumped 3% sequentially to 3.8 million boe/d. Upstream volumes in 1Q2021 increased by an average of 100,000 boe/d from 4Q2020. Natural gas volumes were 12% higher, mainly from seasonal demand in Europe and lower scheduled maintenance. Liquids volumes were down 3% from winter storm impacts and higher maintenance.

Like its oil and gas peers that already have reported quarterly results, ExxonMobil took a hit to the bottom line from Winter Storm Uri, which knocked out power across Texas during February.

The energy transition strategy continued to figure in the quarter, with the launch of the ExxonMobil Low Carbon Solutions business. The work initially is centered on large-scale carbon capture and storage (CCS) concepts. They include evaluating and advancing 20 opportunities, “such as a multi-industry hub to reduce emissions from hard-to-decarbonize industries near the Houston Ship Channel.

“As the global leader in carbon capture, we are seeing growing public and private sector support for CCS as a critical enabling technology to reduce emissions and help meet society’s net-zero ambitions,” Woods said.

The Irving, TX-based energy major said its cogeneration facilities generated 400 MW to power around 200,000 of its neighbors’ homes during the ice storm.

The severe weather event reduced first quarter earnings by nearly $600 million across all businesses “from decreased production and lower sales volumes, repair costs, and the net impact of energy purchases and sales.” All of the affected facilities have since resumed normal operations.

In the downstream, margins improved from the fourth quarter. However, they remained below 10-year lows because of “market oversupply and high product inventory levels,” the company reported.

Within the chemicals business, ExxonMobil is pursuing three advanced recycling initiatives in Europe and the United States to advance its commitment “to sustainability and capture value from plastic waste at scale.” Among the initiatives, it plans to begin marketing certified circular plastics products later this year.

This year capital spending remains set at $16-19 billion. If market conditions were to improve, the additional cash is set to be used to reduce debt.