ExxonMobil Corp. and Chevron Corp., the largest natural gas and oil producers in the United States, posted their worst quarterly performances in years following the extended decline in commodity prices, signaling what is looking like a prolonged downturn across the sector. 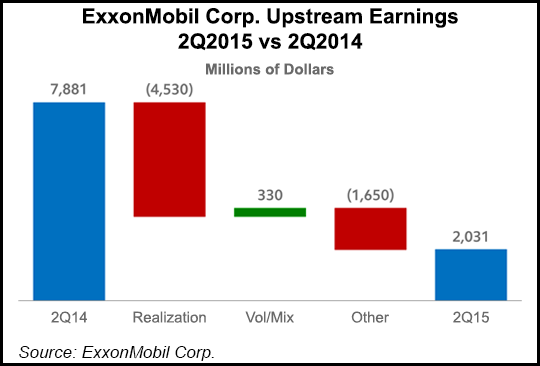 ExxonMobil is scaling back its share buybacks, while Chevron has lowered its internal long-term price for crude oil. Both operators indicated that final investment decisions on major projects are being reconfigured, with some deferred and others possibly canceled. Both companies’ share prices slumped by as much as 5% in midday trading on Friday.

ExxonMobil’s capital expenditures (capex) fell sharply from a year ago, down 16% to $8.26 billion. Net cash year/year declined to $8.8 billion from $10.2 billion, and operational cash flow slumped to $9.4 billion from $12.8 billion.

Production rose 3.6% worldwide to 5 million boe/d, with liquids volumes rising almost 12% to 2.3 million b/d, benefiting from new developments in the United States, Canada and overseas. However, natural gas output from 2Q2014 fell by 5.8% to 10.1 Bcf/d, down 622 MMcf/d, which the operator blamed on regulatory restrictions in the Netherlands.

For Chevron, it was a bloodbath, with second quarter profits plummeting to $571 million (30 cents/share), versus $5.7 billion ($2.98) in 2Q2014. Included in the latest report were impairments totaling $1.96 billion and other charges of $670 million relating to project suspensions and adverse tax effects. Part of the charges, said CFO Pat Yarrington during a Friday conference call, stem from a downward revision to the longer-term crude price outlook. She declined to tell investors what the revised price outlook is.

He said “multiple efforts” are ongoing to improve future earnings and cash flows.

“We’re getting our cost structure down through renegotiations across the supply chain and by sizing our contractor and employee workforce to reflect lower activity levels going forward. We’re actively managing to a smaller capital program, as projects currently under construction come online and as potential new projects are paced and re-bid. In addition, our four-year divestment program is ahead of pace.”

Top priorities are completing the Gorgon and Wheatstone liquefied natural gas export projects in Australia. “Incremental production and cash generation from these projects and others, along with a curtailed capital program, should provide support for continuing competitive shareholder distributions.”

Despite the impairments from price realizations, U.S. production was 9% higher than a year ago at 730,000 boe/d following project ramp-ups in the Gulf of Mexico, the Permian Basin and the Marcellus Shale, partially offset by normal field declines.The net liquids component production increased 11% to 511,000 b/d, while net natural gas production increased 5% to 1.31 Bcf/d.

In the U.S. onshore, the operator is on track to drill 325 wells (gross) this year, including “multiple horizontal well development programs” in the Permian’s Midland and Delaware subbasins, said upstream chief Jay Johnson.

Analysts were not impressed.

“Second quarter earnings were lower than expected for both companies, a disappointment for Exxon and a disaster for Chevron,” said Oppenheimer & Co. analyst Fadel Gheit. “A rising tide lifts all ships, but when the tide goes out, all ships go down.”

Wolfe Research LLC analyst Paul Sankey said the reports by the Big Oil companies to date indicates “this is the beginning, not the end, of the writedown process.” The biggest concern is weaker oil and gas demand through the rest of this year. The writedowns “will get worse” for the industry because the “market still looks very oversupplied with oil, and we’re in peak demand season globally.”