ExxonMobil Corp. on Tuesday announced it would triple Permian Basin production to more than 600,000 boe/d by 2025, with tight oil output from the Delaware and Midland sub-basins alone increasing five-fold. 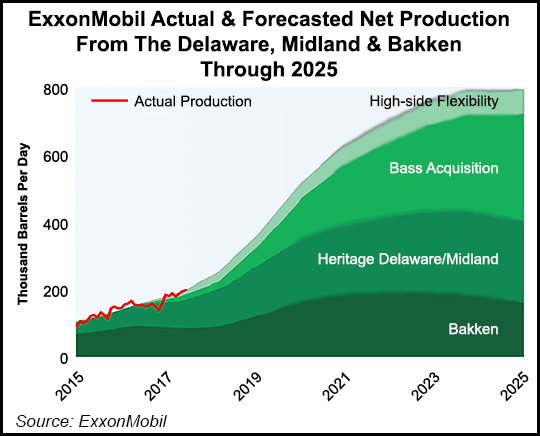 The announcement followed a blog posting on Monday by CEO Darren Woods, who credited the recent U.S. tax reform as key to boosting domestic investments by more than $50 billion over the next five years. The $50 billion investment includes $20 billion-plus earmarked last year to expand Gulf Coast petrochemical projects.

Citing the U.S. corporate tax reform legislation enacted in late 2017, Woods said there now is “an environment for increased future capital investments,” which are to include more than $2 billion for transportation infrastructure to support the Permian operations.

Several companies have announced plans to invest “here at home,” Woods said, “partly as a result of tax reform, which among other things reduced one of the highest corporate tax rates in the developed world. These positive developments will mean more jobs and economic expansion across the United States in a myriad of industries.

“And it will complement the substantial capital spending in the United States that ExxonMobil has teed up in the coming years.”

Increasing output from the Permian holdings, a massive acreage position spread across West Texas and southeastern New Mexico, is to be driven by reduced drilling costs, technology improvements and “expanded acreage,” said management.

ExxonMobil today is one of the most active operators in the ancient basin, where it has drilled more than 5,000 horizontal wells to date.

To boost its growth, the Permian horizontal rig count is now set to increase “a further 65% over the next several years,” said management. Since early 2014 the Irving, TX-based producer has doubled footage drilled/day on horizontal wells and reduced per-foot drilling costs by about 70%.

“Our geographic and competitive advantages in the Permian position the company for strong growth and long-term value creation,” said XTO Energy Inc. President Sara Ortwein, who runs ExxonMobil’s onshore-focused subsidiary. “We can deliver profitable production at a range of prices, and we have logistics and technology advantages over our competitors.”

“With this production growth, we are well positioned to maximize value as increased supply moves from the Permian to our Gulf Coast refineries and chemical facilities where higher-demand, higher-value products will be manufactured,” Ortwein said.

More Permian production is expected to prove valuable for ExxonMobil supply and feedstocks to Texas downstream and chemical operations in Baytown, Beaumont and Mont Belvieu, and to Baton Rouge, LA.

A recently acquired crude oil terminal in Wink, TX, is to handle Delaware resource near the Texas-New Mexico border, which would be transported to Gulf Coast refineries and marine export terminals.

Plans now are underway to expand the Wink infrastructure to move more production south from ExxonMobil and third parties from the Permian’s Delaware, Midland and Central Basin Platform.

ExxonMobil previously announced it would build and expand Gulf Coast manufacturing assets as part of its $20 billion Growing the Gulf initiative.

Gulf Coast projects planned by ExxonMobil include an ethane steam cracker at the integrated Baytown facility, which would provide ethylene feedstock for two new polyethylene units at the nearby Mont Belvieu facility. A new production unit at the polyethylene plant in Beaumont is set to increase capacity by 65%, while expansions at Baytown and Beaumont refineries are set to add more than 300,000 b/d of light crude processing capacity.

ExxonMobil and Saudi partner Saudi Basic Industries Corp. last year also agreed to develop a world-class ethane steam cracker on the Texas Gulf Coast near Corpus Christi, a facility that if given final approval would be able to produce 1.8 million metric tons/year of ethylene.

“The recent changes to the U.S. corporate tax rate coupled with smarter regulation create an environment for future capital investments and will further enhance ExxonMobil’s competitiveness around the world,” Woods said. “We’re actively evaluating the impact of the lower tax rate on the economics of several other projects currently in the planning stages to further expand our facilities along the Gulf Coast.” It’s “good to see sound policy laying the groundwork for America’s future economic success.”