ExxonMobil Corp.’s Permian Basin resources in New Mexico could generate $64 billion in net economic benefits for the state and local communities over the next four decades, creating thousands of jobs and providing increased funding for education, health and human services and infrastructure improvements, according to an economic consulting firm. 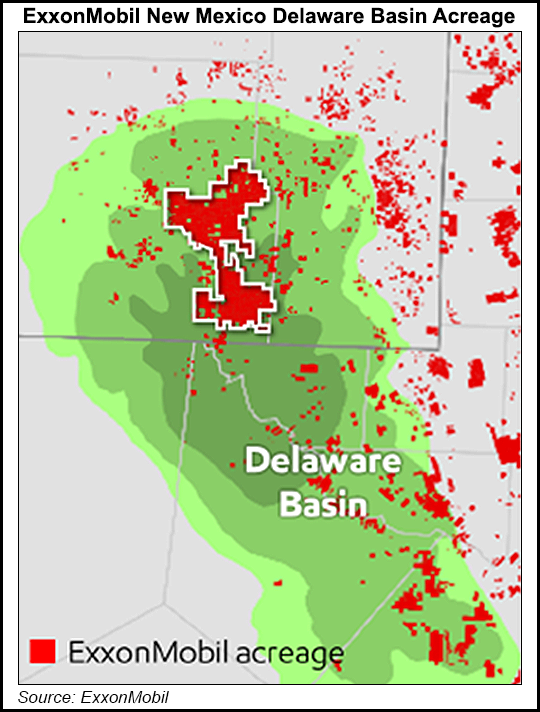 The supermajor in 2017 struck a deal to more than double its Permian resources, adding about 275,000 acres, mostly in New Mexico. ExxonMobil, which expects to produce more than 1 million boe/d from West Texas and New Mexico by as early as 2024, in April estimated the size of its resource base overall estimated at about 10 billion boe “and is likely to grow further” as development continues.

“The Permian Basin is the engine of America’s energy renaissance and New Mexico residents will see direct economic benefits and opportunities from our planned investments,” CEO Darren W. Woods said. “We will be a significant, long-term economic contributor to the state of New Mexico and will work hard to be a trusted member of the community.”

The study was conducted by Austin, TX-based Impact DataSource, which specializes in economic and fiscal impact projections. The firm has conducted thousands of economic impact analyses of new businesses, retention and expansion projects, developments and activities in all industry groups throughout the nation.

According to the analysis, New Mexico’s government would receive an estimated $62 billion in net fiscal benefits, $44 billion from new leases and royalties, assuming an average oil price of $40/bbl. About $8.5 billion would come from state severance taxes.

From an employment perspective, ExxonMobil’s activities are forecast to generate an average of 4,100 direct job opportunities every year for the next 40 years. And in the next four decades, the company’s operations are expected to generate a total of $29 billion in new wages, salaries and benefits.

The company’s plans to expand operations to produce more than 1 million boe/d will require about $55 billion in capital expenditures in Eddy and Lea counties, economists estimated. Southeastern New Mexico communities where ExxonMobil operates would receive an estimated $1.8 billion in net tax revenue, said the study.

More than 65% of those estimated tax revenues would flow to the state’s general fund. At current funding levels, those contributions would translate into $6 billion for higher education, $10 billion for health/human services, $18 billion for public schools and $6 billion for other state government services, which is almost equal to the entire 2018 New Mexico state budget.

New Mexico Gov. Michelle Lujan Grisham said the industry is crucial for residents and expressed optimism about the projections.

“The benefit to this state’s bottom line, as represented by investments from companies like ExxonMobil, has been enormous,” Lujan Grisham said. “My administration has been and will continue to be responsive to changes in the energy sector and the need for meaningful regulation and diversification as a means of ensuring a sustainable future — for our children, their education, the infrastructure that will support our collective future and more.”