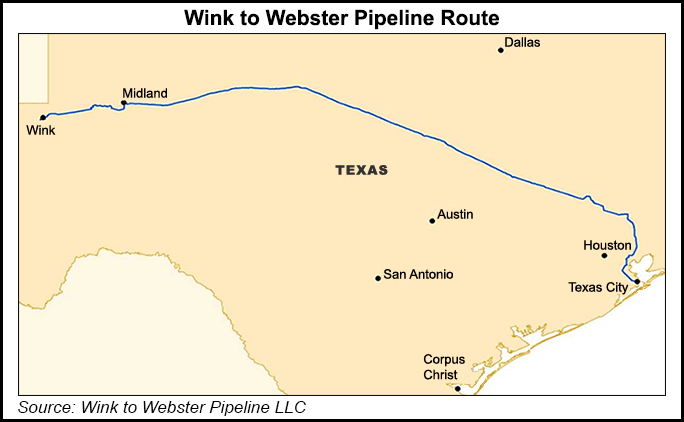 The Wink to Webster Pipeline LLC joint venture (JV), with origin points in West Texas at Wink and Midland, would transport crude to multiple locations near Houston, including Webster and Baytown, with connectivity to Texas City and Beaumont.

“The project is underpinned by a significant volume of long-term commitments and is targeted to commence operations in the first half of 2021,” the sponsors said.

Plains is to lead project construction of the Wink project on behalf of the JV, and it has initiated pre-construction activities. Construction is expected to create more than 3,100 jobs. Priority would be placed on using existing pipeline corridors and advanced construction techniques to limit community and environmental impacts.

The decision to advance the project comes one day after ExxonMobil announced a final investment decision (FID) to build a third unit at its Beaumont refinery east of Houston, which would increase capacity by more than 65%, or 250,000 b/d. The expansion was credited to increasing Permian oil volumes.

In addition to backing oil takeaway from the Permian, ExxonMobil is helping to move more natural gas from the basin, including through the 2 Bcf/d Permian Highway Project, which secured an FID last September.