ExxonMobil Corp. unveiled a bold strategic plan on Wednesday, announcing it would increase capital spend by 35% to $30 billion this year, with another hike to $35 billion eyed for 2020 as it advances a plethora of opportunities. 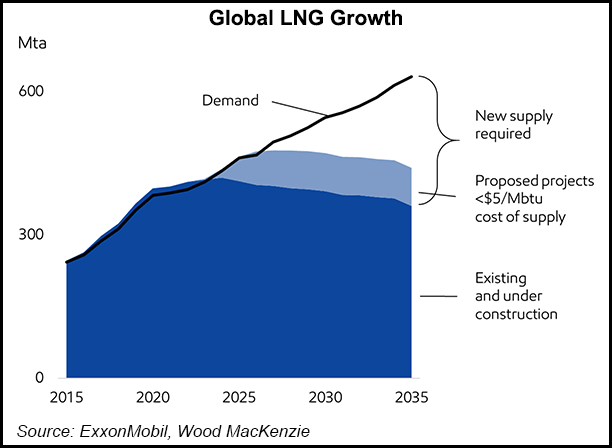 The executive team for the Irving, TX-based supermajor unveiled the strategy during its annual investor day at the New York Stock exchange. Plans are to increase annual earnings by 140%-plus by 2025 from 2017 if oil prices remain relatively stable.

The global natural gas portfolio has the best opportunities in more than 10 years, creating opportunities that have the potential to increase production and boost annual earnings, CEO Darren Woods said.

“Given the success we experienced last year and the progress we’re making on our plans, we have even greater confidence in our ability to grow value for our shareholders. We are exceeding the pace of our expected progress on the aggressive growth strategy we laid out last year. We continue to enhance our industry leading portfolio and are leveraging our competitive advantages in integration, scale, technology and execution to deliver long-term value for our shareholders.”

In the upstream, production growth is keyed to strategic acquisitions, exploration success and progress in global development plans, including to advance a broad portfolio of liquefied natural gas (LNG) projects, said upstream chief Neil Chapman. Last year, the company added 1.3 billion boe to its resource base, and the new strategy puts it on track to add more.

On the LNG front, ExxonMobil and partner Qatar Petroleum last month pulled the trigger on their long anticipated Golden Pass LNG project in Sabine Pass, TX, to capitalize on the low cost supply of U.S. natural gas and the expected growth in global demand. Construction is set to begin by the end of the month, with capacity of about 16 million metric tons/year (mmty), or 2 Bcf/d, with three liquefaction trains, each with capacity of 5.2 mmty.

Regarding Golden Pass, “we believe this will be the most advantaged U.S. gas exporting facility,” Chapman said. “One of the costs of liquefied natural gas is moving it around the world. And this gives us great flexibility to supply the Atlantic basin at much lower transportation costs than moving it from the Middle East…Also importantly, it gives a diversity of supply to those major purchases of liquefied natural gas around the world.

“If you’re a country and you’re putting more and more of your eggs in the basket of liquefied natural gas, you want supply diversity. This provides additional supply diversity to Asia-Pacific and to the Middle East.”

Still, ExxonMobil knows that in a fast growing market like LNG, there are bound to be “supply disconnects, there will be price disconnects,” Chapman said.

Another key LNG project in Mozambique, in which ExxonMobil is partnering with Eni SpA, is on track for a final investment decision this year. The development plan covering the first phase of Mozambique Rovema Venture SpA has been submitted for government approval, with Rovuma about to produce, liquefy and market gas from the Mamba fields in the Area 4 block offshore Mozambique. Proposed design and construction calls for two trains, with each able to produce up to 7.6 mmty. The Papua New Guinea (PNG) LNG project, which ramped up initially in 2014, also is progressing.

ExxonMobil is projecting LNG to increase by about 5% a year, “far and away the highest growth part of the gas business,” Chapman said. “Industry expects the demand will exceed 460 mmty by 2025. We anticipate the projects that are under construction today will satisfy 90% of the 2025 demand, which means significant capacity is required after that.

LNG is a fast growing business for ExxonMobil, Chapman said.

“We are well aware that there are other potential liquefied natural gas opportunities out there in the industry. It is well documented…We know that some of these projects won’t meet the same time schedule, some will go faster. Some will go slower.” And yes, he said, ExxonMobil is still looking for more LNG opportunities.

Closer to home, ExxonMobil on Tuesday previewed its five-year strategy for the Permian Basin, which is primed for more rigs, people and money. Plans are to increase output across its one million-plus acres to more than 1 million boe/d by 2024, up nearly 80%. ExxonMobil now has 48 drilling rigs now in operation and plans to increase its rig count to about 55 by the end of the year.

On the chemicals front, an ambitious expansion is underway east of Houston at the Beaumont refinery to make it among the largest in the country. Also on the drawing board is a polypropylene production unit in Baton Rouge, LA, sanctioned earlier this month to expand natural gas-fed feedstock capacity along the Gulf Coast by up to 450,000 tons/year. Progress also continues toward sanctioning a massive ethane processing complex near Corpus Christi in South Texas that it would own jointly with Saudi Arabia.

Plans were outlined for 13 chemicals facilities, including the Corpus project, with seven already online. The investments overall are expected to deliver 30% sales growth by 2025, mostly driven by technology enabled performance products.

Beyond the United States, executives emphasized South American prospects in offshore Guyana and in Brazil. In December, ExxonMobil had estimated Guyana resources in the Stabroek Block at 4-5 billion boe. On Tuesday, the resources were increased by 10% to 5.5 billion. Last year, the company also added about 800,000 acres to its Brazil portfolio, giving it around 2.3 million acres.

The updated earnings projection to 140%-plus by 2025 compares with last year’s estimated increase of 135% between 2017 and 2025, based on 2017 adjusted earnings. Cumulative earnings potential from 2019 through 2025 has increased by about $9 billion, supported by improvements to the investment portfolio and divestment plans.