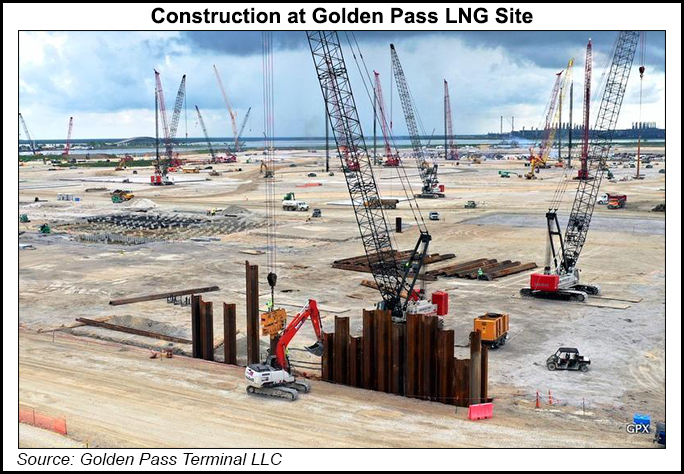 Natural gas realizations jumped 22% because of European supply concerns and efforts to build inventory ahead of winter. That more than offset decreasing crude realizations, which fell 12% on modest supply increases.

The “strong gas realizations” were not driven only by LNG trading, said CFO Kathryn Mikells, as the overall portfolio is 60% natural gas and 40% liquefied natural gas.

“LNG tends to be tied to crude-related prices, with a three- to six-month lag,” she said during a call to discuss financial results on Friday. “So we’re seeing the benefit of that lag now kind of coming through our results and that really came through in the quarter.”

From a demand perspective, “you’re obviously seeing a really tight market,” Mikells said. “We saw in Europe the building of inventory and how that has driven up prices…ahead of the winter. And so structurally, we would say, there’s going to continue to be a tight market until supply and demand comes into equilibrium.”

There are “only two ways that happens – either more supply or reduced demand,” she said. “And supply, especially supply of LNG, does take time to bring online. It isn’t something that you know, is just a spigot that can be turned on overnight. The markets obviously are responding to that.”

ExxonMobil has LNG projects in the queue including in Mozambique, where the Coral project recently reached first gas production. The Golden Pass facility that ExxonMobil is building with Qatar on the Texas coast “is going to be coming online in 2024,” Mikells noted. “So we have investments that will bring more capacity online, and the industry obviously is responding to this but it is going to take some time…

“We’re always mindful of what’s happening in terms of inventories and when inventories are being built and being drawn on, and what that means in terms of near-term market conditions. It’s something we always keep an eye on.”

Regarding the tight natural gas supply, CEO Darren Woods said, “once we get through this period where you’re building inventories, you’ve kind of lost some of that seasonality. Once we get to a more of a balanced position, which I think is a couple to three years out, frankly, we’ll start to see that seasonality show back up again when we’re back in more stable markets.”

Longer term, “gas was always going to play a critical role in world economies for quite some time,” Woods said. “Initially it will go into power generation and back out coal. That’s one of the big benefits of gas today.

“But longer term, gas will continue to address emissions and the energy system transition…Gas can be used for ammonia and hydrogen, along with carbon capture, to move toward lower emissions fuels and address carbon dioxide (CO2) emissions.

“I think gas is going to play an important role in that,” Woods said. “Our view hasn’t really changed that there’s going to be a fundamental need for gas for quite some time. And we’re positioning ourselves to make sure that the portfolio of projects that we develop to bring on natural gas on the left hand side of the cost of supply curve will continue to be focused on making sure that we’re competitive under any price scenario that we can envision out there.”

Woods praised the recent passage of the Biden administration’s Inflation Reduction Act (IRA), which “opened the “aperture” to cost effectively abate CO2 emissions. The IRA tax credits to reduce industrial CO2 would be competitive in the Houston area by 2030, according to the company.

Carbon capture and sequestration in the IRA also “meaningfully expand market opportunity in the United States,” and likely will “spur job creation and economic activity in an emerging low carbon industry.”

ExxonMobil has skin in the game already, with notable carbon capture projects on the drawing board that would be sited along the Texas and Louisiana coasts. Some were launched before the IRA was enacted.

The “challenges associated with economic projects to capture and sequester CO2” center around how to reduce the cost to dilute the concentration of emissions, he said. “The IRA allows you to more accurately, economically pursue more dilute streams. So that opens up the opportunity space there.”

Another important variable “is the distance to sequestration and the transportation costs of moving CO2,” he noted. “The further away you are from…the storage sites, the higher the cost, and again, the IRA helps with that space. And then obviously, there are some incentives” to advance hydrogen blending and direct air capture.

“To achieve the ultimate objective in driving emissions down to net zero, you’re gonna need to capture a lot of dilute streams,” Woods said. “And the cost will be a lot higher, whether it be through market forces…or additional policy.”

Offshore Guyana, where ExxonMobil is leading the Stabroek development, gross production increased to nearly 360,000 boe/d, with Liza Phase 1 and 2 production exceeding design capacity by more than 15,000 b/d. In addition, two new discoveries were recently announced, extending the pipeline for development.

Capital and exploration expenditures were $5.7 billion in the third quarter, bringing year-to-date 2022 investments to $15.2 billion. That puts full-year spending guidance on track at $21-24 billion.