A discovery that may represent a natural gas resource of 5-8 Tcf has been discovered offshore Cyprus by ExxonMobil Corp., which partners in the block with Qatar Petroleum. 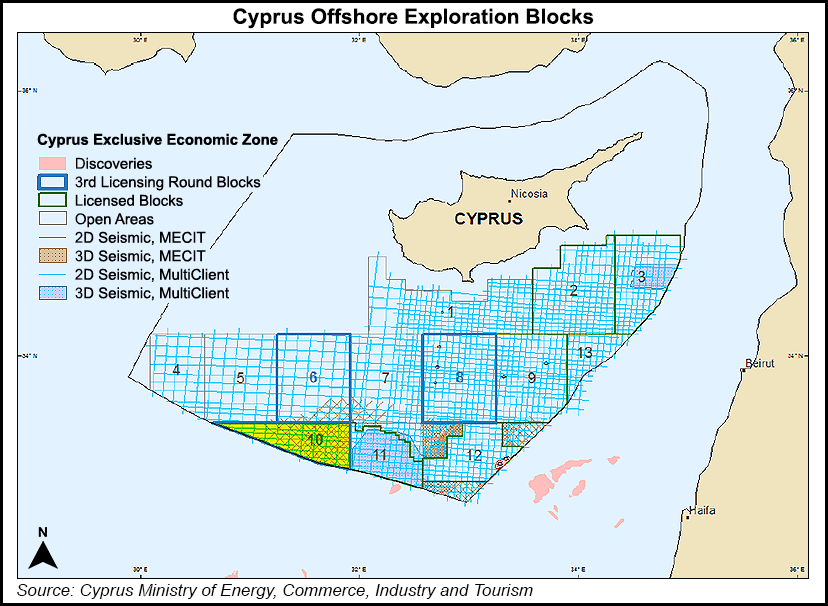 Further analysis is planned in the coming months to better determine the resource potential.

“These are encouraging results in a frontier exploration area,” said President Steve Greenlee of ExxonMobil Exploration Co. “The potential for this newly discovered resource to serve as an energy source for regional and global markets will be evaluated further.”

Glaucus-1 is the second of a two-well drilling program in the block. The first well, Delphyne-1, did not encounter commercial quantities of hydrocarbons.

Cyprus Energy Minister Georgios Lakkotrypis said Thursday the discovery may lead to even more off the coast of the island nation, which has stated that it wants to take part in becoming an energy source for Europe.

“Glaucus is a giant,” said Wood Mackenzie’s Robert Morris, senior research analyst of the European upstream sector. “It will be one of the biggest discoveries of the year…Based on ExxonMobil’s announcement and field analogues, we think the field could hold 4.55 Tcf of recoverable resource, or around 800 million boe.

“The discovery maintains the East Mediterranean’s position as one of the world’s premier exploration hotspots,” Morris said. “The discovery is more evidence of the huge success the majors have enjoyed in exploration in the years since the industry downturn. ExxonMobil has been at the forefront of that success, with its string of world-leading discoveries in Guyana — and now Cyprus.”

For Qatar Petroleum, “Glaucus is a continuation of its 2019 success, following on from its 25% stake in the Total-operated Brulpadda discovery in South Africa. It is also vindication of its recent strategy of partnering with majors in high profile exploration basins.”

However, commercializing the Glaucus gas via liquefied natural gas (LNG) exports is not straightforward, Morris said.

“There is limited space in local markets and existing export infrastructure. And the volume is insufficient for ExxonMobil and its partner Qatar Petroleum to feed a two-train LNG plant, which had been the partnership’s goal.”

There is the potential for producers to collaborate on Cyprus gas discoveries, Morris said.

“Eni and Total made similar giant discovery in the neighboring block last year. A joint development would potentially serve up enough gas to support a greenfield LNG development. A partnership would echo collaboration at ExxonMobil and Eni’s LNG developments in Mozambique.” Eni and ExxonMobil sanctioned Coral South LNG last year.

Meanwhile, Houston-based super independent Noble Energy Inc. already is at work to complete the initial phase of Leviathan, another massive gas reservoir southeast of Cyprus off the Israeli coast. Leviathan is estimated to contain 4.5 Tcf.

Noble earlier in February in its 4Q2018 results said Leviathan was 75% complete and had sales agreements in place for 1 Bcfe/d-plus.