To paraphrase a Hank Williams classic, the little dogs digging in the Permian Basin may need to move it on over, because the big dog is moving in. 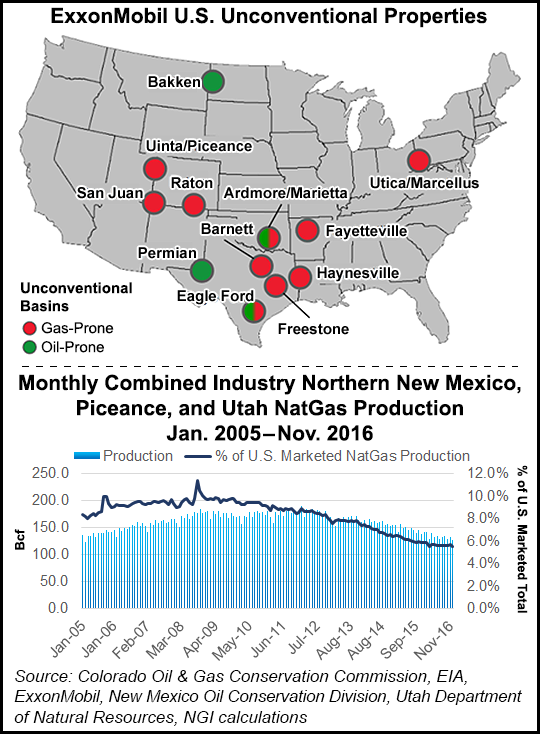 The biggest of the big dogs, ExxonMobil Corp., is raising more rigs and is planning to dig super-laterals that extend at least two miles, the longest ever in the play, the investor relations chief said Tuesday.

Using its upstream expertise and solid bottom line, ExxonMobil has built a portfolio that’s hard to beat in West Texas and southern New Mexico, investor relations chief Jeff Woodbury told analysts. The company’s fourth quarter and full-year 2016 performance was the point of the call, but many of the analysts pressed him for details about the hottest play in North America. Woodbury obliged, to a point, noting that the annual analyst day on March 1 should help to fill in the blanks.

The interest by analysts followed a mega-transaction — even for the Permian — in mid-January, as ExxonMobil struck a deal valued at close to $6.6 billion to acquire Bass family-operated land in New Mexico. The transaction more than doubled the Permian resource potential to about 6 billion boe, and as important, linked leaseholds together, allowing contiguous drilling. The acquisition added around 3.4 billion boe of resource potential across 250,000 net acres in the northern Delaware sub-basin.

Digging deep and wide is the plan. Overall development of the new Delaware leasehold is long-term, but it should support “a multi-decade production plateau of about 350,000 boe/d, so a very substantial addition to liquids production as well,” Woodbury said.

“Less than 5% of the acquired resource has been developed to date, providing substantial opportunity for future growth.”

ExxonMobil plans “to drill the longest laterals within the play, which will maximize per well recoveries and help generate market-leading development costs. More than 85% of the wells are expected to have lateral lengths two miles or longer because the acreage is not constrained by traditional land lease issues.”

The average drilling footage/day in the producer’s Permian leasehold since 2014 has increased by about 85%. The U.S. unconventional portfolio, transformed in 2010 with the takeover of onshore giant XTO Energy Inc., made ExxonMobil the No. 1 natural gas producer in North America. That fact hasn’t changed, but as pricing fell out of favor, the portfolio has been tweaked to concentrate on liquids and crude oil.

Today, the XTO subsidiary is producing more than 700,000 boe/d from the U.S. onshore. Liquids now comprise around 38% of XTO’s output. Notably, since 2010, “XTO has grown liquids production at a compounded annual growth rate of about 11% and which currently represents about 12% of the corporation’s global liquids production,” Woodbury said.

The supermajor has endless options, both for its natural gas and oil targets in North America’s onshore. Competition for Permian land is strong, but ExxonMobil’s powerful financial resources and tendency toward watchful waiting is paying off. The Bass transaction increased ExxonMobil’s Permian well inventory for wells that yield “at least a 10% rate of return at $40/bbl to more than 4,500 wells,” Woodbury said. “We currently produce more than 140,000 boe/d net in the Permian and are operating 10 rigs. This is expected to move higher in 2017 as we begin activity on the newly acquired acreage.”

In sync with the expansion, ExxonMobil last November formed a joint venture with Sunoco Logistics Partners LP, Permian Express Partners LLC, to expand crude oil transportation options to Gulf Coast refineries for not only Permian production, but growing output from the Ardmore Basin in Oklahoma.

Activity is going to be ramped commensurate with the leasehold development requirements. “We’re very positive about this, obviously given the acquisition and we want to get to it right away,” said the investor relations chief.

The long-term objective is to pace of activity so that it “maximizes the learnings that we’re integrating and captures the technology application that we want to apply in order to achieve these outcomes like the length of the laterals…This acquisition and investments that we planned under it are going be very competitive to our existing inventory of opportunities.”

The “short-cycle inventory” within the less-expensive-to-drill unconventional leaseholds is a big motivator. ExxonMobil’s 2017 capital expenditure (capex) budget of $22 billion is about $3 billion more than in 2016. It’s a certain bet that more of the budget will go to unconventional liquids/oil targets, particularly in the new Delaware leasehold.

“We feel good about our acreage position in the other unconventional basins,” Woodbury said. ExxonMobil has a “meaningful presence in every one of them…As an indicative guidance, I would tell you it’s likely going to add additional capex to our short-cycle investments in order to move forward on the acreage that we picked up in acquisition.”