ExxonMobil Corp. on Thursday “unequivocally” rejected allegations that it misled investors about how its operations may impact climate change after the New York attorney general launched an investigation.

Attorney General Eric Eric T. Schneiderman’s office this week subpoenaed ExxonMobil, demanding financial records, emails and other documents that date back to the 1970s. Several politicians and conservation groups have called for a probe after news reports claimed that ExxonMobil for years hid research about the effects of oil and gas development on climate change (see Daily GPI, Oct. 23). New York’s Martin Act passed in 1921 gives the attorney general extraordinary powers and discretion to investigate financial fraud, exceeding those given any regulator in any other U.S. state.

“We unequivocally reject the allegations that ExxonMobil has suppressed climate change research contained in media reports that are inaccurate distortions of ExxonMobil’s nearly 40-year history of climate research that was conducted publicly in conjunction with the Department of Energy, academics and the United Nations [UN] Intergovernmental Panel on Climate Change,” said Ken Cohen, vice president of public and government affairs. During a conference call late Thursday with reporters, he said the oil major had funded mainstream climate science research since the 1970s and contributed to dozens of peer-reviewed scientific papers.

Point of fact, ExxonMobil is the largest natural gas producer in the United States, Cohen said. Natural gas is a “cleaner” fossil fuel than oil or coal, offering a compelling reason to buy U.S. onshore gas behemoth XTO Energy Inc. five years ago (see Daily GPI, June 28, 2010). In fact, CEO Rex Tillerson said at the time, “We believe gas is the fuel of choice for power generation, producing fewer greenhouse gas emissions than other electrical-generation fuels, such as coal.”

ExxonMobil also has included since 2007 information about the business risks of climate change in its annual Securities and Exchange Commission 10-K filings, corporate citizenship reports and other documents provided to shareholders, Cohen said. About that same time, ExxonMobil began using a proxy cost for carbon in its internal planning.

“We are proud of our record of disclosing to investors and the investment community what we believe are material facts applicable to our business,” he said. The Irving, TX-based company now is assessing its response to the subpoena, which Cohen said was “broad.”

Tillerson discussed the controversy this week during an interview on Fox Business News with Maria Bartiromo, who asked him to respond to accusations that ExxonMobil was “deceiving the American public” about climate change to protect profits.

“Well, the charges are pretty unfounded…without any substance at all, and they’re dealing with a period of time that happened decades ago,” he said of the New York investigation. “There’s a lot I could say about it,” but he was unsure “how helpful it would be for me to talk about it, particularly as we’re leading up to some very important meetings” at the UN Climate Change Conference in Paris. Discussions beginning late this month are to center on a potential framework for global emissions reductions (see Daily GPI, Nov. 5; Oct. 16).

“I really don’t want this to be a distraction,” Tillerson said. “There are some serious issues that need to be talked about at that…convention…

Some critics have accused the entire oil and gas industry of hiding the risks of climate change “just like the tobacco companies hid the risks of smoking,” Bartiromo said.

“Well, nothing could be further from the truth,” Tillerson said. “We’ve been very active participants in supporting scientific discovery. We funded some of the very early attempts to model the climate…and still do.”

ExxonMobil was “the only major oil company,” he said, to participate in the UN Intergovernmental Panel on Climate Change (IPCC) “since its inception, and we still are a participant. Our scientists have peer reviewed the work done by the IPCC, we have authored many of the IPCC’s reports and have published more than 50 of our own reports on subject, so we’re hardly hiding from the issue.”

Cohen acknowledged on Thursday that the company for a time decades ago had aligned itself with groups that were lobbying to keep the United States from joining in the global climate change treaty commonly called the Kyoto Protocol. Predecessors of BP plc and Royal Dutch Shell plc also were members of the coalition.

“We stopped funding them in the middle part of the past decade because a handful of them were making the uncertainty of the science their focal point,” Cohen told reporters. “Frankly, we made the call that we needed to back away from supporting the groups that were undercutting the actual risk” related to climate change. “We recognize that risk.”

The critics of ExxonMobil are legion. However, Michael Webber, deputy director of the Energy Institute at the University of Texas at Austin, told a reporter that the company “has probably been the biggest funder of research into decarbonization, maybe even more than the federal government.” 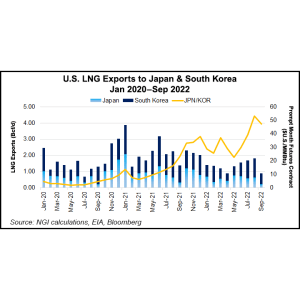 Japan’s Ministry of Economy, Trade and Industry (METI) is planning a strategic LNG reserve to ensure the country has enough natural gas to meet domestic demand as global competition ramps up.  METI’s proposal is primarily aimed at preventing gas shortages and preparing Japan, one of the world’s largest buyers of liquefied natural gas, for battling…