ExxonMobil on Friday fired back in response to a report that it was under federal investigation for overvaluing its Permian Basin assets. 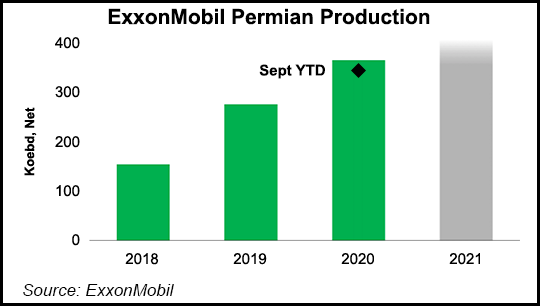 According to a story published on Friday by The Wall Street Journal, the Securities and Exchange Commission is investigating ExxonMobil following a whistleblower complaint filed last fall. The complaint, said the newspaper, claims that the supermajor “overvalued one of its most important oil and gas properties, according to people familiar with the matter.”

The Journal said it had reviewed a complaint alleging that “several people” involved in valuing a Permian asset claimed that during an internal assessment in 2019, “employees were being forced to use unrealistic assumptions about how quickly the company could drill wells there to arrive at a higher value.”

Citing “one person familiar with the matter,” the Journal said “at least one of the employees who complained was fired last year.”

ExxonMobil, one of the most active operators in the Permian, wasted no time in its reply before midday Friday.

The management team said it stood by “statements to investors, and, if the company were to be asked about this matter by authorities, it would provide information that shows the accuracy of its valuation of the company’s Permian assets, and that actual drilling performance exceeded the plans.”

The Irving, TX-based supermajor said it has “an extensive and rigorous planning and budgeting process that considers many sensitivities and ranges of outcomes,” which takes into account “thousands of inputs including hundreds of drilling curves over a seven-month period.

“Learning curves were developed as a collaborative effort between the drilling team executing the work, who had the most expertise with current drilling performance, and the development team, who leveraged data from demonstrated learning curve performance in other unconventional projects. There were multiple learning curves considered and evaluated throughout the process.”

ExxonMobil said it was “obvious that the employees who are alleged to have made the false claims lack the breadth and depth of experience to understand how and why drilling curves are routinely revised as technologies improve and understanding of the resource base expands. Historically, the company’s unconventional drilling performance has increased in short timeframes as engineers and planners gather more data in basins across its portfolio.”

Last month, ExxonMobil announced it was backing off ambitious goals to increase spending, and said it would reduce the book value of some of its assets, particularly the U.S. dry natural gas portfolio, by up to $20 billion. Following an annual strategic review by the board, it revised its capital spending outlook and production forecast to 2025.

Impairing the gas assets is expected to result in a one-time charge to 4Q2020 results of $17-20 billion after taxes. No material future cash expenditures were forecast related to the impairments. ExxonMobil also took a $2 billion writedown on the value of the U.S. gas assets for 4Q2016.