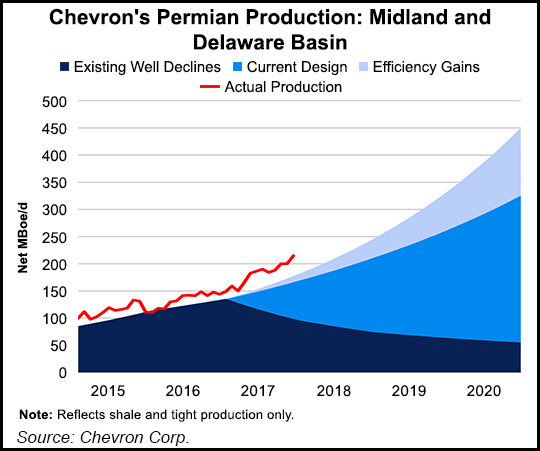 ExxonMobil only days ago announced it would invest more than $50 billion in the United States over the next five years and triple Permian output. The investments are coming in part from U.S. tax reform legislation, which provided the operator with a $5.94 billion benefit during 4Q2017.

CEO Darren Woods said the “magnitude of our historic investment in the U.S…strengthens our commitment to further grow our business here.” The newly enacted tax reform enhances the integrated portfolio, “supported by the improved business climate.”

ExxonMobil is investing billions to boost production across the Permian Basin in West Texas and New Mexico by expanding existing operations, enhancing infrastructure and building manufacturing sites.
Investor relations chief Jeff Woodbury again was at the helm during Friday’s conference call. He provided more color about U.S. operations, particularly from unconventional targets in the Permian Basin’s Delaware and Midland sub-basins, as well as the Bakken Shale.

“Our total production from the Delaware, Midland and Bakken basins is now about 200,000 boe/d,” Woodbury said. “We’re progressing plans to ramp up to around 36 operated rigs in the Permian and Bakken by year-end, of which 30 will be in the Delaware and Midland basins.”

Taking a cue from other onshore explorers, ExxonMobil is drilling longer lateral wells, made easier with its contiguous acreage positions in the two onshore plays.

“In the Bakken for example, we’ve made significant progress improving productivity to optimize completions,” he said. “Recent wells have initial production rates in the top quintile of surrounding industry wells with the best 30-day average rate exceeding 2,500 b/d.”

The longer laterals and optimized completions “could potentially generate a 15-to-20% increase in our expected ultimate recovery from the Bakken wells, further supporting our growth plans in tight oil.”
Plans are to drill three 15-20 three-mile laterals in the Bakken this year.

Transferring those North Dakota learnings to West Texas and New Mexico, ExxonMobil recently ramped up its first 12,500-foot lateral well in the Delaware and recently finished drilling its first three-mile lateral in the Midland.

“To support our production growth plans, ExxonMobil will be investing more than $2 billion in midstream infrastructure, including expansion of the Wink terminal” in West Texas, Woodbury said. Additional takeaway would move production to ExxonMobil’s manufacturing facilities in the Gulf Coast region.
More details are expected next month at the annual analyst meeting, he said.

ExxonMobil’s profits in 4Q2017 totaled $8.38 billion ($1.97/share), fueled by the U.S. tax gains, versus a year-ago profit of $1.68 billion (41 cents). Impairments totaled $1.5 billion, mainly on writing down the value of Canadian upstream properties in the Horn River Basin and for a decline in the value of U.S. Gulf of Mexico dry natural gas.

Chevron replaced more than 150% of the reserves it produced during 2017, led by several production milestones. Chevron began its first liquefied natural gas (LNG) shipments in Australia from the third train at the Gorgon project and the first train at Wheatstone.

Chevron’s reserves to production ratio “stands at a healthy 11.7, demonstrating the strength and sustainability of our business,” he added.

Last year the Permian was the largest contributor to reserves additions, and where Chevron continues to lower its cost structure.

“As we continue to ramp up our rig fleet, we are confident this pattern should continue,” he said. “Importantly, we expect that our 2018 production will continue to grow by 4-7%, driven primarily by Australian LNG and the acceleration of development activities in the Permian, where investment economics continue to improve.”

Chevron now is running 16 operated rigs in the Permian and it plans to end this year with 20 company operated rigs. “And in support of our development program, we are currently employing six pressure pumping crews,” said Wirth.

Last year Chevron added more than 60,000 acres to its legacy Permian acreage through various swaps, joint ventures, farmouts and sales, said the CEO. The transactions not only improve capital efficiency and create value by consolidating land positions, but they allow longer laterals and other infrastructure efficiencies.

“Last year’s transactions enabled nearly 600 additional long laterals to be added to our well inventory,” Wirth said. “We intend to continue this activity to consolidate our land positions and optimize the value of our future developments.”