The Permian Basin may face infrastructure constraints, a labor shortage and scarce services, but deep-pocketed Chevron Corp. and ExxonMobil Corp. plan to direct more talent and resources over the long term into the estimable oil and natural gas resources. 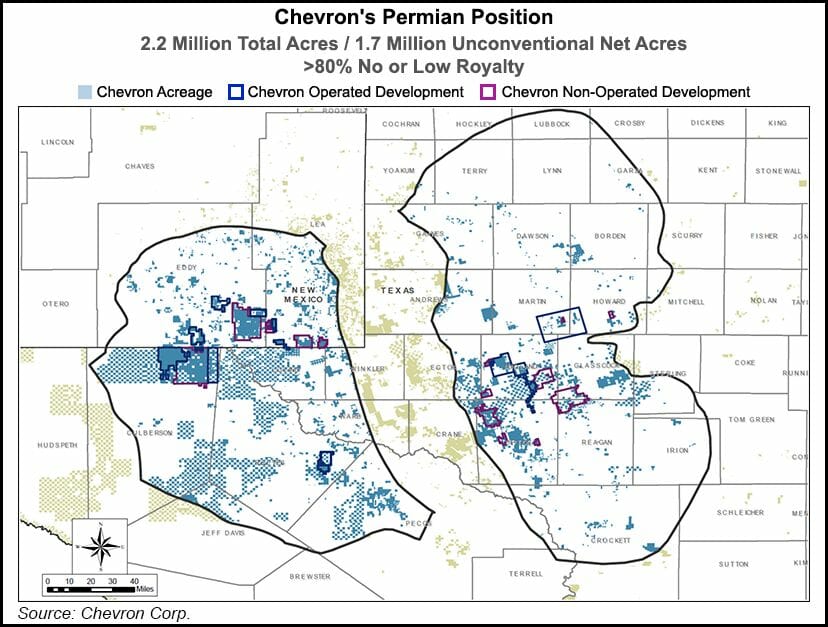 Chevron, which unveiled its near-term strategy Tuesday at the annual analyst security conference, expects to more than double Permian output to 900,000 boe/d by 2023, a nearly 40% increase from a previous forecast.

ExxonMobil, one day ahead of its annual analyst meeting, on Tuesday said it should produce more than 1 million boe/d from the New Mexico-West Texas behemoth by the end of 2024, an increase of nearly 80%.

Chevron is guiding for a fleet of 20 operated rigs in the Permian, as well as seven to 10 net nonoperated rigs over the period. ExxonMobil now has 48 rigs running across the play, with plans to raise up to 55 by the end of this year.

“We expect to deliver a 3-4% compound annual production growth rate through 2023,” Chevron upstream chief Jay Johnson said. “Our strong resource base gives us the flexibility and choices that allow us to fund the projects we believe will yield the best returns.”

Chevron’s best returns are in the Permian, CEO Michael Wirth said. Asked why, he had a simple explanation.

Chevron’s position in the Permian Basin “just continues to get better and underpins the depth of our resource base,” Wirth said. “Today, we are updating our assessment of resource to 16.2 billion unrisked boe, up about 75% from a little over 9 billion boe just two years ago.

“Continued appraisal success, improved drilling and completion performance, ongoing land optimization and ever improving technology have allowed us to characterize more benches and increase our inventory of resource. The same drivers have also increased the economic value of our acreage.”

In December the San Ramon, CA-based supermajor earmarked $20 billion for 2019 organic capital and exploratory (C&E) spending, a near-$2 billion boost year/year, with $7.6 billion specifically targeting the U.S. upstream. Between 2021 and 2023, annual C&E now is set at $19-22 million. The ratable investment should deliver steady growth, according to Johnson.

Based on Chevron’s valuation models, the Permian position has more than doubled using the same price assumptions. Based on what the company has determined to date, Wirth expects to see other operators also find more compelling value from their Permian leaseholds.

“I believe you will see a dramatic re-rating of this asset,” Wirth told analysts.

The company’s unique position in the Permian is “characterized by long-held acreage, zero-to-low royalty on more than 80% of our land position, and minimal drilling commitments,” Johnson said. These attributes, as well as deploying better technologies, are driving higher returns, stronger cash flows, and increased value.

In the Delaware sub-basin, the average estimated ultimate recovery for wells put online last year was 2 million boe, while in the twin Midland it was 1.3 million boe.

What the executives made clear is that Chevron does not need to sanction any major capital projects for the next five years, but it has many options to do so if it wants. By the end of 2023, resources in hand are forecast to contribute around 1.5 million boe/d of new production.

“With the majority of our new production coming from shale and tight assets, our growth is disciplined and ratable with lower risk,” Johnson said.

Chevron expects to reach $30 billion of cash generation at $60/bbl Brent oil prices in 2019, which would be used to fund C&E, as well as a 6% annual dividend increase and $4 billion in share repurchases.

“Chevron is operating from a position of strength,” Wirth said. “The balance sheet is strong. Our dividend breakeven is low. We’re disciplined with capital. And we’re generating strong free cash flow. Chevron has an extremely compelling investment proposition that is going to continue over the long-term.”

In parallel with Chevron’s news, ExxonMobil said it plans to increase its Permian output to 1 million boe/d as early as 2024. The size of its resource base in the Permian is about 10 billion boe, but the company expects that to grow as analysis and development activities continue.

“We’re increasingly confident about our Permian growth strategy due to our unique development plans,” said Senior Vice President Neil Chapman. “We will leverage our large, contiguous acreage position, our improved understanding of the resource and the full range of ExxonMobil’s capabilities in executing major projects.

“Our plans are attractive at a range of prices and we expect them to drive more value as we continue to lower our development and production costs.”

Permian investments are expected to produce double-digit returns, even at low oil prices, according to ExxonMobil. At $35/bbl oil, for example, Permian production would have an average return of more than 10%.

The anticipated increase in production would be supported by further evaluation of the supermajor’s Delaware holdings. The resource is expected to fuel infrastructure development to secure capacity to transport oil and natural gas to ExxonMobil Gulf Coast refineries and petrochemical operations through the Permian Highway Project and Double E Pipeline natural gas systems, as well as the Wink-to-Webster Pipeline LLC oil pipeline.

The Kinder Morgan Inc.-led Permian Highway, a 2 Bcf/d natural gas system sanctioned last year, would transport supply through a 430-mile pipeline from Waha in West Texas to Katy, outside of Houston, with connections to the Gulf Coast and Mexico markets.

A Summit Midstream Partners LP subsidiary last fall began testing support for Double E via binding open season to move Permian gas from the New Mexico Delaware to the Gulf Coast and into Mexico. Although ExxonMobil was not linked to the project at the time, Summit said it had a long-term binding commitment with an undisclosed foundation shipper for up to 500,000 Dth/d of firm transportation capacity.

One of its key advantages in the Permian, according to the executive team, is the extensive leasehold, which runs across more than one million net acres. The contiguous position allows multi-well pads in large development corridors that connect to gathering systems, reduce development costs and accelerate production growth.

Infrastructure is underway to support volume growth, with construction plans at 30 sites to enhance oil and gas processing, water handling and provide takeaway capacity. Construction activities include central delivery facilities designed to handle up to 600,000 bbl of oil, 1 Bcf/d of gas and enhanced water-handling capacity through 350 miles of already constructed pipeline.

“These investments support growth plans and ensure that as production levels continue to rise, we are well positioned in processing and transportation capacity,” Chapman said. The investment plans are expected to also reap benefits for the region in property tax revenue, economic development and creating jobs.

In addition to the Permian, Chevron also is working on shale and tight assets in Canada, Appalachia and Argentina, using learnings from the Permian to reduce costs.

Chevron plans to launch pilot programs this year on 162,000 net acres in the northern part of Argentina’s Vaca Muerta formation in NeuquÃ©n province. Executives see the potential for about 2,000 wells at the El Trapial, Loma de Molle Norte and Narambuena deposits.

“We believe these three areas could offer an incremental 2 billion boe of resource,” Johnson said. In terms of infrastructure, “if those pilots are successful, there is already an existing oilfield in El Trapial, so there is some basic infrastructure already in that general area. But clearly with the capacity that we could go to, we’d have to see some further build out of infrastructure.”

Infrastructure in southern Vaca Muerta at Loma Campana, where Chevron has a JV with Argentina’s YPF SA, “is really not a limitation, it’s just been…at what pace do we want to develop.”

Loma Campana development costs are estimated at $11/boe, with average well lengths of 7,500 feet. Estimated ultimate recovery has increased by 80% since 2016 and development costs have decreased by 45%. The focus for 2019 is on “high density completions” and improving hydraulic fracture efficiency. The company is planning 60-70 horizontal wells across the 210,000 net acre leasehold in Vaca Muerta this year.