The trio of events that appeared to upset the status quo last Wednesday at ExxonMobil, Chevron Corp. and Royal Dutch Shell plc demonstrates increasing risks ahead for oil and natural producers as they transition for the new energy world ahead, according to analysts. 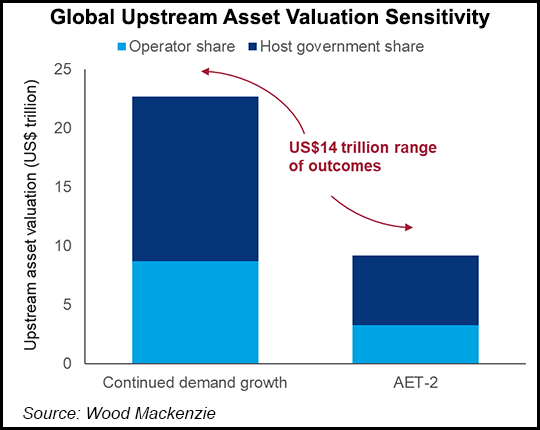 Shareholder votes at the annual general meetings for ExxonMobil and Chevron, as well as a Dutch court ruling against Shell, are “aimed at prodding the companies to take greater efforts to address greenhouse gas emissions” to improve environmental, social and governance (ESG) issues, Moody’s Investors Service analysts said.

ExxonMobil shareholders elected at least two candidates by Engine No. 1, which owns only 0.02% of stock. Nearly one-third (61%) of Chevron’s shareholders called for limiting emissions from customers, aka Scope 3. And a Dutch district court said Shell must reduce its carbon emissions at a faster pace than planned.

“These actions represent a substantial shift in the landscape for oil companies, which had previously prevailed in courts, and largely fend off significant shareholder votes, on climate-related matters,” the Moody’s analysts said.

According to Wood Mackenzie, the transition to a net-zero carbon future puts uncertainty into an estimated $14 trillion worth of upstream oil and natural gas assets, with no assurance that demand will continue to rise.

The ExxonMobil vote is the most consequential of the three events, according to Moody’s.

“The outcome is binding, cannot be appealed, and likely presages similar results in future board elections at other U.S. oil companies,” the analysts said. “The increasing potential for ever-more stringent investor climate- and emissions-related investment thresholds are likely to lead to higher capital costs and diminished access to capital for oil companies that do not keep pace with investors’ expectations for transitioning to a low carbon business model.”

Moody’s viewed Shell’s existing plan to reduce carbon emissions as more ambitious than most of its peers. The court ruling “amplifies our sense that the industry will have to decarbonize substantially more quickly than companies are currently planning, through a combination of policy measures, litigation, investor pressure, accelerated technological advances in renewable energy and changing consumer preferences.”

Evercore ISI analysts have detailed the “mega investment” that the energy transition will require across the board. “The pressure is ratcheting up on energy companies,” said the analyst team led by James West.

“ESG and impact investing were clearly on display” last Wednesday, West noted. “We believe these events will further accelerate the energy transition and may lead to additional activist campaigns and lawsuits.”

The revolts “are consistent with a pattern of increased shareholder awareness,” West said.

It’s not all about climate, but the concerns around inaction by companies and “slow value creation.”

Evercore’s team expects more “shareholder engagement across all industries and verticals. These are the market policy drivers we envisioned coming to fruition to accelerate the Transition, albeit a bit faster than we originally expected.”

Analysts with Morgan Stanley Research said the shifts underscore the growing influence of ESG on the energy sector.

Global flows into ESG funds “have risen more than two times since early 2020 and the U.S. appears positioned for an ESG inflection,” analysts said. “Shareholder and stakeholder interests have begun to align as investors incorporate criteria beyond direct financial metrics, such as carbon intensity, into portfolio allocation decisions.”

Energy operators need to heed calls to reduce emissions or there could be a “potentially challenging backdrop to compete for capital,” according to Morgan Stanley.

There are many business opportunities on the horizon, too, the analysts noted.

“Relative to European peers, large U.S. energy  companies have lagged on the advancement of sustainability strategies. Most notably, the U.S. sector has pivoted less aggressively toward low carbon technologies that reduce reliance on long-term oil and gas demand.”

The U.S. majors are focusing on the “new energies,” technologies that provide “competitive advantages and underinvestment is prevalent, including carbon capture and storage, hydrogen, and renewable fuels.”