ExxonMobil Corp.’s quest to remain the biggest operator in the Ardmore Basin’s Woodford Shale remains on track after the super major agreed to pay $147.5 million to buy the bulk of BNK Petroleum Inc.’s leasehold in the Tishomingo Field. 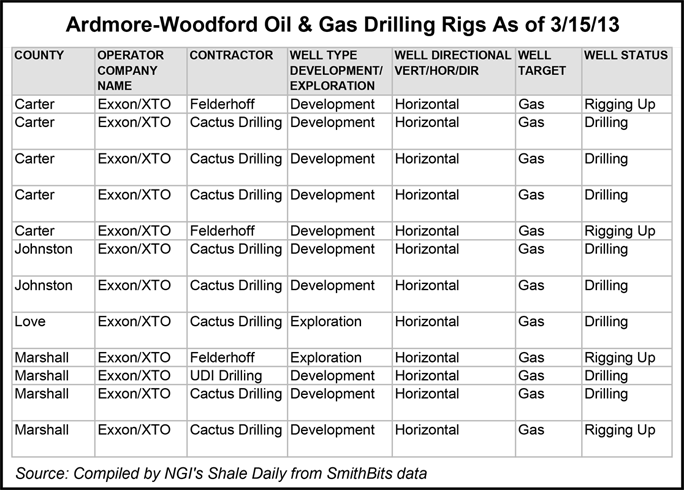 Most of BNK’s 12,000 net acres in the Oklahoma field, which straddle Carter and Johnston counties, are being sold to XTO Energy Inc. BNK Petroleum (US) Inc. would retain the Caney and Upper Sycamore formations. Tishomingo now is BNK’s only producing U.S. asset, with proved and probable reserves worth an estimated $240.2 million.

The Ardmore Basin holds some of ExxonMobil’s most prized liquids assets in the U.S. onshore — and the one play that is cited frequently (see Shale Daily, July 30, 2012; Feb. 1, 2012). Including Ardmore Basin targets outside the Woodford Shale, ExxonMobil last year held an estimated 300,000 net acres in the formation, far surpassing second-place Newfield Exploration Co. with 170,000 net acres, according to calculations by NGI’s Shale Daily.

At ExxonMobil’s annual investor day conference held earlier this month in New York City, CEO Rex Tillerson said the Woodford and Bakken shales together were the “fastest growing liquids-rich plays” in the portfolio. The drill well inventory in 2012 in three plays — the Woodford, Permian and Bakken — “nearly doubled year/year to 11,000 drillable locations,” he said.

“The largest increase is in the Ardmore Basin Woodford Shale plays of southern Oklahoma, where our position increased to more than 270,000 acres due in part to a strategic acquisition that added almost 60,000 acres,” Tillerson said. Last year ExxonMobil scooped up Chesapeake Energy Corp.’s Texoma Woodford property for $590 million cash (see Shale Daily, April 10, 2012). The leasehold included included acreage in Oklahoma’s Bryan, Carter, Johnston and Marshall counties, and at the time the acreage was producing 25 MMcfe/d net.

The company has a dozen rigs targeting natural gas in the Ardmore Basin’s Woodford Shale, according to SmithBits data — five in Carter County, four in Marshall County, two in Johnston County and one in Love County.

“With 12 drilling rigs running, this is our most active unconventional play,” Tillerson said earlier this month. “In 2012, we progressed delineation of the Woodford, performed spacing test and began pad development across the core area of the acreage. We also successfully completed the first test of both the Marietta Basin to the Southwest and the overlying Caney Shale of the Ardmore Basin.

“The results of both drilling and acquisitions additions have now increased the Ardmore’s total resource estimate to more than 0.5 billion boe, or more than doubled the 600 million boe we shared with you at this time last year,” the CEO told analysts. “This has the potential to generate deep production of more than 150,000 boe/d, and we continue to evaluate further upside in the Woodford and other formations. Ardmore production more than doubled in 2012 to roughly 19,000 boe/d, an increase enabled by the expanding, gathering and processing infrastructure in the region.”

The sale is the “culmination of the company’s efforts to maximize the value of our Woodford Shale gas assets. The transaction is also structured to preserve our rights in the relatively undeveloped Caney and Upper Sycamore formations in the Tishomingo Field. We believe these intervals represent a promising opportunity to develop new oil reserves and production, in an area in which we have a successful operating history.”

BNK has a drilling rig mobilizing for the next planned Caney well, the Barnes 6-3H. In January the company had reported a 21-day initial production rate from the Barnes 6-2H well of 180 boe/d, weighted 70% to oil (see Shale Daily, Jan. 16). One rig contracted for two wells with the option for two more.

“This project is considered to have high (and growing) potential future recovery, with projected reserves expected to increase as more wells are drilled and infill drilling proves up,” BNK noted. “In addition, improvements in production rates from refined completion techniques can add to further upside potential. Tishomingo remains BNK’s biggest U.S. prospect for low risk future growth, stability and profitability.”