ExxonMobil Corp. has secured more than 1.7 million acres to explore offshore Egypt, helping to build its natural gas and oil portfolio in the Eastern Mediterranean.

The acquisition includes acreage in the 1.2 million North Marakia Offshore block, which is five miles offshore Egypt’s northern coast in the Herodotus Basin. The remaining 543,000 acres is in the North East El Amriya Offshore Block in the Nile Delta.

“These awards strengthen our exploration portfolio in the Eastern Mediterranean,” said ExxonMobil’s Mike Cousins, senior vice president of exploration and new ventures. “We look forward to working with the government and deploying our proven expertise and advanced technology.”

ExxonMobil would operate both blocks and hold 100% interest. Operations, including acquisition of seismic data, are scheduled to begin in 2020.

“ExxonMobil has been a partner in Egypt’s growth for more than 115 years, and these awards reaffirm our commitment to pursuing high-quality opportunities in the country,” said ExxonMobil Egypt Chairman Hesham Elamroussy.

The awards add upstream interests to ExxonMobil’s long-standing downstream presence in Egypt, where it has been a fuels, lubricants and specialties marketer since 1902.

Last February, ExxonMobil and partner Qatar Petroleum reported a huge natural gas discovery offshore Cyprus in the Eastern Mediterranean that could hold 5-7 Tcf. The gas-bearing reservoir of 436 feet was discovered at the Glaucus-1 well in Block 10. The well was drilled to a depth of 13,780 feet (4,200 meters) in 6,769 feet (2,063 meters) of water.

The Glaucus well maintained the Eastern Mediterranean’s position as one of the world’s top exploration hotspots, Wood Mackenzie said. ExxonMobil and Qatar have wanted to use the gas reserves to feed a two-train liquefied natural gas (LNG) plant, but there could be limited space in the local markets, the consultancy said at the time.

Eni SpA and Total SA made a similar giant gas discovery in the neighboring block in 2018, and a joint development could provide enough gas to support a greenfield LNG development, Wood Mackenzie said. A partnership also would echo collaboration at ExxonMobil and Eni’s LNG developments in Mozambique; the partners sanctioned Coral South LNG in 2018.

Meanwhile, Houston-based Noble Energy Inc. is on the verge of ramping up volumes from the initial phase of Leviathan, another massive gas reservoir southeast of Cyprus off the Israeli coast. Leviathan is estimated to contain 4.5 Tcf.

Noble in November said its two mega gas projects offshore Israel gained steam during the third quarter, with the Tamar field reaching a milestone of 2 Tcf and first volumes from the Leviathan field set to begin by the end of 2019.

Noble is leading development for the largest energy project in Israel’s history, with the first phase of the estimated 22 Tcf Leviathan development to include four subsea wells, each capable of flowing more than 300 MMcf/d. 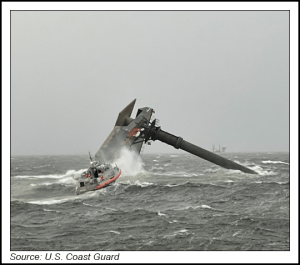 Two more people have been found dead offshore Louisiana following the capsize of a Seacor Marine liftboat last week, bringing the death toll to four. The U.S. Coast Guard (USCG) said Friday night that the bodies were recovered earlier in the day by divers contracted by Seacor. The divers work for Donjon Marine Co. The…