At a time when oil prices are surging and global supply is struggling to meet fast recovering energy demand, ExxonMobil and its partners have added 220,000 b/d oil production capacity to their offshore Guyana project. 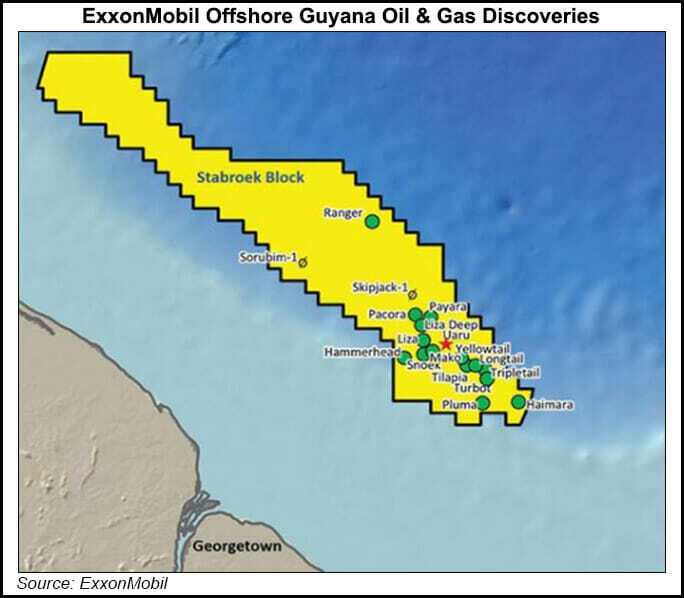 Production has begun at the second offshore oil development at the prolific Stabroek block. The Liza Phase 2 development is expected to increase total production capacity to more than 340,000 b/d. The first offshore project, Liza Phase 1, began production in late 2019.

“We are collaborating closely with the government and people of Guyana to develop this world-class resource responsibly, helping to meet the world’s energy needs and delivering enhanced value for all stakeholders at a record pace and well ahead of the industry average,” said ExxonMobil’s Liam Mallon, president of Upstream Oil and Gas.

Production at the Liza Unity floating, production, storage and offloading (FPSO) vessel should reach its target of 220,000 b/d later this year, ExxonMobil said.

The Stabroek block’s recoverable resource base is estimated at more than 10 billion boe, and new discoveries are added each year. In January, ExxonMobil said it added two oil and natural gas discoveries offshore Guyana.

ExxonMobil sees four FPSOs with total capacity of 800,000 b/d in operation on the Stabroek block by the end of 2025. Payara, the third project, is expected to produce 220,000 b/d of oil with a vessel currently under construction. The field development plan and application for environmental authorization for the Yellowtail project, the fourth project, have been submitted for government and regulatory approval.

ExxonMobil has touted the project as key to economic development in Guyana. The company said it has 3,500 Guyanese citizens employed in its activities in the country.