ExxonMobil Corp., which last week said it would move more global investment to the U.S. onshore, on Monday unveiled a $20 billion plan to expand manufacturing capacity along the Gulf Coast, fueled by domestic natural gas and oil. 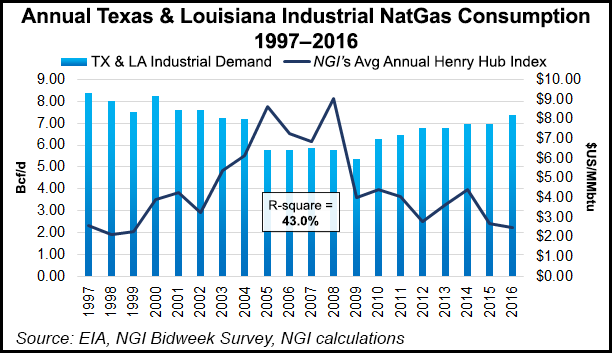 CEO Darren Woods announced the “Growing the Gulf” initiative during a keynote address at CERAWeek by IHS Markit in Houston. The Texas and Louisiana projects, at 11 proposed and existing sites, would involve investments over a 10-year period, generating thousands of high-paying jobs and increase economic activity, he said.

“The United States is a leading producer of oil and natural gas, which is incentivizing U.S. manufacturing to invest and grow,” Woods said. “We are using new, abundant domestic energy supplies to provide products to the world at a competitive advantage resulting from lower costs and abundant raw materials. In this way, an upstream technology breakthrough has led to a downstream manufacturing renaissance.”

The initiative by the Irving, TX-based supermajor follows a push that began in 2013 to expand its petrochemical and refining base along the Gulf Coast. The continued infusion of capital involves new and and expanded refining and petrochemical projects to build manufacturing and export capacity, the CEO said.

According to the American Chemistry Council, chemical manufacturing accounted for 14% of overall domestic exports in 2015. Exports of specific chemicals linked to shale gas are projected to reach $123 billion by 2030. Most of ExxonMobil’s new chemical capacity investments would target export markets in Asia and elsewhere.

“These projects are export machines, generating products that high-growth nations need to support larger populations with higher standards of living,” Woods said. “Those overseas markets are the motivation behind our investments. The supply is here; the demand is there. We want to keep connecting those dots.”

The Gulf Coast expansions would provide long-term economic benefits to the region, creating direct employment opportunities and “multiplier effects” of the company’s investments, he said.

“Importantly, ‘Growing the Gulf’ also creates jobs and lasting economic benefits for the communities where they’re located. All told, we expect these 11 projects to create over 45,000 jobs. Many of these are high-skilled, high-paying jobs averaging about $100,000 a year. And these jobs will have a multiplier effect, creating many more jobs in the communities that service these new investments.”

During the annual investor day conference in New York City earlier this month, Woods outlined a go-forward strategy that involves directing more funds to U.S. unconventionals, i.e., short-cycle plays where activity may be turned up or down as commodity prices fluctuate.

ExxonMobil, the No. 1 North American natural gas producer, has steadily been building its unconventional oil investments, particularly in the Permian Basin and Bakken Shale. By 2018, domestic onshore drilling is expected to absorb about one-half of the global budget, with output forecast to increase every year on average by 20% through 2020.

ExxonMobil executive Jack Williams, who runs the XTO Energy Inc. exploration subsidiary, said last week the company planned to use its world-scale Gulf Coast refining/petrochemical infrastructure to leverage the natural gas “so we have that full value chain that goes from the acreage position all the way through the market.”

Some of the projects touted by Woods on Monday already are in development, including chemicals, plastics and refining expansions near Houston in Beaumont and in Baton Rouge, LA. ExxonMobil also is adding ethylene lines at its Baytown, TX, refinery and polyethylene lines at the Mont Belvieu, TX, complex.

Last November the company pulled the trigger on another production unit at the Beaumont facility to boost polyethylene capacity by 65%, fueled by unconventional gas. The Beaumont project builds on supply advantages created by the Mont Belvieu expansion, where two similar polyethylene units are being added. Combined, the multi-billion dollar investments would increase the company’s U.S. polyethylene production by 40%, or nearly 2 million metric tons/year, making Texas the largest polyethylene supply point for the company.

ExxonMobil also is expanding the Beaumont refinery’s crude refining capacity, and last year began constructing a unit to increase domestic supply of ultra-low sulfur gasoline and diesel. As well, a potential Gulf Coast petrochemical facility is being eyed with Saudi Arabia’s Saudi Basic Industries Corp., or Sabic. The Corpus Christi area is said to be at the top of the list destination-wise.