ExxonMobil Corp. recorded a $2 billion writedown on the value of U.S. natural gas fields during the final three months of 2016, but the supermajor is remaining focused on the long-term, with a continuing tilt toward increasing oil production and expanding its domestic petrochemicals arm, the investor relations chief said Wednesday. 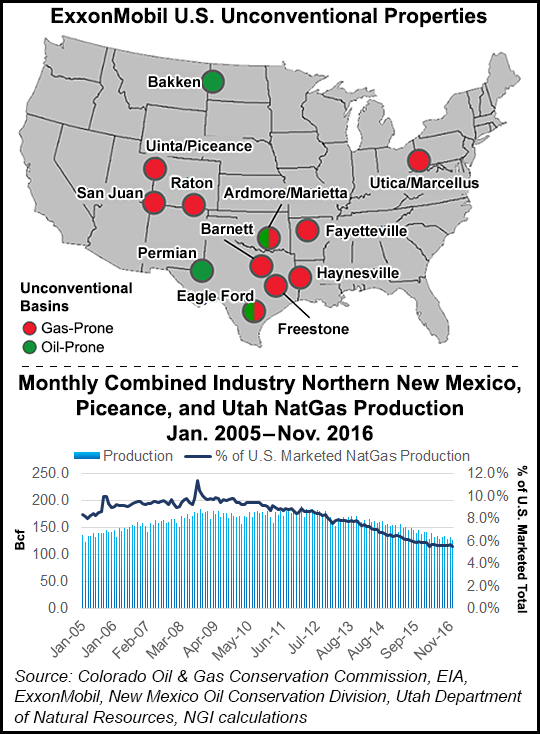 An “asset recoverability review” of all company assets was completed 4Q2016, which resulted in the $2 billion impairment, mostly “related to dry gas operations with undeveloped acreage in the Rocky Mountains region of the U.S.,” investor relations chief Jeff Woodbury said during a wide-ranging conference call.

ExxonMobil in October had warned a reserves charge was likely, mostly related to the U.S. gas assets. Separately, the U.S. Securities and Exchange Commission and New York Attorney General Eric Schneiderman are investigating why there had been no writedowns on the value of any reserves since the price slump began in 2014.

The continued decline in commodity prices last year contributed to a shortfall not only in the value of reserves but in quarterly profits, with ExxonMobil recording the ninth straight quarter of profits declining year/year.

Newly installed CEO Darren Woods, who took over Jan.1, acknowledged that the financial results were hurt by the “prolonged downturn in commodity prices and the impairment charge.” Former CEO Rex W. Tillerson retired after being tapped to serve as secretary of state under President Trump, and Senate confirmation is expected this week.

Despite the decline in profits, ExxonMobil is going to be more aggressive about capital spending this year, rising by around 14% from 2016 to $22 billion from $19.3 billion. The increased spending “does not reflect a year-on-year increase associated with the cost inflation” expected as oilfield services companies raise their rates, Woodbury said. “In fact, the inverse is true, in that the organization continues to look for high-impact capital efficiencies to drive the costs down. It is by and large a function of activity level.

“Certainly as activity continues to build, we will all experience some market pressures, but that doesn’t relieve us of our fundamental objective of maximizing the value proposition. And rest assured that the organization will continue to keep focused on what new solutions are there for us to get to a lower cost outcome? And the organization’s very committed to make sure that we’re capturing those and really leading the cost curve.”

Among other things, more capital is being directed to petrochemical expansions and to the Permian Basin, where 10 rigs now are running in its No. 1 onshore target.

“As a leading oil and gas producer in the United States, we have a strong acreage position and proven operational expertise in unconventional plays,” Woodbury said. Onshore subsidiary XTO Energy Inc.’s production today is more than 700,000 boe/d, mostly natural gas but moving more toward liquids, which now comprise about 38% of output.

Already one of the largest leaseholders in the legacy play, ExxonMobil in mid-January more than doubled its Permian resource potential to about 6 billion boe after striking a deal valued at close to $6.6 billion with the Bass family of Fort Worth, TX. The upfront acquisition cost of $5.6 billion, to be paid in ExxonMobil shares, are adding resource potential of 3.4 billion boe across 250,000 net acres in New Mexico’s Delaware sub-basin. Additional cash payments over time totaling up to $1 billion are contingent on resource development.

Expect activity to increase across the leasehold as the year progresses, Woodbury said. With a contiguous acreage block, all of the laterals are expected to extend at least two miles, he said. The rig count also will be expanded. More details are to be provided at the annual analyst conference in New York City on March 1.

Considering the large writedown against the U.S. gas assets, Woodbury was quizzed about what ExxonMobil wants to do to recover the value of its gas reserves. The largest gas producer in the United States could be key player in the emerging domestic liquefied natural gas (LNG) export trade as a 30% stakeholder with Qatar Petroleum International (70%) in the existing import terminal, Golden Pass Products LLC, near Sabine Pass, TX. The Federal Energy Regulatory Commission in December granted a certificate for a bidirectional pipeline to allow gas exports from the facility. Golden Pass since 2012 has been authorized to export to free-trade agreement countries, but the partners still are awaiting federal authority to export gas worldwide.

ExxonMobil is in no rush to export gas, Woodbury said. With or without exports, a lot of “optionality” exists for the North American gas portfolio including petrochemical expansions.

“Over the long-term, we expect that LNG capacity or demand will continue to grow, in fact, almost something like 250% of today’s LNG capacity. A large part of that growth is primarily driven by Asia. Now, like most commodities, you’re going have periods in which there’s oversupply and periods where there’s insufficient supply. And we do expect that with a number of projects coming on that there are some projects…where there is a period in which we’ll see LNG oversupply…

“That’s the…value proposition” and “we’ve got a very extensive portfolio. And I would tell you that brownfield developments, that is incremental investments to existing operations like Papua New Guinea or even Golden Pass, provide us an economic advantage by lowering the costs, by leveraging the installed investment.” Each LNG project “will be evaluated on their own merit. As you’ve heard us say previously as it relates to LNG projects, we want to lock in a large part of that capacity on long-term contracts and Golden Pass, within the whole portfolio of investment opportunities that we have, we’re pursuing long-term sales contracts. But they’ll all be evaluated on their own merits.”

“The anticipation is that resource will not only meet domestic growth in power generation, but we’ll also look at the utilization of that in our value chain in the chemicals business” in addition to gas exports. “Optionality gives us tremendous amount of flexibility to make sure that we’re maximizing the value proposition,” Woodbury said.

With an eye on expanding capacity on the U.S. Gulf Coast, the chemical business continues to capitalize on its “liquids and gas cracking capabilities, capturing increased specialty and commodity product demand,” he said. “The company is selectively investing to extend its advantage with projects that expand production capacity for ethylene and related products around the world.”

For example, in November ExxonMobil said a production unit would be added to its Beaumont polyethylene plant east of Houston, boosting capacity by 65%, or 650,000 metric tons/year. Underpinned by “advantaged feedstock,” i.e. natural gas, ExxonMobil also is adding ethylene lines in Texas at its Baytown refinery and polyethylene lines at the Mont Belvieu complex.

Woodbury also was asked by analysts for ExxonMobil’s views about President Trump’s agenda, which includes a GOP-backed border tax proposal to adjust taxes by subsidizing exports and taxing imports.

“We will continue to advocate…for free market principles,” Woodbury said. “When it comes down to the important discussion that’s happening in Congress and the current administration around the tax code, we believe the tax code should be globally competitive. It should be predictable, stable, providing investment certainty and not picking winners and losers…We will continue to stay principle based in our view on those matters.”

He also was asked whether ExxonMobil supported lifting trading sanctions against Russia, where the company has significant investments. President Trump has alluded to being in favor of dropping the sanctions.

“With respect to Russia, we will continue to fully comply with the existing sanctions,” Woodbury said. “I’m not going speculate when or if they are fully satisfied and removed in the future.”

The investor relations chief was asked how ExxonMobil’s workforce has been affected by the president’s executive order that temporarily bans migrants from seven Muslim-majority countries and bars entry by refugees into the United States. ExxonMobil’s global operations extend across the Middle East, including Iraq, which is on the list.

“A key aspect, wherever we are around the world including Iraq, is the security of our people and our contractors,” Woodbury said. “We have a very dedicated effort within the organization to ensure that we’re trying to stay in front of potential threats that the organization needs to respond to in order to ensure the safety and security of our assets and people. So I’d rather not talk about specifics, but I will tell you that we’re monitoring the situation very closely.”