Natural gas spot prices at Ventura, IA, skyrocketed to record levels Thursday, hearkening back to the polar vortex conditions of winter 2013/14 and leaving Northern Natural Gas and Northern Border pipelines prepared to take action to maintain balance on their systems. 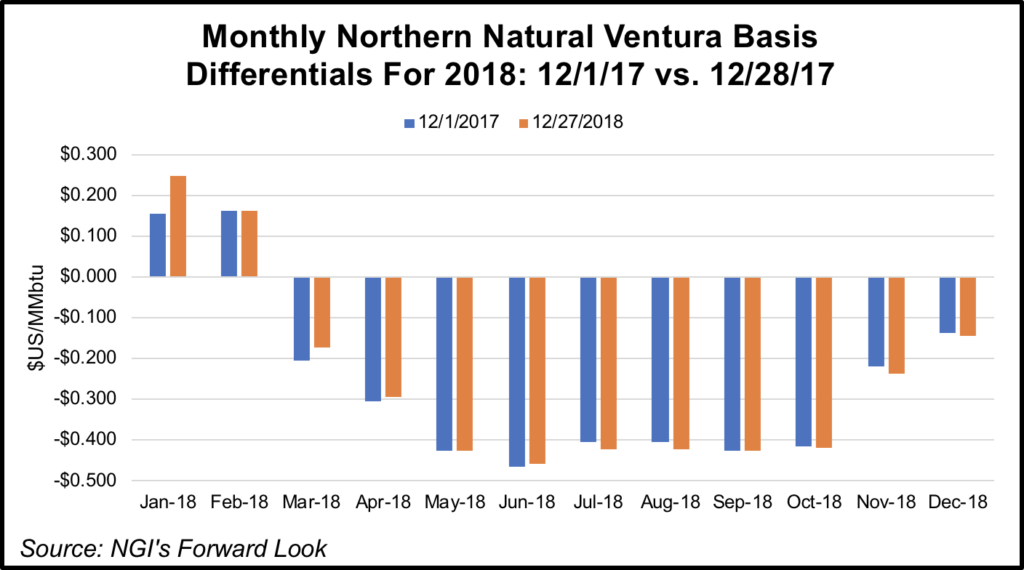 Previously, the highest trade NGI ever recorded for Northern Natural Ventura was $80 on January 27, 2014. Prices that day averaged $55.62, Daily GPI historical data show. The previous record at Northern Border Ventura occurred that same day, when spot prices traded as high as $85 and averaged $49.30.

Northern Natural Gas declared a “Critical Day” for delivery points in Zones ABC, D and EF for Friday’s gas day. The operator said it would penalize shippers up to $113/Dth for taking deliveries in excess of scheduled quantities.

Northern told customers the pipeline “is at risk of experiencing reduced receipts at pipeline interconnects in its Market Area. It is uncertain when this situation will improve. As this situation continues, Northern’s pipeline system integrity will be negatively impacted if deliveries are in excess of receipts.”

Loeffler said Northern’s system is designed to manage peak days like those observed during the ongoing arctic blast. Wednesday’s gas day set a record for market area deliveries for the pipeline, he said.

On Wednesday Northern Border issued a low inventory notice to shippers “due to extreme cold weather conditions” that was scheduled to remain in effect until next week.

“If an interconnect or shipper is underperforming, Northern Border may need to implement unilateral actions including the curtailment of firm service to maintain operational integrity of the company’s system” consistent with its tariffs, the operator said.