Extraction Oil & Gas Inc. said it has agreed to sell more than 25 million shares of its common stock in a private placement for $457 million in gross proceeds, which it will use to replenish its coffers after closing on two separate deals to acquire acreage in the Denver-Julesburg (DJ) Basin in Colorado for $177 million. 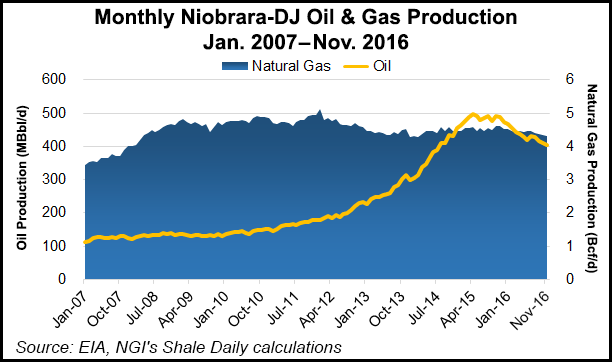 The Denver-based independent exploration and production company, which went public on Nasdaq in October, is focused on oil, natural gas and natural gas liquids (NGL), primarily in the Wattenberg Field area of the DJ Basin. On Monday, the company said the two acquisitions — totaling 16,800 net acres — include scant oil and gas production, but they also contain about 425 net one-mile drilling locations. The sellers were not disclosed.

Extraction said offsetting results from other operators in the area are comparable to some of the best wells in the Wattenberg Field. The company also said it expects the economic breakeven price will be below $45/bbl for West Texas Intermediate Crude across the majority of the acquired acreage.

In a separate statement, the company said it agreed to sell 25,041,095 shares “to selected institutional and accredited investors.” Extraction said the stock sale would generate $442 million in net proceeds after deducting commissions and its own expenses. Of that revenue, $177 million would go toward replenishing the company’s cash, which fell following the DJ Basin acquisitions. Extraction said Credit Suisse, Barclays, Goldman Sachs, Tudor, Pickering Holt & Co. and Wells Fargo acted as placement agents in connection with the offering.

The remaining $265 million in revenue from the stock sale would go toward additional bolt-on leasing operations in and around the area of the DJ Basin acquisitions and for general corporate purposes. Some revenue could also be used to fund additional acquisitions, the company said.

Erickson said the company has budgeted $60-80 million for further organic leasing, and is “currently targeting assets that have demonstrated top-tier well results with a particular focus on more rural areas, oily areas in the [DJ] Basin that are characterized by lower gas-oil ratios and are more oil-prone.

“These oil-prone areas should substantially benefit from the application of our new and evolving enhanced completion techniques.” According to Erickson, those techniques are expected to help the company exit 2017 at a production rate of 65,000-70,000 boe/d.

Last October, Extraction raised $594.1 million after offering 33.3 million shares priced at $19/share. That price was above the initial public offering forecast of $15-18/share.