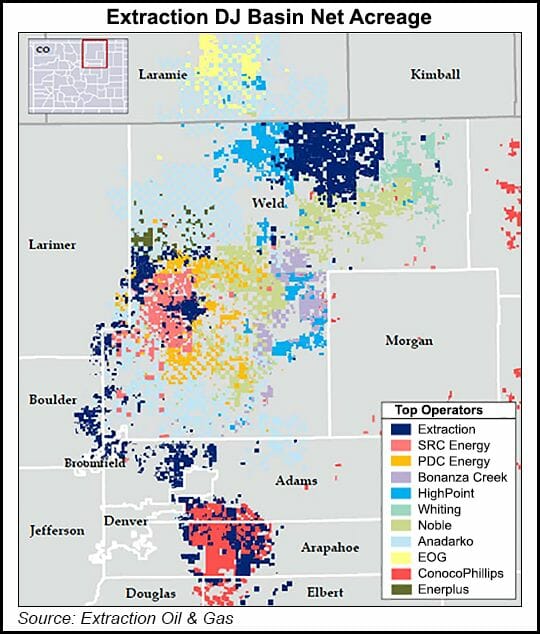 Opponents had argued that Colorado’s forced pooling laws are outdated, but several OGCC commissioners agreed to Denver-based Extraction’s request to drill in the city and county of Broomfield. Broomfield had in recent years moved to restrict drilling, but last summer approved a detailed plan by Extraction.

OGCC Commissioner Howard Boigon lauded Extraction and Broomfield officials for going “above and beyond what was needed to assure public health and safety” in their 1,500-page agreement. Extraction officials said OGCC approval recognizes that the company has satisfied local concerns.

Commissioner Erin Overturf disagreed and cast the lone vote against the pooling request. She said that because of “fundamental problems” with existing state pooling laws, “there are inequities in the bargaining power between operators and the mineral owners.” Overturf concluded that there was insufficient evidence to support Extraction’s plans.

While agreeing that Extraction could have been “more forthright and transparent,” Commissioner Kent Jolly said forced pooling is “an absolute necessity.” Jolly said he didn’t “know of a better method, and if our pooling statute was going to be tweaked, I would feel differently, but we have to deal with how it is now.”

As the OGCC took action, Colorado lawmakers inched closer to final passage of comprehensive oil and gas reform legislation. Senate Bill 181 passed the state Senate and was sent back to the House for reconciliation. The bill calls for reducing the OGCC’s regulatory oversight, among other things, and could be on Gov. Jared Polis’ desk by the end of the week.

In the interim, Extraction officials have assured state regulators and Broomfield officials that they will use the most sophisticated methods for protecting both the public and the environment.

Extraction operates in the Greater Wattenberg Field of the DJ, targeting development of the Codell and Niobrara formations.