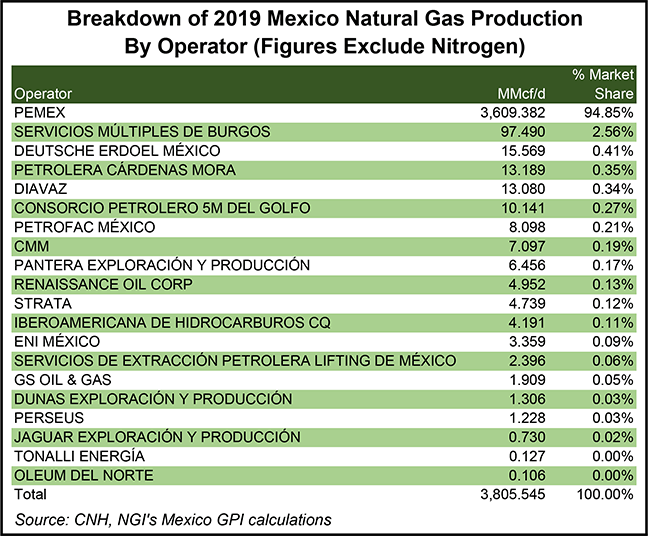 Speaking last week at the Institute of the Americas’ La Jolla Conference, which this year was held virtually, Levy said executives at his exploration and production (E&P) firm see “significant upside” for natural gas in Mexico, with prices set to benefit as a result of the ongoing crisis.

In the United States, onshore activity has plunged due to pricing conditions brought on by the coronavirus pandemic, with recent rig count declines putting the Baker Hughes Co. rig tally at its lowest level since the company began publishing rig count data back in 1987.

Recent forecasting from Genscape Inc. sees natural gas production out of the Permian, Rockies and Bakken regions on track to fall 8% year/year for the upcoming winter season as E&P crude shut-ins curtail associated gas output, bringing a degree of bullishness back to the natural gas price outlook.

Natural gas prices in Mexico are highly correlated to natural gas prices in the United States due to the country’s heavy reliance on gas imports via pipeline from Texas, with transactions typically priced off U.S. benchmarks Henry Hub, Waha and Houston Ship Channel, plus the cost of transportation.

“We see real potential for natural gas to flourish in Mexico in the next 12-18 months,” Levy said. “We think there is still potential to attract capital.”

Jaguar is one the largest private E&Ps in Mexico in terms of permits, with an estimated 1 million acres, CFO David M. Rodriguez said last year. The company has the go-ahead on a four-well exploration drilling campaign targeting four onshore natural gas prospects with combined prospective resources of 44.21 Bcf in the Sureste Basin near Villahermosa, Tabasco state.

With partner Sun God Resources, Jaguar also secured 11 of the 24 gas-rich blocks on offer through the Round 2.2 and Round 2.3 bidding process conducted by the Comisión Nacional de Hidrocarburos (CNH) in 2017.

“We haven’t seen a lot of attention to natural gas,” Levy said, but “the reality is it is very inefficient for Mexico,” given that the country imports around 70% of its gas needs; he added that the amount of associated gas Mexico flares off “is an atrocity.”

He highlighted in particular the Burgos Basin, just south of the U.S. border. “There is a huge amount of potential, and it’s been under drilled.” He said the play makes sense for U.S. E&Ps, because “you don’t have to put any equipment on a boat.”

About 57% of Mexico’s prospective hydrocarbon resources are in unconventional areas, namely the Burgos, Tampico-Misantla and Sabinas-Burro Picachos basins, according to the CNH.

CNH bid rounds 3.2 and 3.3, canceled last year by President Andrés Manuel López Obrador, would have made available both conventional and unconventional gas-rich blocks, mostly in the state of Tamaulipas.

Anyway, “most of the potential in the Burgos is conventional,” Levy said.

All new upstream rounds have been cancelled for now in Mexico, but as a result of the previous administration’s opening of the sector, a total of 22 companies including Jaguar are now producing oil and natural gas in Mexico, with another two expected to join the list in 2020, according to local oil and gas association Amexhi.

“Can you be as efficient in Mexico as in the United States? Yes,” Levy said. “The challenge is how do you offset that against the higher fiscal demand in Mexico. Right now, the natural gas sector does have the advantage of differentiated royalties.”