Natural gas futures, which only last month traded around $6/MMBtu, have steadily lost ground in the new year amid seasonally mild weather and closed near the $3 level on Wednesday. It marked the lowest front-month settlement since 2021. 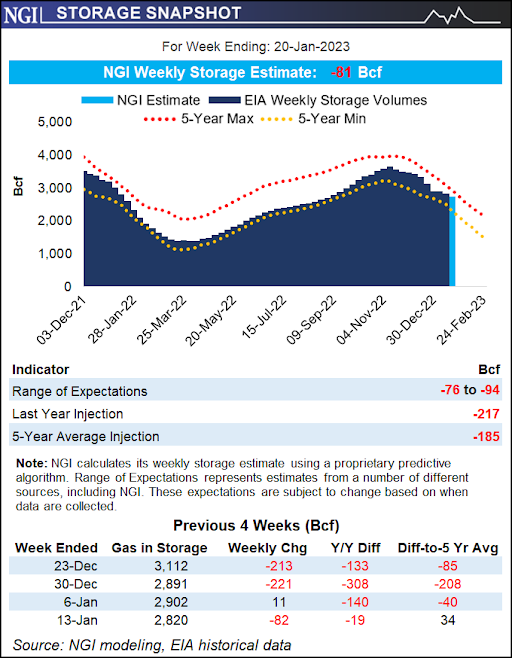 Analysts at Goldman Sachs Group said mild January weather to date, combined with robust production levels, spurred enduring concerns about supply/demand imbalance, pushing buyers to the sidelines and allowing prices to plummet. Restart delays at the Freeport LNG export facility have added to price pressure, they said in a report this week, leaving the near-term outlook notably “less favorable” than at the end of 2022.

BTU Analytics’ Matt Hagerty, senior energy strategist, said robust production that has registered near or above 100 Bcf/d most of this year – around record averages – is bound to ease if Henry Hub pricing remains low. But there are no immediate signs of slowdown in gas-directed plays such as the Haynesville Shale.

DTN weather data show January on track to be among the mildest in 20 years, resulting in relatively modest demand for natural gas to heat homes. At the same time, the Freeport liquefied natural gas export plant in Texas, forced offline in June following a fire, was initially expected to relaunch in November, then December, now late this month at the earliest.

The company hopes to get to 2 Bcf/d of capacity within weeks of a restart, adding meaningfully to the demand side of the equation. But it has faced a series of regulatory delays, leaving analysts skeptical it can ramp up before winter ends.

Without Freeport or mid-winter heating demand, supplies in storage are relatively strong and expected to remain so with Thursday’s Energy Information Administration (EIA) inventory report.

NGI predicted a pull of 81 Bcf.

That compares with a withdrawal of 217 Bcf a year earlier and a five-year average decline of about 185 Bcf.

EIA printed a decrease of 82 Bcf for the week ended Jan. 13. The result compared bearishly to the five-year average draw of 156 Bcf and the year-earlier pull of 203 Bcf. It lowered inventories to 2,820 Bcf but left stocks above the five-year average of 2,786 Bcf. It followed a rare January injection of 11 Bcf reported a week earlier.

Absent sustained cold in the weeks ahead, prices could remain under pressure, analysts at The Schork Report said. “Gas bulls are running out of winter,” they said.

Rubin agreed that bears have a clear advantage at this stage in the season.

“The combination of high production, Freeport offline, swelling surpluses and lack of winter supply adequacy risks points to extended downside risks over the next 30-45 days,” he said.

That noted, NatGasWeather said there is still reason to believe wintry conditions could return in time to at least prop up prices late this month or early next.

“A colder system will sweep across the Midwest Friday to Sunday and will open the door for a series of frigid shots over Canada to advance aggressively into the northern and central U.S. next week, with lows of -20s to 20s, including lows of 10s-20s into northern Texas,” the firm said.

However, the forecaster added, “frosty air is still forecast to moderate and slowly retreat towards the Canadian border Feb. 7-9 for easing national demand.”

Price decliners spanned the country, with hubs in the volatile West leading the downward trend.

Hubs in the Northeast were the exception, with Algonquin Citygate up 53.5 cents to $4.225.

NatGasWeather said stronger heating demand is on the way, with the Midwest freeze that it forecast for this weekend eventually spreading to the East in the final days of January, covering major markets in the Mid-Atlantic and New England with “solidly frosty” air.

For the first several days of February, the firm expects “cool to cold temperatures will cover the western, central and northern U.S.”