U.S. natural gas prices finally retreated Tuesday after the longest stretch of gains in two decades, but warmer forecasts and a tight global market are seen keeping the outlook bullish. 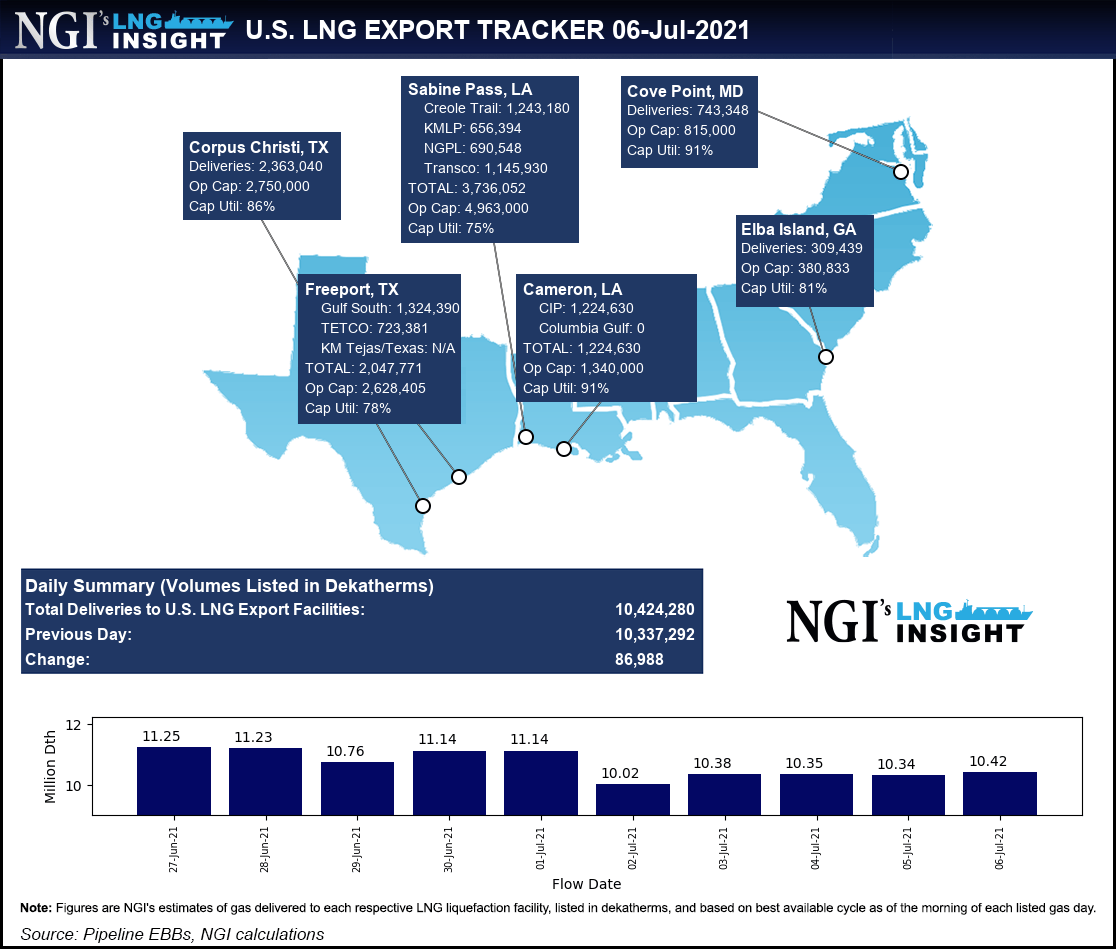 Unrelenting heat from the East to West Coasts, coupled with increasingly strong international demand for liquefied natural gas (LNG), helped the Henry Hub front month contract to nine straight days of gains that ended Friday. The August contract lost 7 cents on Tuesday to close at $3.637. LNG exports, which began from the Lower 48 states in 2016 and have gradually increased since then, played a key role in the recent rally.

“Given current pricing in Europe and Asia, LNG demand should remain strong through the second half of the year, which is going to put increasing pressure on storage and Henry Hub pricing,” he told NGI.

Both European and Asian natural gas prices have been on a tear. The Dutch Title Transfer Facility contract finished nearly 12% higher last week to lead a global rally. Both the Japan Korea Marker (JKM) and Henry Hub benchmarks were up about 6% on the week amid a gas supply crunch.

Dutch futures declined Tuesday after hitting records in the prior session, when the front-month contract shot above $13/MMBtu after Gazprom PJSC elected not to book additional annual pipeline capacity through Ukraine and Poland. European storage inventories are at 48.8% of capacity and additional supplies for the tight market ahead of winter now hinge on whether Gazprom can bring online part of its Nord Stream 2 pipeline by the end of summer.

While European prices fell Tuesday as Norwegian pipeline imports jumped, the outlook remains bullish, especially given that maintenance started on the Yamal Pipeline Tuesday and is scheduled to end Saturday. Nord Stream 1 is also slated for maintenance July 13-22.

European LNG arrivals are expected to remain limited too as Asian prices are still at a premium, diverting cargoes away from the continent. Strong demand in China and hot weather in Japan is driving North Asia LNG prices upward. Spot JKM prices were assessed above $14/MMBtu on Tuesday.

A tight global market has meant a busy summer for U.S. LNG exporters. Feed gas deliveries to export terminals have been well above 10 Bcf/d over much of the last week. Hotter-than-normal temperatures are also forecast for the U.S. Northwest and Northeast over the next week, which is likely to keep prices strong.

How long that strength will last is uncertain. Producers have remained on the sidelines as they maintain capital discipline, said Western LNG CEO Davis Thames.

“This will probably change as these prices become too good to be let alone,” he told NGI. “Hedging will increase and capital will be freed up. In the long run, that’s bad for prices.”

Brent crude prices were also volatile Tuesday even though talks broke down among the Organization of the Petroleum Exporting Countries and its allies, aka OPEC-plus. After touching fresh highs in recent sessions, Brent shed $2.63 to finish at $74.53/bbl. The swings came after the cartel failed to agree on increasing crude output next month despite rising demand as the global economy recovers from the pandemic.

“The unpredictability and the stakes are so high after the recent price jump, that their fragility carried the risk of sudden and unpredictable swings,” said Rystad Energy analyst Louise Dickson. “The cause of the sudden price dip could either be the market reaching a profit taking threshold, the increasing U.S. and Russian pressure for an OPEC-plus deal that will bring some market stability, but also the realization that there is a possibility of an OPEC-plus rebellion that could bring unregulated output back to the market.”

The dispute could keep further upward pressure on LNG prices in Asia, where many contracts are still indexed to oil benchmarks.

Meanwhile, Russian LNG producers last week announced additional maintenance at export terminals that will further limit supplies. Sakhalin Energy Investment Company Ltd. said it would replace two loading arms at its terminal on Sakhalin Island north of Japan. The work is scheduled for July and August as part of the largest planned shutdown of the Sakhalin 2 infrastructure.

Also last week, FERC cleared Cheniere Energy Inc. to introduce gas and commission the fuel gas system on the sixth train at its Sabine Pass LNG export terminal in Louisiana. The sixth train would boost overall production at the terminal to 30 million metric tons per year. Train 6 is expected to enter service by the end of the year.

Freeport LNG Development LP has also requested authorization from the Federal Energy Regulatory Commission to increase the maximum capacity of its export terminal on Quintana Island in Texas to 870 Bcf/year from 782 Bcf/year. The increase, Freeport said, is consistent with the facility’s design capacity.

Under the deal, QP would begin providing Shell with supplies from its Qatargas 1 trains beginning in January for 10 years. Shell would then deliver the cargoes to China. LNG imports are on the rise as the country fuels economic growth and aims to meet ambitious climate goals.