Rising exports and rebounding industrial activity are likely to drive U.S. natural gas demand through 2022,  according to analysts who presented during a webinar hosted Tuesday by Natural Gas Intelligence (NGI) and Independent Commodity Intelligence Services (ICIS). 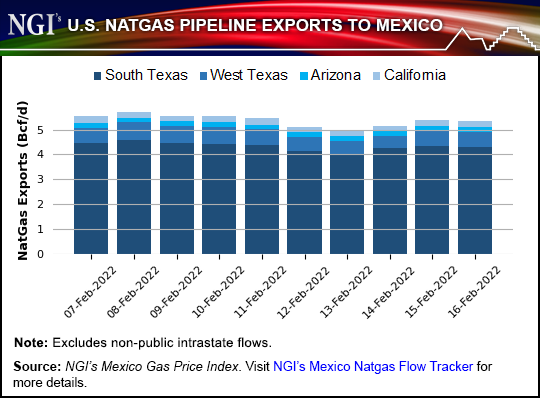 Liquefied natural gas (LNG) exports to Europe and Asia, along with pipeline exports to Mexico, are on track to continue their current growth trend, said NGI’s Patrick Rau, director of Strategy and Research.

Rau was joined on the webinar by NGI’s Leticia Gonzales, Price and Markets editor, along with ICIS’s Ruth Liao, editor of LNG Americas, and Tom Marzec-Manser, head of Gas Analytics. More than 450 viewers participated in the event (replay available).

The hot summer months in particular should see Mexican demand for U.S. gas via pipeline rising, panelists said. Exports to Mexico in the summer of 2021 easily surpassed the levels of the prior year.

The combination of LNG and Mexican demand would put added pressure on South Central region supplies. This could apply upward pressure on Henry Hub prices as well as at hubs in Texas.

Nonetheless, CFE has signaled intentions to continue partnering with the private sector in building out new natural gas infrastructure.

An accelerating U.S. economy and manufacturing activity needed to support it this year could generate year/year industrial demand growth in excess of 6% in 2020. That would mark the second-highest annual growth rate of this century, said Rau.

The U.S. economy advanced at a 6.9% annual rate in the fourth quarter, according to federal data, culminating the strongest year of growth in nearly four decades. In a year of surging demand across industries following the depths of the pandemic, the economy grew 5.5% for all of 2021 and is expected to continue expanding this year.

“We think industrial demand is going to go gangbusters this year,” Rau said.

He and other panelists forecast strong LNG demand this year, as countries throughout Europe clamor for American fuel to refill depleted stockpiles on the continent. China, home to the world’s second-largest economy after the United States, also continues to call for American gas amid that country’s recovery from the pandemic.

Liao noted that U.S. exports hit record levels this winter; they are expected to remain elevated this year and could once again set records next winter. American LNG capacity ramped up last year and is climbing further this year – likely making the United States the largest exporter of LNG in 2022. Australia and other big exporters are expected to level off on shipments of the super-chilled fuel in part because of anticipated maintenance work on aging infrastructure.

What’s more, already precarious pipeline gas flows from Russia to Europe this winter grew lighter in recent weeks amid political strife and regulatory pushback in Germany against Russia’s new Nord Stream 2 (NS2) pipeline. NS2 is completed but not yet delivering gas to Europe.

Russia this month escalated its threats of invading Ukraine. Though the intensity of the conflict remained equivocal Tuesday, U.S. and European authorities have promised punishing new sanctions on Russia if it attacks its neighbor. Such blowback could further delay NS2 and slow existing gas flows to Europe, Marzec-Manser said.

A Russia-Ukraine clash could further boost demand for U.S. LNG across Europe, he said, and cause another surge in gas prices there. “The storage situation in Europe has been pretty bleak since about April of last year,” Marzec-Manser said. As winter arrived in late 2021, “prices went absolutely ballistic.”

About 30% of gas consumed in Europe this winter has come from Russia, Marzec-Manser told the audience. That is already down from more than 35% in previous years. War-induced constraints could drag Russia’s share down further and cause pressing supply worries in Europe and inject immediate demand increases for U.S. LNG.

Gonzales noted that production in the Permian Basin of Texas and New Mexico began to recover last year – following pandemic interruptions in 2021. Output is projected to steadily increase this year to meet mounting demand in the region. “The supply is coming,” she said.

She noted, however, that freezing conditions in Texas earlier this month, while brief, reminded of the potential for production interruptions and surges in demand that can jolt prices – as was the case in February 2021 during Winter Storm Uri.

“There are some jitters in the market” any time extreme cold weather conditions impact Texas, Gonzales said.

That said, with U.S. oil prices recently topping $90/bbl and reaching seven-year highs amid robust global demand, crude production is expected to rise this year. Along with that, associated gas output would climb, adding to supplies, Rau said.

He estimated that total gas output this year could increase 3.6% from 2021 levels. He added, however, that Wall Street estimates span a wide range from several wildcards. They include severe weather potential to an intensifying trend among large, public producers to shift investments away from fossil fuels and toward renewable energy.

As such, Rau said supply/demand balances are difficult to predict and prices could prove choppy in 2022 – as they have early in the new year.

“Volatility at the Henry Hub continues to increase,” he said.