Natural gas liquids (NGL) account for a significant portion of what many international organizations refer to as “oil production” from the United States, according to analysts from the Brookings Institution. 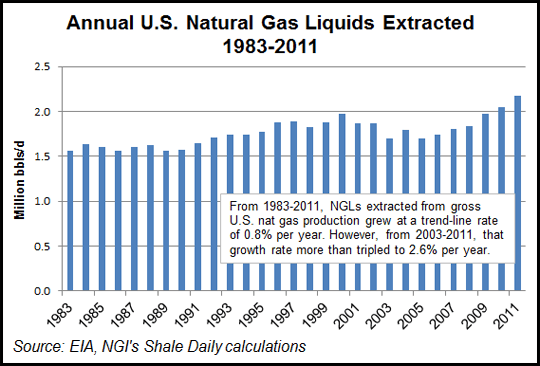 “One important aspect of the U.S. unconventional oil and gas ‘revolution’ has gone relatively unnoticed: the rapid increase in the production of NGL,” Ebinger and Avasarala said.

The analysts cited data from the U.S. Energy Information Administration (EIA), which found that domestic NGL production had increased from just over 1.7 million b/d in 2005 to nearly 2.5 million b/d in October 2012, a 47% increase, and now accounts for around 20% of the global market. They project that NGLs will account for about 25% — nearly 3 million b/d — of U.S. liquids supply by 2025.

“While such commodities do not attract the attention that is shown to crude oil, gasoline or natural gas, they are a critical component of the industrial sector’s ability to take advantage of the U.S. hydrocarbon resurgence, and will play a large role in the country’s ambitions for energy ‘self-sufficiency.'”

Ebinger and Avasarala said the U.S. exports of NGLs were occurring because of an excess domestic supply and weak demand from the petrochemical sector. They said exports would become increasingly important to maintaining domestic NGL and, by association, dry gas production.

Data from Veresen Inc. and Energy Policy Research Foundation Inc., which was included in the Brookings report, showed the various shale plays in the U.S. differ in terms of gallons of NGL per Mcf (GPM). The Bakken Shale led the way with 6-12 GPM, but three shale plays — the Eagle Ford, Niobrara and the Marcellus/Utica — had 4-9 GPM. The Green River formation had 4-6 GPM, followed by the Barnett Shale with 2.5-3.5 GPM.

Ebinger and Avasarala said that although some of the major, vertically-integrated oil companies dabble in NGLs, the market “is dominated by a number of less-familiar companies, which own much of the processing, fractionation, pipeline and storage capacity.” They said those companies include Enterprise Product Partners LP, DCP Midstream LLC, Targa Resources Partners, Williams and Oneok Partners LP.

“The NGL market is facing a glut of supply in the coming years,” the analysts said. “Although traditional NGL economics would suggest that a prolonged period of low NGL prices would result in a shortage of ethane, improvements in the efficiency of shale gas production have maintained gas and liquids production despite a diversion of rigs to crude oil plays.

“With large NGL volumes expected to enter the market in the coming years, it is more likely that demand will not be able to keep pace with supply rather than the other way around.”

The analysts also point out that NGL infrastructure, both midstream and downstream, has not been able to keep pace with the increase in supply. They cite figures from the Interstate Natural Gas Association of America, a midstream trade association, which estimated that energy companies need to spend at least $7.8 billion on pipelines by 2016.

“Companies in the midstream sector are responding to market signals of low prices and supply bottlenecks [by] investing in the construction of a host of pipelines that will transport NGL to market,” the analysts said. But they warned that adding new pipeline capacity will not be easy.

“Right-of-way issues and landowner rights pose potential obstacles that can slow down the construction process,” the analysts said. “Nowhere is this clearer than in the Northeast. Pipeline investments are particularly important for the projected surge in NGL production from the Marcellus and Utica. With enough investment in pipelines and petrochemical production capacity, the Northeast states will no longer have to send their NGL to the Gulf Coast for consumption or export.”

“Although exports have been increasing…export capacity is still constrained by a ‘lack of suitably equipped terminals,'” the analysts said, citing research conducted by RBN Energy LLC and projects under way by Enterprise and Targa in Mont Belvieu, TX, and Sunoco Logistics Partners LP in Marcus Hook, PA (see Shale Daily, Sept. 28, 2012; Jan. 27, 2012).

“Exporting NGL will provide producers an incentive to maintain production for both NGL and, in turn, dry natural gas,” the analysts said. “Further, many investors see exports as a critical component of smoothing the price volatility that characterizes the NGL market.

“More important than the current surge in investments in U.S. manufacturing is the assurance of a predictable supply of NGL, something provided by increased NGL export.”