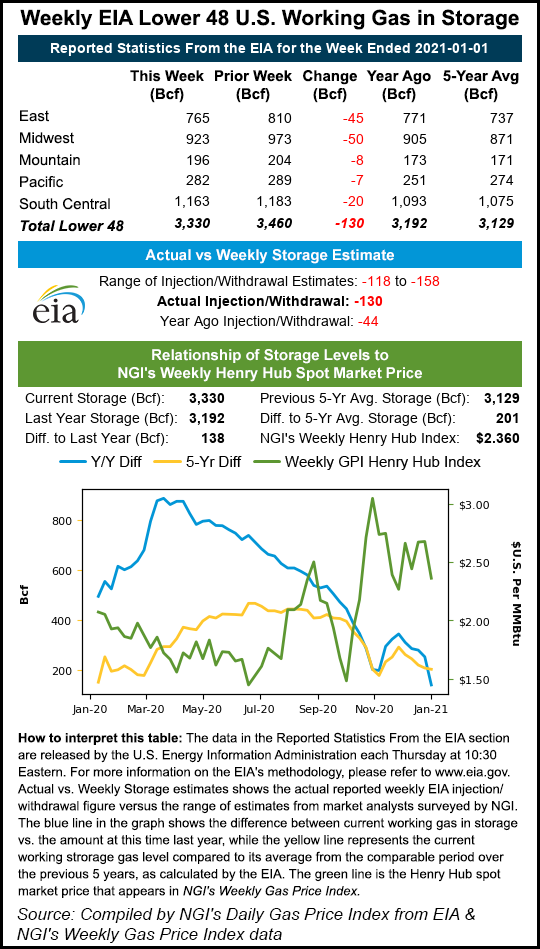 The February Nymex gas futures contract settled at $2.729, up 1.3 cents day/day. The prompt month has so far advanced each trading day of 2021 after finishing last year on a high note. March climbed seven-tenths of a cent to $2.691.

NatGasWeather said next week’s weather pattern “is quite bearish” with heating-degree days forecasted to be “a hefty 30-35 warmer than normal.” Overall, the firm added, both domestic and European models over the past few days trended warmer for next week and the following weekend.

Still, markets brushed off the bearish near-term outlook and focused instead on the potential for widespread blasts of cold that could arrive by Jan. 18 and last for several days.

“The onus is on cold coming through Jan. 18-22 when considering the past two and a half months have been much warmer than normal and since forecasts of colder weather patterns have failed miserably in almost all instances the past two winters,” NatGasWeather said.

On the domestic front, the U.S. Energy Information Administration (EIA) reported a withdrawal of 130 Bcf for the week ended Jan. 1. It marked a steep pull to kick off the year, but it fell short of the mid-130s Bcf decrease forecasted in major polls. NGI modeled a 135 Bcf withdrawal.

Futures were essentially flat before the 10:30 a.m. EIA release and they hovered in a narrow range throughout most of the day. Observers said that, while failing to exceed expectations, the result nevertheless marked a solid decline and far exceeded the year-earlier withdrawal of 44 Bcf.

Bespoke Weather Services said supply/demand balances are likely to tighten if domestic temperatures do shift colder this month. “We do think the balance will tighten somewhat as we move forward, but it is the weather that will be the ultimate driver” the remainder of January.

The latest withdrawal reduced inventories to 3,330 Bcf, though stockpiles were still above the year-earlier level of 3,192 Bcf and above the five-year average of 3,129 Bcf.

Gas futures climbed alongside oil prices and broader stock markets Thursday despite a mob of President Trump supporters breaking into the U.S. Capitol late Wednesday. Four people died during the rampage. The incident, incited by Trump, galvanized several lawmakers and industry trade groups on Thursday to call for the president to step down.

However, the Desk’s John Sodergreen, writing on the company’s online energy platform Enelyst, said traders are instead looking ahead to a Biden administration and increasing expectations for vaccines to gradually bring an end to the coronavirus pandemic.

The vaccine rollout has ebbed and flowed, and it could take several months to inoculate enough people to end the pandemic. However, public health officials have consistently expressed confidence in widespread vaccinations by early summer. That would enable more businesses to fully open, economic growth to accelerate and energy demand to increase.

“Vaccine distribution is seeing some hiccups in the U.S. and elsewhere, but it is happening at a brisk pace,” Sodergreen said. “Markets seem much more interested in this train than the crazy train about to vacate DC…The year of fear and chaos, of shutdowns and shut-ins, will soon fundamentally shift to a swelling story of mass vaccinations, mass reopening and growth, normalcy and stability, and an uptick in demand (for everything) on a global scale.”

Cash gas prices advanced modestly across the country amid winter temperatures that were generally above historic averages but cold enough to get furnaces cranking.

“Demand will increase this weekend as lows of 0s to 30s expand to cover all but the far southern United States,” NatGasWeather said, though temperatures are expected to rise next week across much of the Lower 48.

Prices climbed incrementally throughout the nation’s midsection on Thursday. El Paso Permian advanced 10.0 cents day/day to average $2.630, while Katy picked up 5.5 cents to $2.730, and Chicago Citygate gained 6.0 cents to $2.640.

Prices jumped the most in the Northeast, led by Algonquin Citygate, which rose 33.0 cents to $3.320.

Wood Mackenzie analysts noted that, while weather is the primary driver of prices in winter, other fundamentals are supporting a bullish long-term outlook.

“Production is still down significantly year over year, despite a larger-than-expected recovery in November” 2020 that held up through the end of the year, the analysts said. “The recent rise in global LNG prices is providing more than enough support to keep U.S. export economics squarely in the money through the year based on current spreads” between Henry Hub and Asian benchmarks. “And exports to Mexico have rebounded off of recent lows with flows breaking above 5.8 Bcf/d” on Thursday.