No groundhogs were needed to convince natural gas traders that Old Man Winter was planning to stick around longer across the United States. A biting February forecast combined with strong storage withdrawals, potential supply disruptions and robust export demand to send March Nymex natural gas futures ballooning to $5.501/MMBtu, up 75.0 cents on the day. April surged 47.1 cents to $5.044. 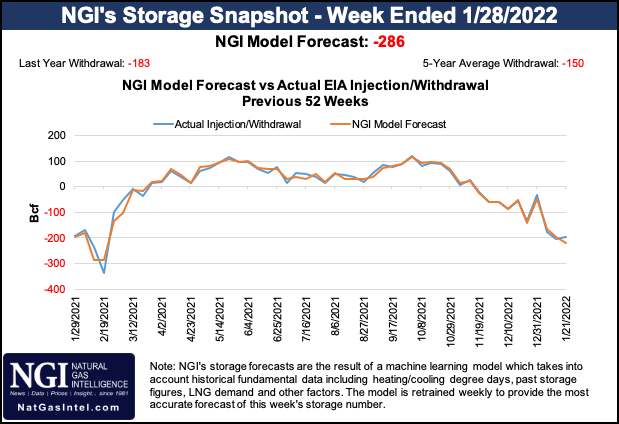 Spot gas action was similarly volatile as intense heating demand was seen permeating the eastern half of the country for the next several days as temperatures plunge. Cash jumped more than $1.00 at most locations, with NGI’s Spot Gas National Avg. up $1.315 to $7.440.

The multi-day stretch of bitter cold arrived in the central United States midweek, ushering in heavy snow that is expected to extend from the southern Rockies to northern New England when all is said and done, according to the National Weather Service. Heavy ice accumulation was likely from Texas to Pennsylvania.

Although the approaching one-year anniversary of Winter Storm Uri may be causing some jitters in Texas, Bespoke Weather Services said the threat of widespread power outages amid the deep freeze was not to blame for Wednesday’s monstrous rally.

Instead, it’s “the fact that we are seriously drawing down storage levels,” Bespoke said. “And more cold will only add to this issue, making it tougher to refill to comfortable levels by the end of injection season.”

Government inventory reports have shown a steepening drawdown in recent weeks as a result of frigid weather through most of January. The Energy Information Administration (EIA), set to release its next report at 10:30 a.m. ET Thursday, has reported at least a 200 Bcf withdrawal in each of the last three weeks. Another 200 Bcf-plus pull is expected for Thursday.

A Bloomberg survey of eight analysts produced a range of estimates from 263 Bcf to 292 Bcf, with a median of 280 Bcf. A Wall Street Journal survey had the same range of projections and landed at an average decline of 267 Bcf. A Reuters poll was wider with a low estimate of 232 Bcf, a high of 297 Bcf and a median of 277 Bcf. NGI modeled a 286 Bcf pull.

This would easily crush the 183 Bcf withdrawal recorded by the EIA in the same week last year and the five-year average of 150 Bcf.

Meanwhile, operators eying the potential for explosive cash price prints amid the heightened demand in the South Central region were injecting gas to increase supplies available to sell into potentially higher prices later this week.

Why Are There Short-Term Spot Buys?

Bone-chilling weather and rampant demand aside, Bespoke said Wednesday’s rally also had the makings of a short squeeze in play against traders who were short the March-April spread.

The firm said “the March contract was up a ton more than any other contract on the board, to a degree that looks a little odd.” Bespoke noted that “it is very difficult to have concerns about enough cold in March to risk a major cash blowup, unless we had risk of running out of gas, which we do not have.”

While more cold temperatures would in fact be bullish, according to Bespoke, any support for March would carry into April – and the rest of Calendar Year 2022. The question may be how difficult it is to refill storage to acceptable levels by the end of this year’s injection season.

Spot gas prices were up across the country, with stout premiums in place for Thursday’s gas delivery amid an Arctic front taking aim at the central United States.

AccuWeather forecasters said the polar blast would dive into Texas on Wednesday night and Thursday. The storm then is expected to combine with a surge of moisture from the Gulf of Mexico and bring drenching rainfall to the Mississippi Valley. Through Friday, steady rainfall was expected to spread from East Texas to southern West Virginia, with the potential for ice forming overnight.

During Wednesday night and Thursday, ice accumulations 0.10-0.25 of an inch were likely from Northeast Texas to central New York. Higher amounts up to a half-inch of ice could occur from southeastern Oklahoma to northwestern Pennsylvania.

AccuWeather said the biting conditions could challenge the Texas power grid, but the magnitude of the cold blast would not be nearly as severe as last February’s Winter Storm Uri. This shot of cold air was forecast to clear after three days, while Uri lasted a week, forecasters said.

The Electric Reliability Council of Texas, which serves 90% of the state, said it was using “all the tools available to manage the grid effectively during this winter weather.” Interim CEO Brad Jones said the grid operator would “deploy all the resources and aggressively implement the tools available to us” to manage the grid reliably during the weather event.

“We will continue coordinating closely with the Texas Division of Emergency Management, the Public Utility Commission, the Railroad Commission and elected officials — as well as electric generators and transmission and distribution utilities — to keep Texans informed throughout the week,” he said.

Jones cautioned that while grid conditions “remain strong with enough capacity, our weather forecasts show there is potential for significant frozen precipitation behind this week’s cold front. With frozen precipitation, there is always a chance for local outages caused by things like ice on wires or fallen tree limbs.”

With demand accelerating ahead of the storm, spot gas prices in East Texas rallied at some locations. Tolar Hub soared $6.310 to average $11.650 for Thursday’s gas day. South Texas prices were in the $6.00 range, while West Texas prices climbed close to $8.00.

In the notice, CIG acknowledged that the event may impact the ability of no-notice transportation customers to withdraw gas from Tuesday through Thursday (Feb. 1-3) as cold weather forecasts for delivery areas increased demand to the system.

“Since past 30-day max withdrawals from the facility were only slightly more than 20 MMcf, actual cuts to withdrawals are unlikely, or will be minimal at most,” Wood Mackenzie analyst Quinn Schulz said.