Natural gas futures were sluggish to start the week as weather models came into agreement in showing a lack of continued frigid weather into early February. Though production remains off recent highs and export demand continues to be near record levels, the February Nymex gas futures contract on Monday settled at $4.027/MMBtu, up only 2.8 cents from Friday’s close. 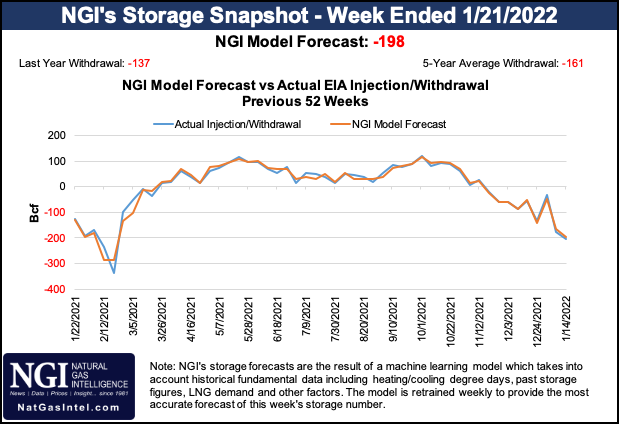 Spot gas prices put up more notable gains with the strongest gas demand on tap this week. However, hefty losses in the Northeast brought down NGI’s Spot Gas National Avg. 33.0 cents to $5.660.

Though futures finished the day in the green, trading behavior was “rather odd,” according to Bespoke Weather Services. The February Nymex contract opened Monday’s session several cents lower as the latest weather models failed to provide any clear indication that the biting cold in store for this week would carry over into February.

The forecaster pointed out that despite the lack of polar air in the United States expected early next month, there still is “plenty of cold that will be available up in Canada, so small changes in the upper-level pattern can mean larger changes in the overall demand pattern.” It also noted that production remains well off highs, with fresh cuts to output possible given the widespread freeze this week.

EBW Analytics Group said the recent bouts of cold already have trimmed production to near month-to-date lows. Some estimates pointed to output declining by another 3-4 Bcf/day-plus this week.

In addition to the freeze-offs, the cold is expected to generate the strongest gas demand of the winter so far, topping the past week’s surge in the process. At the same time, the chilly temperatures are likely to cause a steep drawdown in storage inventories. EBW said the next three storage reports could result in a more than 700 Bcf pull from stocks.

As of Jan. 14, total working gas in storage was 2,810 Bcf, which is 226 Bcf below year-earlier levels and 33 Bcf above the five-year average, according to the Energy Information Administration (EIA).

Ahead of this week’s EIA report, NGI is projecting a pull of 198 Bcf, which compares with last year’s 137 Bcf withdrawal in the similar week and the 161 Bcf five-year average draw.

“Volatility is high ahead of February final settlement this week, but a reversal in sentiment is possible over the next seven to 10 days as peak January cold falls off and bullish catalysts begin to unwind,” Rubin said.

Of course, there’s still cold temperatures and strong national demand to play out this week, according to NatGasWeather. The forecaster said a series of frigid blasts were expected to sweep across the Midwest and Northeast, sending overnight temperatures from the minus 20s to the 20s. The polar air was forecast to make its way into the South for a second time, pulling lows into the 20s and 30s for portions of Texas, the South and Southeast.

“Demand this week will be the strongest so far this winter and will result in next week’s draw likely printing over 250 Bcf,” NatGasWeather.

Meanwhile, LNG demand continues to ebb and flow, but remains not far off all-time highs. On Monday, feed gas deliveries to U.S. terminals hit 13.28 Dth/d, up slightly above 1 Bcf week/week.

Wood Mackenzie in a note said pipeline flows on TransCameron Pipeline hit a high of 77,361 MMBtu/d on Monday. The pipeline feeds into the Calcasieu Pass LNG export terminal, which continues the commissioning process ahead of full operations.

Coming off the second warmest December on record, January could finish as one of the coldest. Old Man Winter appears to have settled in for a longer stay, with only a brief break after last week’s cold blast before more bone-chilling weather arrives across the country.

AccuWeather said the combination of a southward dip in the jet stream that is unleashing cold air into the United States, and a series of disturbances from the northern Pacific Ocean, would allow at least one fast-moving storm with snow to target portions of the Lower 48 into Tuesday night. The first of the Alberta clippers hit the Upper Midwest over the weekend, with Chicago picking up nearly four inches of snow, according to AccuWeather. Snow continued to spread farther east through Sunday into interior portions of the Northeast and Mid-Atlantic.

As the quick-moving clipper exits the New England coast Tuesday night, another wave of bitterly cold air is seen being ushered in across the Midwest, Great Lakes and Northeast. The blast is expected to last through late this week, with widespread temperatures well below zero on some mornings, AccuWeather said.

Meanwhile, forecasters are watching for the next winter storm that could pack a wintry punch from the Southeast to the Northeast late this week into next weekend. This storm could reach the southeastern U.S. late in the week and move off the Southeast Coast where it is expected to rapidly strengthen over the warmer Gulf Stream waters as a wave of Arctic air dives southward in the wake of the storm. The big question at this early stage is where does the storm track in relation to the East Coast?

The surge in heating demand boosted spot gas prices across most of the country, with gains more pronounced in regions where the biting Canadian air already had arrived. In the Midwest, Chicago Citygate jumped 41.5 cents to $4.340, and Emerson was up 55.0 cents to $4.405.

Appalachia prices were mostly stronger. Eastern Gas South cash climbed 22.0 cents to $3.945, which was generally in line with other gains in the region. Downstream Northeast markets posted widespread losses ahead of the next round of frosty conditions. Transco Zone 6 non-NY plunged $6.505 from Friday to average $6.155.