With its nuclear arm struggling against cheaper natural gas, Exelon Corp. on Wednesday said it is working on a $6.8 billion cash tie-up with Pepco Holdings Inc., a transaction that would create the top Mid-Atlantic electric and gas utility with close to 10 million customers. 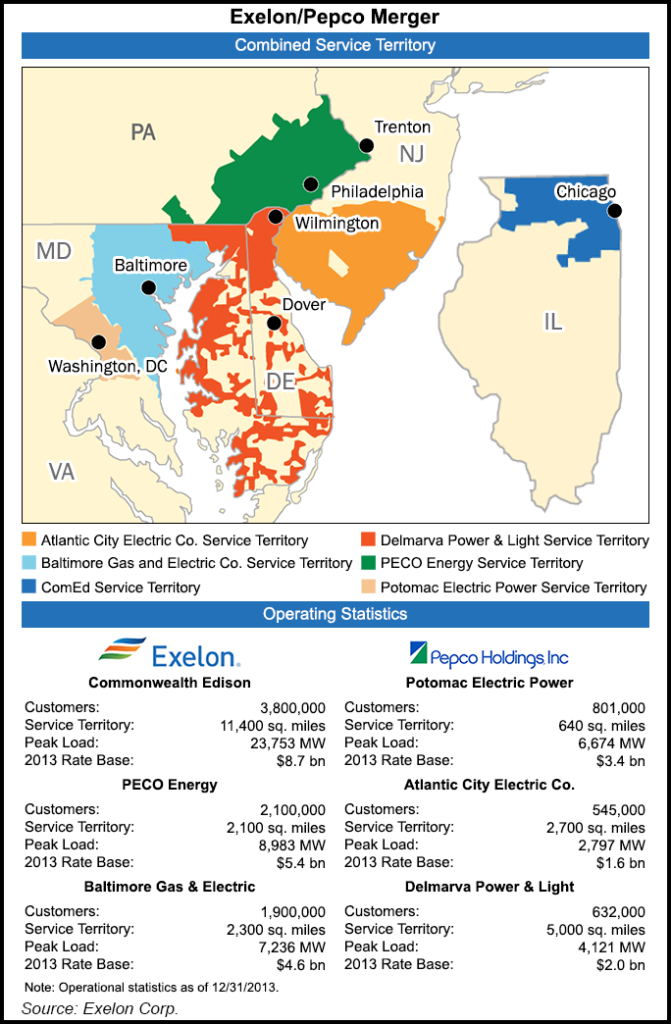 With a rate base of about $26 billion, the pro forma operations would expand Exelon’s regulated holdings and ensure a balanced earnings mix as power prices recover, CEO Chris Crane said during a conference call. Exelon’s regulated business now provides about 55-60% of earnings; the Pepco buy would increase it to about 65%.

On the news, Pepco’s share price climbed more than 17% on the day, almost $4.00/share, and was one of the biggest movers on the New York Stock Exchange. Exelon’s value fell by a little more than 3%.

The purchase would reduce Exelon’s reliance on selling power on the open market, Crane said.

“Exelon and Pepco Holdings have a compelling strategic rationale for merging, given our geographic proximity and similar utility business models.”

Exelon already is gaining an edge in gas markets, as evidenced by PECO, which reported in April that the gas supply business had ballooned to more than 500,000 customers in southeastern Pennsylvania (see Daily GPI, April 9).

Crane would continue to helm the company, with the main headquarters remaining in Chicago. Pepco, a Washington, DC, institution for more than a century, would become one of Exelon’s business units.

Pepco CEO Joe Rigby, who is retiring, said Exelon “has committed to provide what our customers most want: investments in infrastructure improvements, continuation of our long tradition of philanthropy in our communities and direct customer benefits of $100 million. Our shareholders will benefit from an immediate cash premium, and employees should enjoy even more opportunities as part of a larger company.” As part of a “family of large urban utilities,” the merger would be of “enormous value” during major storms.

The all-cash transaction, already approved by the boards, offers Pepco shareholders $27.25/share, a 25% premium to Pepco’s closing price on April 25 ($21.85) and a 30% premium over the last 20 trading days. The deal is scheduled for completion tentatively in mid-2015. It requires Pepco stockholder approval, as well as an OK by the Federal Energy Regulatory Commission and several state public service commissions.

Once approved, Exelon agreed to provide an aggregate $100 million — or around $50.00/customer — for a customer investment fund that would be used across Pepco’s service territories to provide, among other things, rate credits, assistance for low income customers and energy efficiency measures. Exelon also pledged to maintain charitable contributions in Pepco’s service territories for at least a decade, a total commitment of $50 million.

The transaction, once completed in mid-2015, would provide earnings estimated at 15-20 cents/share by 2017. The tie-up also is expected to create $80 million in net synergies.

Whether the merger will be on a smooth path remains uncertain. The regulatory process may be difficult because of Pepco’s operations that stretch into four states. Crane said those difficulties already have been taken into consideration.

“We have a skilled regulatory team,” he told analysts. “We’ll work closely with the regulators. We would not do this if we could not see a path toward closure.”