EXCO Resources Inc. executives said the company continued to apply the technical know-how it gained in the Haynesville and Bossier shales to its operations in the Eagle Ford Shale during 1Q2014, while also meeting production guidance for the quarter and reducing debt. 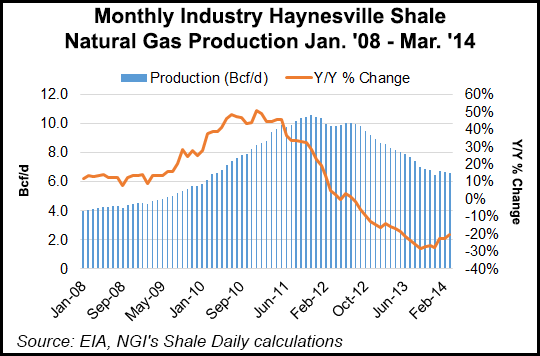 But analysts had conflicting views of the Dallas-based company’s performance for the quarter, with some taking a neutral stance and others expressing disappointment and downgrading its stock. Shares of EXCO closed at $5.95/share (down 40 cents/share, a loss of 6.3%) on the New York Stock Exchange on Thursday.

Broken down by shale play, net daily production averaged 280 MMcfe/d in the Haynesville and 7,000 boe/d in the Eagle Ford. In the Appalachian Basin, the company’s shale and conventional operations achieved net production of 61 MMcfe/d for the quarter.

EXCO currently has five rigs deployed in the Haynesville, with three targeting its Holly Area (about 30,000 net acres in DeSoto Parish, LA) and two targeting the Shelby Area (16,600 net acres in Shelby County, TX). During an earnings call Wednesday, COO Harold Hickey said EXCO plans to develop seven of its 36 undeveloped units in the Holly Area in 2014, drilling 34 wells there. Meanwhile, the company will drill eight wells in the Shelby Area in 2014.

“With the improved regulations in Louisiana, we are able to drill across unit boundaries, contact more horizontal sections with longer laterals from a single wellbore. Of course, this results in additional recovery and improved economics,” Hickey said of the Holly operations. He added that Shelby would be used as “a growth platform for EXCO, as we have an inventory of approximately 290 Shelby area drilling locations for future development.”

EXCO said it has identified 1,206 potential drilling locations in the Haynesville. “[We have] 14 years of economic drilling inventory based on our current drilling base of 42 wells per year and this $4.25 [per Mcf] price deck,” Hickey said.

“We’re performing microseismic analysis [in the Eagle Ford] that will provide additional data to help us with our decision-making and management of shut-in volumes, spacing and frack design,” Hickey said. “We’re also implementing initiatives to optimize and increase the efficiency of our oil production. We installed 24 pumping units on producing Eagle Ford wells during the quarter, and have plans to install a total of 90 pumping units during 2014.”

“We’re continuing to use the same numbers in our guidance, as far as capital planning and budgeting,” Hickey said during the Q&A session with analysts. “Am I optimistic in the Haynesville we might get a little bit more? Yes, but I’m not counting on it. But in the Eagle Ford, I’m a little more optimistic…as we continue to operate there and we continue to evaluate both our designs, and we gain experience, I think there’s some move downward that we expect there.”

EXCO holds about 290,000 net acres in the Appalachian Basin (70% held by production), including 145,000 net acres prospective to the Marcellus Shale. Hickey said the company planned to drill two appraisal wells there in 2014 to delineate and hold acreage. “Due to regional price differentials, we’ve reduced our drilling program in this region,” he said, adding that Appalachian production “has been relatively stable. It was marginally impacted by the challenges of the cold winter that caused higher than average downtime due to freezing conditions.”

Hickey said there was a chance the company could increase its activity in the Haynesville and Marcellus shales in 2015.

“We’re always looking at the opportunities,” Hickey said. “We’re going to maintain some discipline this year around ensuring that our development capital is within our EBITDA [earnings before interest, taxes, depreciation and amortization]. That said, we are looking at some opportunities that could increase, by a slight amount, the amount of activity we have in the Haynesville.

“We’re also looking in Appalachia, probably not to increase the number of wells, but maybe to evaluate where the best place to drill is, so we get volumes online as opposed to only worrying about appraisal.”

Overall, industry production in the Haynesville fell slightly on an absolute basis in 1Q2014, dropping to 6.66 Bcf/d from 6.71/d in 4Q2013. However, production declines in the region may be stabilizing. December 2013 Haynesville production came in at 6.45 Bcf/d, which was down 28% year-over-year. That year-over-year decline improved to 23% in both January and February, and to 20% in March.

EXCO said it has reduced its debt by $630 million over the past six months and currently has $790 million of liquidity. Adjusted EBITDA was $111.7 million for the quarter, which was just above the guidance range of $105-110 million. The company reported a loss of 2 cents/share for the quarter.

Analysts had divergent reactions to EXCO’s performance in 1Q2014.

In a note Wednesday, released before EXCO’s earnings call, analysts with Tudor, Pickering, Holt & Co. Inc. (TPH) gave EXCO a neutral outlook on the grounds that earnings per share were in line with expectations and production was roughly in line. TPH said there were “weaker than expected realizations offset by lower than modeled expenses across the board.”

Phillip Jungwirth, an analyst with BMO Capital Markets Corp., also said EXCO was in line for the quarter and rates the company’s shares as “market perform.”

Jungwirth added that the company’s plans in the Shelby Area, if proven successful, “could represent upside to our valuation, as we have historically modeled this area as uneconomic. In addition, we view Marcellus valuation as limited due to being outside the core, negative basis, takeaway limitations, and limited near-term activity…We continue to view EXCO shares as an out-of-the-money option on natural gas.”

CFO Mark Mulhern said there was “not much new to report” about EXCO’s search for a new CEO. Last November, Douglas Miller resigned as CEO and from the company’s board of directors, which he had also chaired (see Shale Daily, Nov. 22, 2013). Jeffrey Benjamin was then appointed non-executive board chairman.

“The governance committee of the board is actively working this issue,” Mulhern said. “We have a professional search firm assisting them. There has been some activity, but really nothing to report publicly at this point.”